A good armor for the North (Snow Region)?

We are currently playing Conan Exiles on a private dedicated server - did not play it for months. And it seems the temperature system has changed since we played last time? So we are now searching for the best armor suitable for the northern ice/snow territory. In the past the Heavy Vanir Armor was pretty good to use - we tested it now and it seems to be rubbish - we even can not pass the bridge to the Silent Legion. We get extremely cold and last time hardly managed to get back to the warmer side of the bridge.

So the question is: How do you survive in the snow region? Is there an armor that protects better from the cold temperatures? If yes, how can we get it? Or what are the tips for this region of the map?

load up on spiced steak…also there are a couple legendary shields that give you a couple bars of warmth…adjust your stats for temperature affects first though.

Welcome to the camp

For crossing the bridge in specific, there is a legendary shield that offers extreme cold protection. Solspeil if memory serves. But that is RNG. Gross.

There is a one handed sword called the Eye of the Watcher, if it isn’t a guaranteed drop then it has an extremely high drop rate, from the undead in the dry aqueducts heading north out of the unnamed city he’s a one skull so easy enough to roll. This one thinks the specific region is called the Southern Aqueducts.

Other than that… As mentioned above, spiced food. Spiced Tea if you can make it, to quench the thirst that spicy food causes without cooling you down. Very little gear that one wears seems to be as impactful as it once was as far temperature management is concerned. It’s like they’re all balanced for temperate Siptah now.

Also, the enemies up there no longer drop spiced edibles when you slay them, that used to be a convenient snack option.

Thanks for the quick answers.

So as I see now we have two options:

So either put the time playing into searching for the shield or the ingredients for the food. Both possiblities will take a lot of time. For god sake why the hell did they change this system? It worked fine with the armors. Now you have to carry tons of food or search hours for a shield that maybe can be in one of the chests. I really dislike this change.

Marcospot: I thought the Silent Legion Armor is for warm regions like the vulcano?

Edit: Ah forgot the one handed sword in the big city is maybe also an option - and what I think the easiest one from the three.

@RealLocutus if you wanna go in and out, go to Sepermeru and buy spiced pork on the market (1 silver coin a pop, really cheap). Carry a torch (equip it). You can also drink alchool and drink berry juice (water will cool you down and rust your liver

). That’s all you need. If you want to take your time, do the Black Keep and craft the REDEEMED armor. Redeemed Silent Legion is more than enough and you’ll be ready for the volcano too. Just eat something spicy before you cross the bridge and you’ll be fine. The real problem when it comes to temperature is the volcano, but if you have ice with you (and eat it), you can run around naked. God knows I did that 3 times today because of a f.ck up…

Edited for typos (and caps lock on redeemed 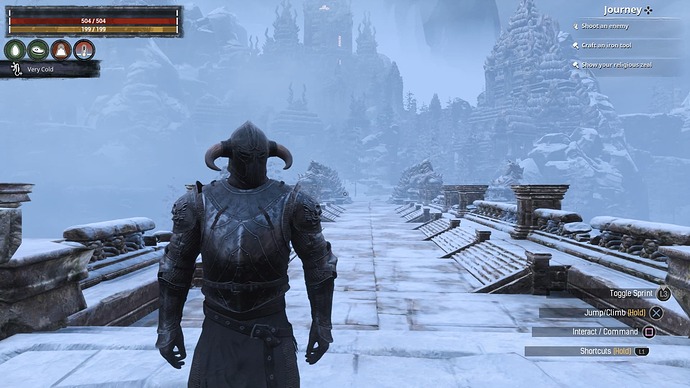 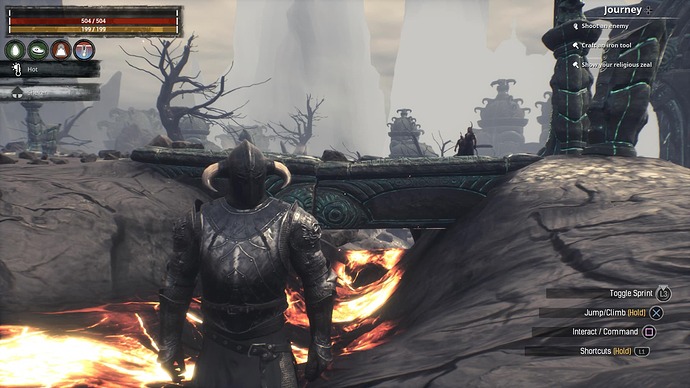 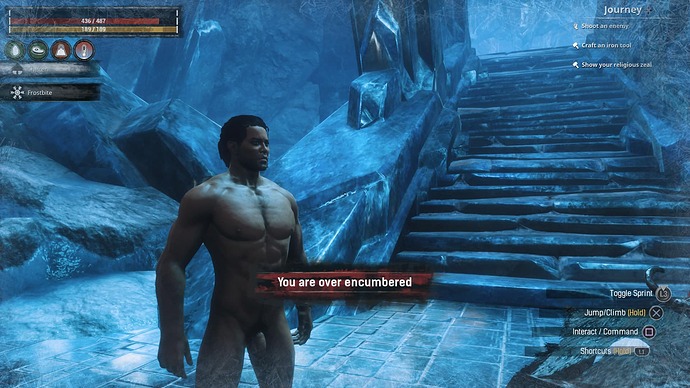 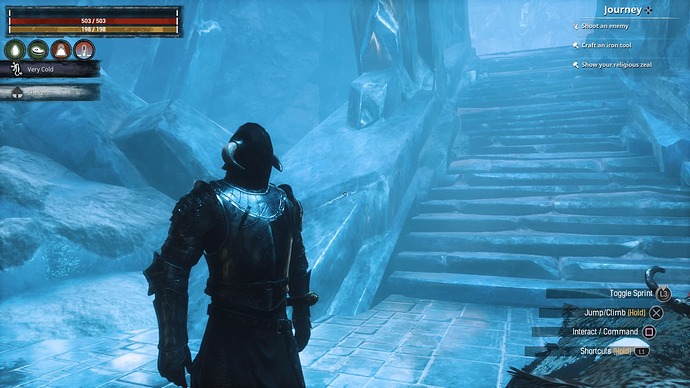 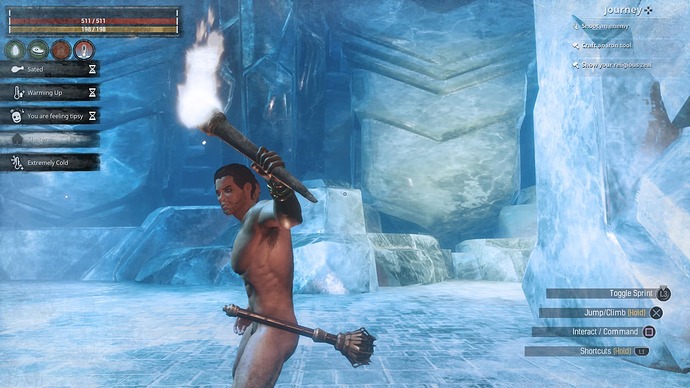 180df5b315f53-screenshotUrl1920×1080 177 KB
Inside the temple. You get frostbite naked. The armor handles it. Naked, you can survive with spiced pork, torch and alcohol. It won’t last long though, and why the hell would anyone wanna go there naked?? Unless you are getting your gear back. Hah! Your dick actually shrinks. True fact. Devs went that far in realism!

By the way, when I say torch, I don’t mean the blue torch you can craft as that will cool you (usefull inside the volcano - thanks for the tip @stelagel). It’s the regular yellow one. Regular warms you up, blue cools you down. Don’t get them mixed up as it can cost you a trip back from your nearest bedroll.

For most of the snow area, no special armor is needed. The Bridge of the Betrayer, the shores of the lake it crosses and the bottom of the Frost Temple are exceptions. There are other ways across that lake, but if you must use the bridge just ride across at full speed and you’ll be fine.

No extensive hunting is needed for cooking spiced food. Grind up any type of plant you have handy and combine it on a stove with whatever meat you have on hand. Spiced Haunch seems to be the highest grade.

If you still have the armor formerly known as flawless, the bonuses, armor mods, and dyes have all been removed. The armor value remains, so it is suitable for a thrall.

Find yourself a T4 armorer and remake your armor. Yesterday I discovered that the Heavy Armor from the base game has two cold and two heat protection per piece. I had four pieces for a character in a server transfer and it worked in the volcano everywhere except right next to lava.

The frost giants still drop a lot of spicy foods, but if you are fighting them you will want some before you start to handle the coldsnap/frostbite.

Sepermeru chests contain a LOT. You can have almost a full (50) stack of them in one run. They are the strongest warming consumables (if I remember correctly, even the fiery-hot stuff is weaker than the mulled brew, but not 100% sure, and it is a recipe found at the Black Galleon and requires the stove feat - level 29 at minimum).

And as the others suggested, get the Eye of the Watcher, it is an easy kill, if you obtain either a flanged iron mace from Sepermeru chests, or the Whaler hammer from below the Black Galleon.

This is also true.
That bridge is the coldest approach.
There are other routes that involve walking around and that don’t suffer from the extreme chill of the bridge.

This one does not recall if the bridge is the coldest place in the game or tied for the Frost Giant capital where the black ice forge is the only warm spot.

@drachenfeles
In the route there are always some places, like little traps, to have extreme temperatures. However I think that they did this to frighten the new players, the ones that don’t know that 20 or 30 steps ahead this extreme situation is not continuing.
@RealLocutus welcome to the forum. I would suggest you not to deny the spiced food option or even better the muled brew that @rolee9309 suggests. Don’t forget that food is healing too, so it’s very convenient. However I will give you a small tip if you ever find your self hungry and dehydrated in the north farm berries. They recover either hunger and humidity, plus they are all around the area, with a sickle you can farm and consume hundreds in seconds

.
Last but not least, a torh combined with a campfire, step on campfire if necessary

, can save you in really extreme conditions

Do you mean where the rockslide, mammoth and black yeti has a forest animal meeting? Above the Frost temple south/southwest up to the northwestern edge? Those 3 are the coldest places (plus the frost giants coldsnap

@stelagel I don’t know you are familiar with @KiahonfireOfficial , but she has a Conan series where the character only can be in the snow area in the Savage Wilds mod. In that mod, half of the map is snowy, compared to EL’s ~1/4.
And she showed me an awesone, cheap trick: build a triangular foundation, place a pillar and a triangular ceiling on it, place a campfire on the foundation, and BAM: sheltered and warm! You could go literally naked with this method everywhere.

Omg man, I didn’t knew that @KiahonfireOfficial was in this forum, never seen a post from her. Thanks @rolee9309

Kiah, I love your smile, thank you for all the help you given to me all these years,i wish you the best girl

How can we measure the exact ambient temperature then?

And just after I read your post I jsut reaised, you are right: If we consume some cooling stuff, the thermometer goes down, but the environment is the same we are in.
This was a long, exhausting week.

@stelagel I don’t remember if I’ve ever seen a post from her, I just started typing her name, and there it was!

I am shocked that no one has mentioned Survival here. Putting points into Survival will boost your temperature resistances. WIth 30 Survival you can run with non Epic armor inside most of the Volcano. 40 Survival allows you to go freely and 50 naked.

@SirDaveWolf
Never tried it m8, thanks for sharing

Apparently I’m the only one that uses Dragonscale helm.

@erjoh
In all the times I ever killed the mama, maybe I gained decades blades, decades reach, decades torches, less than ten lifeblood, but helms only 2. My rng is do bad in this helm, so bad. What is less grindy than this helm for me is the God breaker set than this helm, trust me

. The same goes with the doom hammer, maybe only one all these years