An idea for the future updates

Suddenly I was enlightened by the idea. As a basis of the new expansion you could’ve use merchant thralls.
The scheme is simple: player catches a merchant, trains him, then place him somewhere, give him some items and set a price for them. Items can be sold to another player for golden or silver coins or bartered for another item.
I hope, this idea will be useful and you’ll find out, how to apply it to the game. I also understand, that it could be difficult or even impossible to implement this idea to the game.

P.S. The expansion, in which traders could be added, may be named, for example, “Traders of Zamora” etc.

I see it, no easily however and surely no vanilla for free.
All the existing merchants in the game have to sell one item, unlimited, but this is not exactly what we are looking for here, is it? You want a trader, I give this for that, or an amount of this for an amount of that. This demands work, a lot of work, demands a lot of calculations and a lot of conversation. Then it demands to be easy to be used by players. The questions are many, the problems maybe many, the lags the bugs, etc…
There for my opinion here is positive for traders to exist but only as a dlc content and only one for each player with the capacity of an iron chest. They should be not thralls but Placeables and immune to all possible vulnerabilities of the game, which means nobody and nothing can harm your trader.
This way we have both sides win. Either the company will gain profit for this project and we will get what we need.

@stelagel in any other scenario it would be open season 24/7/365 for trader thralls. They would have to make them invulnerable. I see immediately the possibility to abuse the system on pvp.

Walls packed with traders, jamming ruin entries, etc… Definitely these would be the new vaults and nobody would use them for their intended purpose!

The only way around would be to make them vulnerable, but their goods would go back to the owner upon their death. All in all, too much trouble for a very small gain. I love the idea, but knowing how things generally go…
I can see the new bickerings about how many traders could you stack or put on a wall!

They could be simply ghosts, that do not absorb or walling targets, and this is exactly the reason I said only one per person in each server. All the dlc packs can provide items that can be gifted to others, traders won’t. I have the dlc and I can use just one per server so I can’t gift it

. A trade system is very important in the game, we ask it long now. My suggestion was charity tables, I like to gift things in my pve official servers, my trader would ask 1 fiber for a legendary weapon

. So far @Etnograf bring (for me) the most brilliant idea I ever read here. I can see it working but not for free. I would gladly pay 10 Euro for a trader and some smart Placeables ofcurce that would helped me to fix a beautiful trade post

. I wish devs will consider this idea.

@stelagel it’s an interesting way to go about it. Let’s hope they do it.
Anyway, I’m a sucker. Whatever they create, I buy immediately. Don’t think twice even…

Worse is I never regret it. I never used a single Khitan piece. Do you think I mind? Not a bit, because in the future, who knows? That’s me in a nutshell…a sucker!

RE EDIT and some furniture and tapestries, now that I think of it… see? It was worth it!

Paying for this game never felt like a sucker and I believe you either. They worth 10 times the money we gave already. Imagine how many thousand hours you spend in this game and if you calculate it then you’ll get my point. We are winners here not suckers.

Couldn’t agree more. I was just trying to be funny.

I never regretted a single cent I payed for Conan. It was money well spent and I will gladly keep doing it as long as their content keeps coming out. I really enjoy the game, despite its unavoidable flaws, @stelagel .

The Mod Pippi has a thing called a “thespian” they are accentually what you describe, in that they can be set to merchant and sell whatever the player gives them.

Only they are considered a “placeable” by the game and not a thrall.
In light of the fact that a crafter thrall is also a “placeable” only into a bench.
I think what you are asking for is possible, we just need enough people on board to sway FunCom into implementing something along these lines.

Only they are considered a “placeable” by the game and not a thrall. 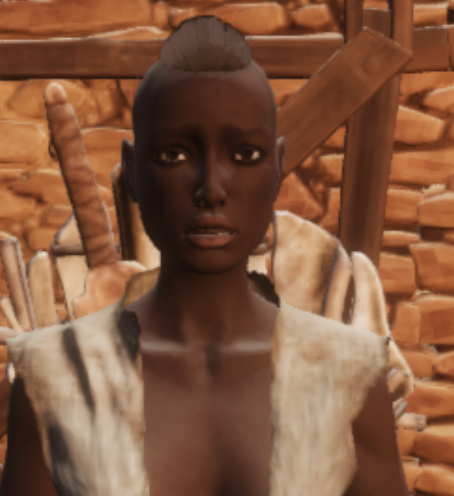 My Thrall was sad a lot of people come to my discord asking what is the difference between my mod trader and “thespian” from Pippi.
I never had and I never will install Pippi. But now I know what is the answer. lol.

As for the topic at hand:

There is a way a mod can add vendors that the game does not like the ones in Sepermeru. They are set up by the table of dialogue and you can work them to function without strictly adding the voice things and etc, or use the ones already in the game. But they will work as they work in the game. They are flexible and you can really set up stuff in many ways, I am not not sure as to why the game does not offer them in more formats and why people who makes maps for mods and some other stuff just dont add them that way.

However, to add a trader that will work as a Thrall for people that are not in your clan, it takes a bit of “smoke and mirrors” to show something as a trade happening, but not happening codewise. And that might be why this “thespian” you speak of is a placeable, not a thrall.

I myself dont care about pvp when I am making my mods, and that is why I really just run over a lot of stuff in them. But I think there will be some work to be done to get a fully customizable Thrall that can work as a trader and still not conflict with some pvp stuff.
Afaik, that is the only thing that prevents the core game to simply have a thrall that performs the function of a trader, and as to why trading between players also is not a thing.

My Thrall was sad a lot of people come to my discord asking what is the difference between my mod trader and “thespian” from Pippi.

First let me say thank you for being a moder, I’ve never tried any of your Mods but I appreciate the effort moders put into their work.

I was only using Pippi as an example that such was possible, I didn’t know of your mod or I would have mentioned it as well.

That is mostly why I dont use it. I am more of a Co-Op/Solo player, and my mods are designed for that crowd too. That might be the reason many people do not know about my mods.

I am more of a Co-Op/Solo player

If this is the case, I don’t see a need for a merchant thrall at all? even in a co-op.
for example on live official PVP server, we trade by simply placing an open chest then putting the items for trade in the chest.

I have asked for a method to do this trade method on a PVE server, but the thread was derailed.
(open but lockable containers are one of the reasons I tend to play PVP more than PVE)

Unfortunately PVP is unplayable right now, because of toxic server hoppers and ESP “features” in the base game.

If this is the case, I don’t see a need for a merchant thrall at all?

People who play in servers and like to play with other people dont really get the joy of playing alone and pretending you need to do stuff the hard way even if you dont.
I had the tradebox mod, which was directed to servers, along with the renting service for rooms in an Inn, but when I stopped playing in server at all, I also stopped developing those. On that moment people decided to tell me they actually used and liked the mod. lol
I actually stopped developing server mods exactly because I had no feedback and therefore I couldnt really update it with ideas, and the lack of feedback made me leave it altogether.
The merchant NPC then was removed from the original mod that featured the Tradebox, and the Renting room feature, to be only the solo game part, which consists an NPC that gets stock and stuff to sell from the number and types of crafters you have, based on something that works more or less like the “Garrison Mission Table” from WoD in WoW.
For now it is a friends only feature because I just took out the mod that was for servers this month, and I still working some loose ends before it can go public.
When I had the tradebox mod up, all the time people asked what was the difference between mine and that Thespian, and I never really understood, because they were completely different things.

Something off topic here but very relative, you can understand the difference between kebab ans souvlaki only if you eat them both. They both taste marvelous but they are totally different things, the only common is that they are wrapped in a pie, but this is not a reason to be the same. I really hope you’ll fix a mod that Funcom will appreciate and buy, so we will all enjoy it too. No matter if I am a console player, I know that right now in my vanilla version I enjoy moders work, so I thank every single effort all of you moders do, please keep it going, best wishes for all of you.

you can understand the difference between kebab ans souvlaki only if you eat them both.

On the other hand, more to a relatable analogy, you dont need to kiss a human and a komodo dragon to know which you will prefer. Something to think about.

My experience with mods was with fallout 4. With mods, it was a completely different game, much, much better. My first playthrough was clean. After that I run more than 50 mods plus some CC. It was a blast, although stability was an issue.
In the case of Conan, I prefer not even knowing what I am missing. I know it’s a lot.

The expression “this food did not agreed with me” comes to mind.

But the statement is not about the feeling of a kiss. It is based on the fact that Komodo Dragon saliva is poisonous and probably will kill you. Knowing that, you dont need to kiss it to know you might not want to.

But I now recall an example that will show exactly what I mean in the same “market” I mean it: