So I threw this out as an idea on Reddit and was told I should put it up here.

Currently all armors come tied with some form of stat bonus. This is good but not great, the problem comes up by everybody being forced into wearing the armor that fits into their character build of choice.

My idea is that all armors come blank of stat points. Then under the armor modding kits give us more options with upgraded quality currently as it is now Basic - Intermediate - Advanced. From a RP perspective it really sucks being forced to wearing certain armors just because it increases my strength or whatever build i’m going for. With the change to armor mods people can craft whatever armor set they like the looks of, or even mix and match parts that they like and then craft the armor mods to attach on for their build points needed.

If I really like the thief armor and am RP as a rogue archer sniping from rooftops then of course thats the gear choice i’d want to go with for looks. But that would hinder my build as far as archery goes.

TL/DR: Armor is just cosmetic and weight/armor class. All stat point bonus are tied to armor mod kits you craft and apply to the armor pieces.

What do you guys think?

Theres a similar thread going in Gen discussion that I didn’t notice and I cant provide a link to it sadly.

Really like this idea. Would love to see something like this implemented. Can have rare mod kits off of t4 thralls or hidden away in other places. Thumbs up for a great idea!!!

This is a super idea. I’m so tired of the shaman armor while there are so many other cool designs out there.

Let the armor decide its armor rating, dodging and heat but let us tailor the stat gain.

This also fits great with the DLC cosmetics, letting you show off your armor even if the stat is wrong.

100% agree, i dont even use the shrine armor for this exact reason, tired of everyone wearing the same armor all the time cause its stats are stuck in stone

This is a winning idea!!

And some ingridients for craft may drop from World Bosses Chests.

i think they should still come with their default stat boosts, but should be able to change them, right no i rock the relic hunter armor and pants and the medium armer gloves and boots cause i need their stat boosts but i get left behind in def cause of it

I like this Idea but the question how much work this would take but that would fix the problem some people have with the Silent Legion Armor.

I really like this idea. So many good armor designs in the game but I can’t use almost any of them due to the fixed stat bonuses.

Would also like options of adding “padding” to give cold resist or something similar to give heat resist.

Ok, stayed up way too late after reading this idea and made something of a crude mockup for how I think it could work. Please forgive the unpolished nature of the following image as I’m not good at these kinds of things but hopefully it helps illustrate the idea, 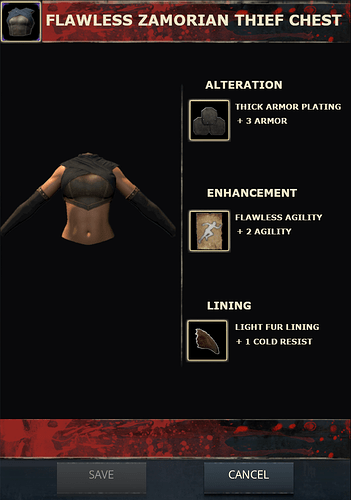 So quick breakdown of the different slots:

ALTERATION: This is basically the slot for all the existing armor modifications in the game (Armor Plating, Reinforcement Kit, Armor Reduction Kit, Armor Flexibility Kit, etc.)

ENHANCEMENT: This slot is used for the attribute bonus modifications which would be added with this system. Potentially craftable at the firebowl cauldron.

LINING: This is where you put the environmental modifications, fur or insulated lining for cold weather protection and reduced or light linings for heat protection.

My idea for this is that when you craft the armor the Enhancement and Lining slots come already filled with mods that are equivalent to how the armor currently is on live. You can’t remove modifications but you can replace and overwrite them so if you craft or find a better enhancement or lining you’ll be able to apply it over top the old ones and get the new stats instead. Same goes for the Alteration slot where you can replace the alterations you add with different or better ones down the line.

Anyways that’s about it, let me know what you guys think.

This is a very good idea, I hope a Dev takes a serious look at it. Well done.

I too hope the devs see this. Its a good idea from Deenol.

This is one of the best ideas i have heard in a long time!

Then you could make the upgrades dependent on the named Thralls, that would be amazing and way easier to balance.

This is, in my opinion (as well as others i can see) an incredibly great idea… It would fix the monotony of people running around in very specific armors, thinking of one specifically myself ofc but thats besides the point, and would really give a possibility of all armors being used, instead of most just being thrown to the side, because their statbonus sucks…

I would like to see a slot for the heat/cold too.

So if we could mix and match these that would be coolest thing in this game.
3 slots in total:
1 for the stats bonus we want to assign.
1 for the cold or hot protection upgrade
and 1 for the useability upgrade (flexibility, armorplating, reinforcement…etc the current ones)