Please Also Spread This Poll Survey LINK Arounds to People And Sites Not Typically On These Forums.

First this thread is only for polling as a way to consolidate the wide range of opinions expressed in the “Battle Pass Feedback Thread”. As that thread is averaging 120 posts a day it is a little difficult to follow. If you would like to bump this thread by posting how you voted or something, that would be nice but if you want to discuss or debate anything other than the poll itself please do so in the original Battle Passs thread.

So, based on your understanding of the current Battle Pass mechanics as explained in the first 16min of Wak’s Wonderful Video Explanation - and I would encourage you to watch it if you haven’t yet or even watch it again if like me, you have become confused by all the text generated in the Feedback thread, please select the poll option which best fits your thoughts and feelings.

I feel these three options represent the overwhelming bulk of opinions expressed in the discussion thread. If there is a fourth or fifth I neglected please say so ASAP and I will add it in.

The results of the “On-line Poll Survey” mentioned at the top of this post: 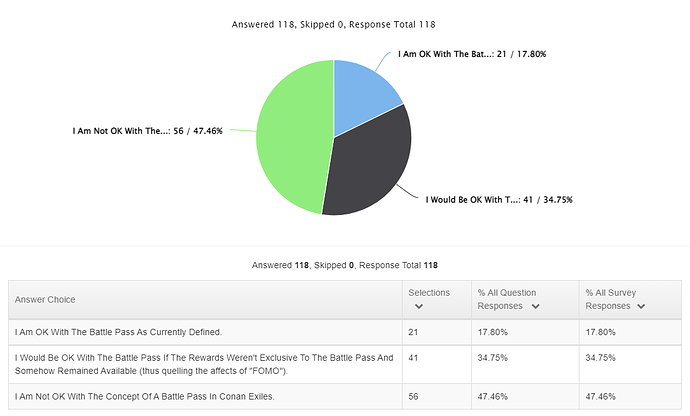 You hit the nail right on the head for me. Flavour of the Month. It’s very stressful for me to have to dedicate time to a game or else I might miss out on things I might want later on and end up regretting not having spent the time to obtain them.

As long as nothing in the battle pass turns out to be unintentionally pay2win idgaf. i just expect funcom to roll out patches faster since they’ll be rolling in $$$

better not have to wait months for a simple dupe fix from now on.

Would be nice if we keep opinions and preferences discussed in this post Battle Pass Feedback.

Wouldn’t want the votes to be influenced by comments directly below the poll.

I tend to agree. I expected some crossover but I think if one just replies with:

in order to bump the thread or whatever then it’s all good. But if we start replying to each other with arguments, reasons, and rationalizations then it’s going to be duplicating too much of the already existing Feedback thread - which is already difficult enough to follow without splitting it between two threads.

I think voting should be a little more private, I don’t want to post my preference cause it might influence someone else’s choice.

Yeah, best case would be no replies at all - just watch the poll numbers.

I would say any interpretation of data should be on the feedback post. This should be data collection only, but hey your thread.

I think it would be better to host a poll on an external site and share a link on Reddit and steam forums.

Good idea. I made the poll. You or someone else can pass it around:

Worry not about it, if admins of the @Community see that there are posts here necessary for feedback, they will move them to “your” battle pass feedback thread. They already did it in a couple threads that had the same cause, so no worries

.
One thing all of us must be aware of and understand is that our posts belongs to them to handle. We just have the illusion that the posts are ours

. They “push” and they “close” only. It’s their job and they do it excellent.

Thanks! I just made a post on Steam forums. Could you make the results visible to everyone? I’m not sure how to access them >_>

I could try. Gimme 12 or so hours and I’ll see what can be done. I can see the results but that might be because I made the poll - dunno…

EDIT:
I don’t see a way to do it @Nalier… but I could keep refreshing a screen-grap once a day or so and paste it in the OP. Here’s that for now: 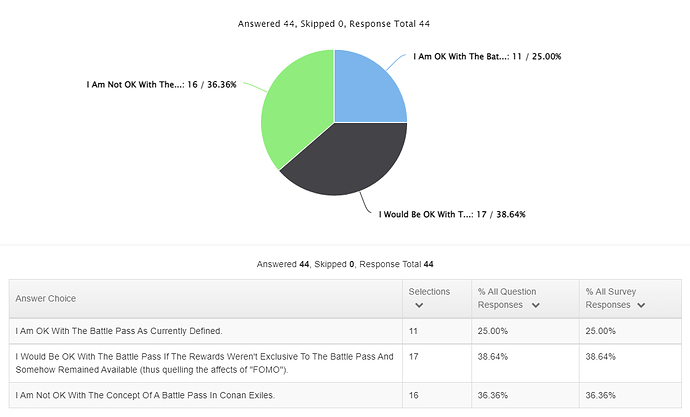 Do we really need to vote again?

I’m sorry but the system is flawed… you can vote more than 1 time.
Obviously this will be the outcome…

You can not vote more than once in any given poll so the ratio will be relatively the same. And this isn’t exactly highly scientific in the first place. I made these so people wanting to know the general consensus could take a glance and see about were people were on the issue. Maybe even so FC could see if the direction their headed in is correct enough to proceed.

Do we really need to vote again?

I see your point here though. I changed the language to fit closer with the intention - maybe that will help.

The thing is, my bet is people who are OK with the battlepass are much less passionate about it than people who are against it. I would guess most won’t even bother casting a vote. However, the opposite crowd is more, let’s say, activist minded. They are voting against much more than this particular pass.

Just what Marcospt said is true about the passion being against or in favour.
The poll gives a average but sadly its too easy to cheat.

Whatever the outcome will be, I hope Funcom will make the right decision

18%I Am Not OK With The Concept Of A Battle Pass In Conan Exiles.

But I better step out now I don’t want to ruin the thread by whining about it lol. I just wait and see.