Can anyone tell me what’s wrong with the following picture? I’ll give you a hint… You use it to harvest rocks and ores. ] 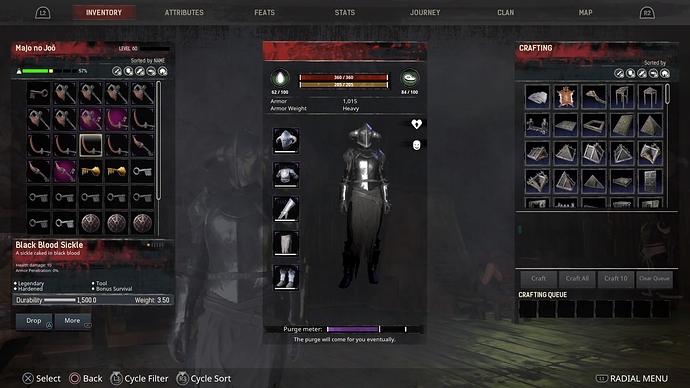 Steps on how to reproduce issue:
1.Farm the Demon Vulture
2.he wont drop the Black Blood Pick

as you can see I was there a long time
is the drop rater lower or something?

I ran it for about 2 hours and almost got 2 complete sets, just missing another skinning knife.
He drops the pickaxe. It’s just bad RNG. I did Asagard for about 10+ hours total now and I’ve just finally found 2 Beri’s, still not a single armorer.

Good RNG gives you 2 items at a time.

I had a whole chest full of Pickaxe, sickel and axe until I got my first skinning knife… its rng

Yeah it’s just rng. Good luck on ur next try

I got 2 items almost every time but to be there for soo long and not get a pick, feels like something is wrong.

BTW all 3 Skull enemies in the caves can be harvested for skeleton keys, except the southern most cave as he just drops it on his body.

I just got the BB Pick… But it took forever, this is how many items I got before I got the pick, minus the upgraded BB Tools… add the tools from my first screenshot and this one for the total. 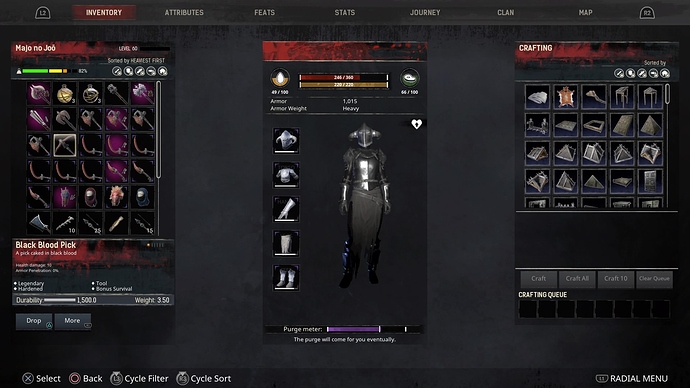 Can anyone tell me what’s wrong with the following picture?

I know…! There isnt a Black Blood Cleaver right?

The Cleaver equivalent to black blood tools is dropped by Rake/Claw @ The Den.

I know Vampurrism and I already have one. I just wanted a full-matching set of Legendary tools. Its an OCD thing.

Like I said, I had a full chest of BB tools (45!!), until I got my first skinning knife, which is bugged anyway.
But congrats

I farmed there for days!!

Also when I farmed it, only the BB tool boss crow and the one with the specialist ammo recipe boss crow dropped Skeleton keys.
The 2 in the middle caves didnt…

I have 4 BB picks, I have the set complete.

These are not crows, they are harpies.

They are mutant nightmare birdies