The blackblood skinning knife has the same harvesting rate as star metal. Shouldnt it have the same as obsidian, as it is obsidian with blackblood coating/crust and all the other blackblood tool have obsidian harvest rate?

And will the blackblood butcher knife be added?

I even farmed it new (+ the hollowbone arrows) and it is still the same as starmetal without any modkit. 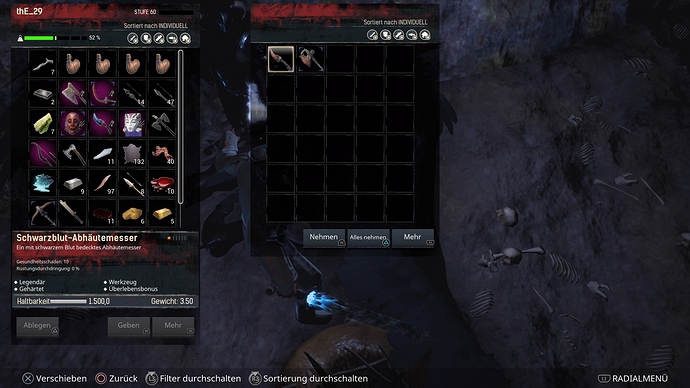 Hello @jot29, thank you for getting in touch!

We’ve passed this on to the developer for further considerantion, as it might not be intentional.

No plans for the butcher knife, but we’ll register it as a suggestion.

No Black Blood Cleaver…!? Arghh Hugo that will drive my OCD crazy not having the full set.

you have a cleaver legendary from hyena “mat Hyena cleaver” or like it.

Has way less durability and doesnt give you +5 survival, so I dont reach the 2nd peak.

Should probably look at all the Black Blood tools, Prior to the update I was getting 22 - 24 stone per hit with the pick and same attribute setup. Now getting 16 -18 per hit.

Wow… on ps4, where there was not even a hotfix (will come next friday for consoles)…

So that was silent nerfed, because nothing was listed in the changelog…

I got around 22 with blackblood pick and survival peak2.

Any attachment on your pick?
Official server?

I do Fastorro, and thanks for the tip. However it is more just me wanting to collect and use a matching set. Actually on that note, I could have sworn that I read elsewhere that the Black Blood Skinning Knife and Cleaver were accidentally forgotten, and would be added in at a latet date. Although do not hold me to that.

Yeah, the old kit for better harvesting rates. No oil.

In one dev stream they said, the reason there is no blackblood butcher knife is, they only forgot it. There was no reasoning behind it…

The skinning knife has this bug with the harvesting rate…

I think that is the one I am thinking of jot29. However, I also thought that in the wake of it being pointed out that there was no meat Cleaver, they would add one in at a latter date. But again I may be remembering incorrectly here. Its not really a big deal for me, jI am more just thinking out loud.