I’m not entirely clear whether this is simply cosmetic, or something is broken with the purge. The purge meter is progressing normally from what I’m seeing, but it would seem to indicate that a purge is imminent, even though it shouldn’t be. 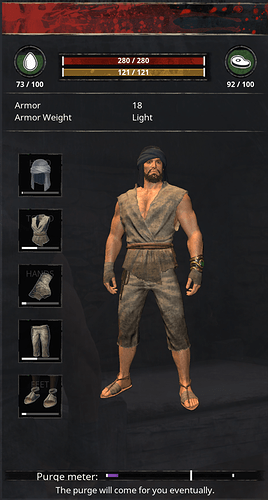 I wish mine was broken as 3 raids in 7 days and the new hard ones in the highlands as they kick butt and tag team think the new purge groups buggy. We see more and then say as feel like two purges at the same time over 20 fighter and horn goes off and still have more to fight… even when over had more to fight… Than was with 7 clan all LVL 60 and we died a few times…

That’s all kind of ouch.

I decided to start fresh on a new server, just to experience the game “as new” without legacy thralls, etc. and see what the experience is like from the ground up. So far, there’s things that are certainly easier/less annoying (increased stack sizes eliminate a lot of map running, which I appreciate), but overall more challenging I think (why, hello there corrupted shaleback that I didn’t see at night!)

But the stuff I’ve been reading about purges makes me a bit apprehensive. This is a stock, vanilla PvE “purist” server config (it’s not a single player game, it’s a server with no buffs of any kind with purges at level 6) and I’m solo. The idea of getting a purge down near the southern river means I need to expect I’m going to have to grab the few thralls I care about, my horse and get the hell out while the game destroys my base. All part of the new Conan Exiles experience, I guess.

Hello @Megaton238, both the current message and purple tone mean that you’re eligible for the purge when it is spawned, which would be after the bar grows up to the vertical mark. The message itself is intentional and changes if the bar is white, which means that you’re not currently eligible.

Interesting, that’s changed then? I don’t recall it ever being purple below the 75% mark, either in single player on the official servers I’ve played on. In any case, good to know it’s not a problem with the purge itself.

I am always purple… even during a purge.