Cannot use DX10 anymore since last update; constant error on launch of game

Since the last update I can no longer apply DX10 and the launcher spits out an error every single time I launch it:

I have tried reinstalling the game twice; disabling AV, removing AV, disabling everything except explorer and AoC; issue persists.

Is this fixable or should I just move on to something else? Thanks for any assistance.

PS These are my system specs:

I think it’s windows 11 related just click ….attempt to continue….and it starts the game fine ……or download the AoC starter which cuts out the patcher and just opens the game so you don’t get this message every time 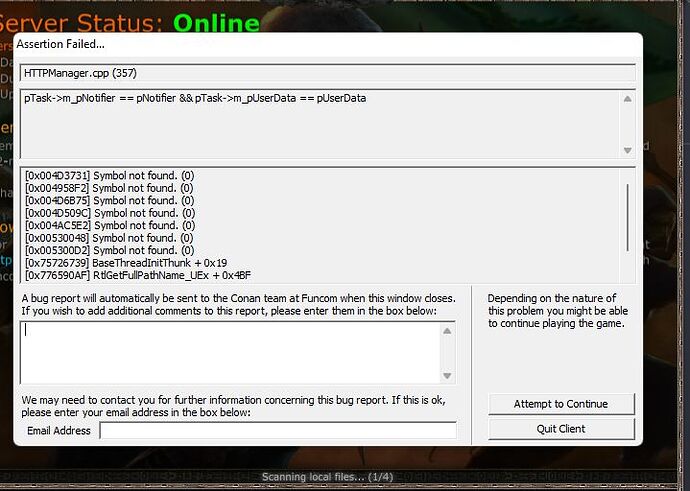 Started only recently, and as Bennyboi says above when you click on Attempt to Continue the game starts eventually, but still an annoying thing to see every time you launch the game.

Andy, maybe forward it to the right people for checking?

Age of Conan has no developers, this wont be fixed.

Cannot use DX10 anymore since last update; constant error on launch of game - #3 by Hobolas****

Sorry should have mentioned I’m on Windows 7 Pro 64bit. Yes I can click and contineu; but the issue is that now I can no longer use DX10 at all; if I enable it in in settings and go to restart the game to apply it; then I will just get this error again and DX10 will not be applied at all.

Well if they still do updates; it can be fixed. I’m fairly certain at this point that it was the last update specifically that caused this.

I wouldn’t consider the weekly server restarts as updates. They’re just literally restarting the servers. Funcom has maybe one or two people left who know the coding behind AoC, and one is the CEO. The other person is probably working on the Dune game while porting AoC armors to Conan Exiles on his coffee breaks.

I’m talking about downloading files and applying them.

The last time the game was updated, with actual content, was the Kuthchemes grindfarm, and the Skull Gate Pass stuff, which was 2ish years ago.

Dx10 crashes to desktop when it loads the in game engine from login screen. Occasionally i can get it to work for a few minutes when adjusting the quick start config program but it will always crash within a short period of time.