Hi, here to leave honest (disappointed) feedback on how bad these Thralls have been nerfed.

One of my Cimmerian Berserkes has 49 + 28 Vitality (which means he has 76 VIT) and the bonus he gets from that is just ~2500 health. Which means that every point in VIT gives him roughly 30 HPs.

30 Hps per VIT is RIDICULOUS for a Thrall. No T4 should have HPs that low.
Relic Hunters with the same VIT swould have 3 times their HPs. Is that what the meta wants ? Cimmerian Berserkes out of the meta ?

1 Like
Let's have a discussion about power balance around thrall vs monster vs player
WhiteRabbit September 16, 2022, 3:51pm #2

The living humanoid thralls have really got a bad deal in 3.0, for sure. Very disappointing.

But you may not realize that for your berserkers low vitality it is still the hardest hitting thrall in the game.

It is, but the difference with RHTS is not that much, and considering they have 3 times the HPs of Berserkers, to me, looks the Berserkers got out of meta.

relic hunters are sort of half a tier above berserkers though.
They’re also only accessible in groups in UC or inside an endgame dungeon (granted which made their capture easier since they’re right at the door…)

I think it has to do with them being called berserkers, probably wanted to make them feel a bit more like glass-cannons instead of more well rounded followers, just speculating here

Is this for real ? That Build are you running?

At this point if you run a Str Tank build can kill and fight all the bosses in the game as ■■■■■■ told you in the 3.0 Trailer is there make you the hero instend of you Thralls i run the Berserkes and the only job for him is to tank the dam so i can kill the boss / mobs easy

if you like you Thralls to do Crazy Dam and have tons of HPs go full Authority - go Well-Trained.

But then they got to be CANNONS, not firecrackers.
Give them another 0.5 / 0.75 on melee modifier, then it would make sense for them to have that poor HP pool.

Otherwise they’re just giving up half their HPs for a +0.04 in melee modifier. Totally not worth it if you ask me.

I’m not sure how you rolled such a bad berserker but when I get mine levelled they run 4-5k which is more than enough hp. Put them in real armor and feed them real food

And no, they are not enough as they can’t even defeat the Ritual Boss on the Bridge of Betrayer (and it’s a lv.19 one with EPIC Armor and Weapons). And of course I did help too.

When it was about half HPs, my thrall was at 10% and we gotta flee.
So NO, they are not fu**in enough, unless you only use it to hunt deers.

@Graphx_MoA really? In a STR tank build u still need a thrall to tank the damage for you??? Mind=blown. I dont

They already have the damage boost you’re suggesting. Its in the hidden modifier. Its actually higher than you suggested. Those Berserkers do a bit more damage than you do, unless you go full glass cannon.

You can see this if you use a mod that gives floating damage numbers.

Ah, didn’t know that… and why Funcom has these things hidden ?

BTW, I’ve found this, don’t know if accurate but if it is, then Berserkers are DEFINITELY out of meta: 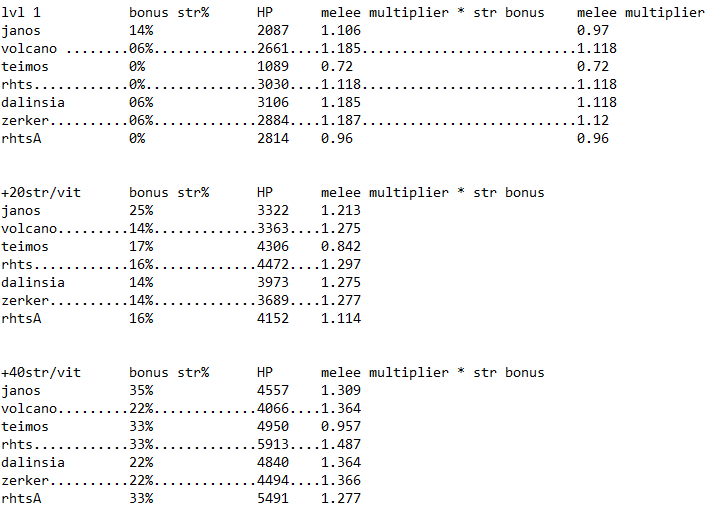 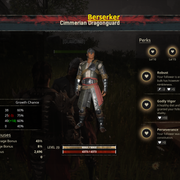 And no, they are not enough as they can’t even defeat the Ritual Boss on the Bridge of Betrayer (and it’s a lv.19 one with EPIC Armor and Weapons). And of course I did help too.

No offense but I can solo any and all of the event bosses without a thrall. Either you rolled the worst possible berserker ever, or you weren’t pulling your own weight.

Have you tried feeding your followers? They maintain a lot more health if they have food to eat.

Dam I hope that chart is out dated. RHTS have always been good jus coz of their agility armor bonus making them so tanky, but low damage output. Where as zerkers were the opposite, really high damage output but low hp which made them great for the PvE but kinda bad for pvp where they would be fighting mostly Teimos who is like boss level hp but say mid level in the damage out put dept. but poor dalinsia, she used to be a beast when I started playing, really the only thrall that could go toe to toe with Teimos and over the years she’s been nerfed down to common bar wench

Long story short. Its to keep the NPCs from being trivial.

The modifiers are a side effect of making NPCs from ‘harder’ tribes more dangerous. From what I’ve been able to see, NPCs have a very basic set of stats. Basically everyone is like an exile you find in the noob river.

Then they add modifiers over them. There is modifiers for tier (1-4, and I think some other one, I don’t exactly remember there). Modifiers for tribe (Forgotten Tribe, Black Hand, etc.). And some modifiers for specific named ones (the most infamous is the Arena Champion).

If they increase these modifiers, they also hit harder in the wild. In Beta I actually asked why they couldn’t simply make all the modifiers 1.0 (effectively removing them) and making them based purely on the visible stats. And then boost what they get from the stats but standardize them.

They liked that idea, but the reason given for not doing it is because it would trivilize the NPCs in the wild. Basically Cimmerians and Relic Hunters would simply fold over like Exiles.

There is a way to divorce these stats. But its a ton of menial and time consuming work which is why it hasn’t been done yet. Which is time spent away from other more important things.

Now with all that said, I’m going to say something that you’re probably not going to agree with. But these thralls being toned down was something that was asked about for a long while. I’m going to use Dalansia Snowhunter as an example in the timeline since I’m most experience with her stats over the years.

When she was first able to be thralled, she had no stats. Just HP and attacks and the Armor was whatever you put on her. So if you gave her a 50 damage weapon, it did 50 per swing as normal. During this time she has 750 health. With no levels to gain, she would never see more than 750 health.

Sometime later we got the ability to level our thralls. Thralls were boosted during this time. Now an average Dalansia had around 11,000-15,000 and sometimes even more HP. She also had a 4.7 melee damage modifier. That translates to a 4.7x bonus. It wasn’t often to see her do 600-700 damage or more with heavy combos with a Sword of Crom.

There was an update between then and now that reduced thrall effectiveness. But it also reduced boss hp by 30-50% across the board. Dalansia was reduced to 2.21 melee modifier. Her health was also reduced to the 6,000-9,000 prior to 3.0.

Many of us giving feedback simply stated that was still far too much. They reduced it further in 3.0 to the values you see now. With values of around 3500-6000 for health and the 1.275 you see in the chart. The idea is the thrall isn’t supposed to outdamage the player using them unless they use the Authority stat.

Dalansia Snowhunter and like tiered thralls are now minions of the player. I personally think they are where they need to be. The only complaint (and FC is very aware of this complaint) is that players cannot really see where their stats are coming from.

I do hope that the hidden modifiers are either displayed on the stat page. Or eliminated entirely and the visible stats have an effect that brings them up.

My suggestion was to have all stats, Strength, Agility, Vitiality, and Grit on thralls and followes give the exact same bonuses one for one. But stronger thralls would simply have higher stats and that is what makes them stronger. This way if you see a thrall with 45 strength and another with 34 strength, you know the 45 STR does more damage. No matter what thrall it is.

One of the examples I used to illustrate the issue I was looking to fix prior to 3.0 was comparing a Relic Hunter Treasure Seeker Archer to Freya. IF the RHTSA had 0 Accuracy, Freya would need 61 Accuracy to exceed the RHTSA damage by ONE point of damage using the exact same gear. Without having access to the wiki, admin commands, or the devkit, one would not have that knowledge.

This isn’t as bad as it was prior to 3.0 since the modifiers were generally reduced, but they still play a major role. So hopefully they do put in the work needed to bring this stuff to light.

I’m sorry that doesn’t help with your issue with thralls not being as strong as you’d like them to be. But I do believe the thralls are fine as far as their levels of power against NPCs is. Between the Authority attribute and follower damage gear you can equip, you can get followers to do incredible amounts of damage. Even surpassing 3.0 if you choose to specialize.

@Taemien no offense but I’ve said before that I feel the wants and needs of the community as whole is often very misrepresented by the few people who they do listen to. You can’t seriously compare a thrall, which is a flawed AI to a player who can dodge and spam and even retreat if necessary. Even if the thrall hits twice- four times as hard as the player the player can avoid, dodge, retreat, heal etc. The thrall is already disadvantaged vs players by default so it really doesn’t/didn’t matter how strong or op they were coz they were an easy read and the player can respawn an infinite amount of times, the thralls cannot. Even with the robust kill box I was talking about the thralls were easily exploited by players, it was just time consuming, fair enough, why should everything be so easy for the raiders. 8players and 8 thralls vs 1 player with 50 thralls and most likely the numbers will still triumph if they’re willing to put in the time and effort but now the victory is really just handed to them. Especially if I have run with an inferior fighting build just to make 1 single thrall tougher. No point, I’m stronger in full build than that thrall but I’m still just 1v8. Where’s the home court advantage? It has been removed. I actually should have the advantage of numbers and position but I don’t coz it’s all been nerfed in favor of some sweaty raiders. The old system worked fine.

The old system was thralls with only a few hundred health and no bonuses.

PVPers handled it just fine in the same situations you listed.

That system obviously didn’t work for players coz they started boosting thralls……I haven’t been playing since release.

Also fair to point out that you’re not an average player of official pvp servers. You are an admin on modded private pvp servers. Yet you consider yourself the voice of the pvp community

yeah I honestly don’t think you can speak for official pvp players, but we’ll still listen

Official pvp is not the only “correct” way to play the game, nor should every single thing be wrapped around it.

And as someone who used to play that way, all I’m hearing still is people who can’t get good and instead want the game to handhold them. Pvp before thrall pokemon was actually skill based, whereas now it’s about who’s a better babysitter. In pve thralls have become a crutch, people like our OP unable to actually play the game for themselves without their thrall carrying them through every fight.