There are two modules needed: Static, and Static Cling. If the second one isn’t active, it won’t award the achievement. And to be clear, you need to dodge one each and every time Static is applied.

And just to reiterate that, cleansing Static Cling will break the achievement. Even if it’s a passive cleanse (hoop gadget, for example).

I definitely saw the “static cling” module. I don’t remember specifically seeing static module, but i assume static module is required in order to have the static cling module?

Static is indeed a requirement for Static Cling to show up. Cleansing Static Cling after you dodge shouldn’t break the achievement.

Hey @NeuroPsych, I had the exact same problem until someone told me not to cleanse at all. I didn’t, I got the credit. Cleansing static after dodge will break the achievement. It did for me the 10’s of times I did it.

Hi all, just trying to work this out myself. I do not see any named cast bars for Static or static cling. I am assuming they are the big yellow and red circles with static electricity in them though

(seems obvious enough lol) Can I add those to my Effects UI? or is there a gadget I need? Just curious.

Static and Static Cling aren’t AoEs, they’re debuffs that are applied to your character. 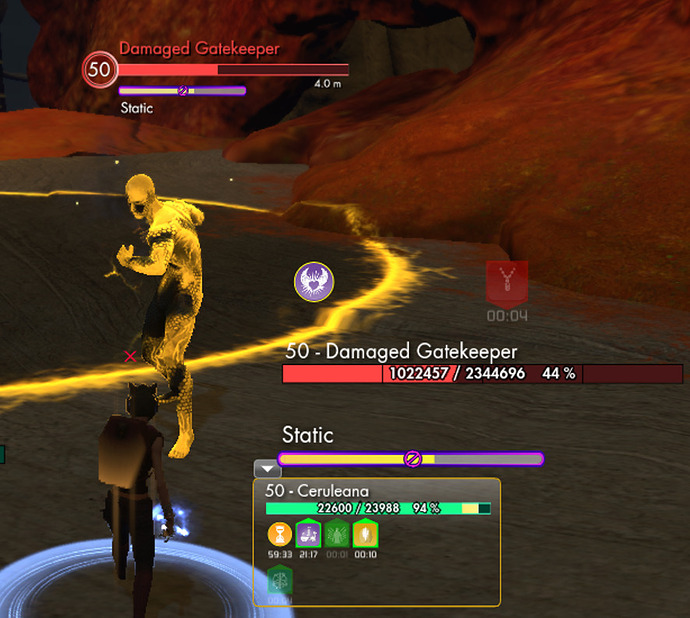 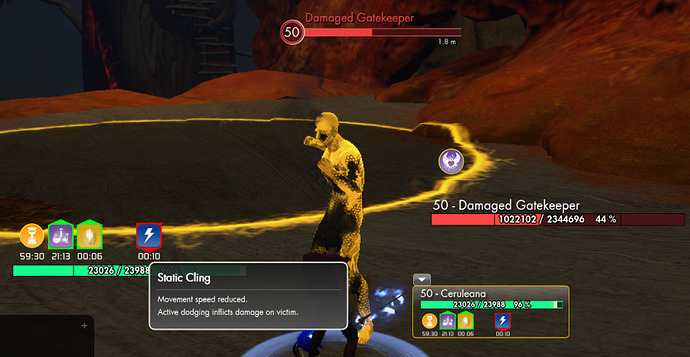 Thanks all, now I have never notice that bar ever, so now I am going to have to find out if I am just missing it, or something is not turned on (read off lol)

You’re welcome! I made sure I kept my reticle on the boss as much as possible for this one.

Another part of the same composite achievement is “Take no damage from Interfaced Auxiliary Process abilities”. What would be a good way to do that? What counts as “ability”? Just circles on the ground? Or the “attack” cast they do also has to be dodged?

it’s been a while, but isn’t that the one where you can’t take damage from his duplicates when he forks? If it is, be sure you always keep him on one end of the platform. When he forks, dodge and run to the other end (don’t try to fight while they are up). If they get close, dodge out and away from them and run back to the other side. Just be sure you have Alacrity offhand or Quickness signet. They will be slow enough that you can get away.

I’ll have to go back and check again.

(I don’t have it today, but I believe this is how it’s done.)

You need 2 modules active fork process and interlaced protocol, when GK makes 2 or 3 copies of itself. They will cast malfunctions and the like. Most effective way to get that, just run away when you see him stop and cast fork process, the adds will eventually despawn on their own, you don’t have to kill them, as long as you are not letting any of them to get close you should be ok.

Today was the “Fork Process” GK, I was fairly sure that I kept GK in corners and ran away to opposite corner when he did Fork Process cast, and visually Interfaced Auxiliary Process disappear before they could get to me to hit with auto-attack, plus I definitely ran out of any AoEs happening while there were two of them.
Still no achievement. Maybe there’s an additional trick to that?

The achievement requires the Interface module to be active on top of Fork Process. Today’s regular DA did not have that.

Now all I need to get is the Contagion achive and I am done.