apparently I can’t read. I have not heard of anything for pc version. And let me bow out of this conversation gracefully embarrassed.

Does any know if the PC-Version of DAY ONE Release will be available in the US?

Currently I can only find the Code Download version.

Hey all, sorry for the late reply. Unfortunately, it appears that there is no PC Collector’s Edition for the US as we are not releasing PC retail there. It is available for the US on PS4 and Xbox. I apologize for that.

No Retail PC version for the US. I’m going to go out on a limb and say it’s because nobody sells physical PC games anymore. On recon the only store with any PC gaming paraphernalia at all was Target.

Will the RETAIL DAY ONE EDITION Be available in Australia.

Pre-order the physical RETAIL Day One Edition and receive a print map of the Exiled Lands as well as the CONAN’S ATLANTEAN SWORD in-game item at launch. This is the iconic sword Conan wielded in many a bloody battle. The RETAIL version will be available on May 8th, 2018.

I can understand if they decided that in the age of Steam (heh) that there’s lessened demand for physical copies of PC games, but I’m willing to bet that many if not most players only want the Atlantean Sword. I suggested in another thread that they release the sword as a DLC on Steam so that the majority of the world’s PC players of Conan Exiles aren’t being left out like this. I’d be OK paying for that as long as the cost wasn’t excessive.

Go to the top of the page click on News, then top of next page contacts, then Chief Maketing Officer, maybe he can help?

I tried ordering from SPAIN - AMAZON.ES and look at what is stated on the page.

“The seller you have chosen for this product does not ship to the United States .”

Here is information on the same thread in the Support Section.

How can I order the physical PC release edition of Conan Exiles Collector’s Edition? I Live in the USA and there is no option to buy that edition. I do not have an xbox or ps4. Do I just need to wait? Thanks

This is not possible. Each key is specific to the platform, Xbox One, Playstation 4 and PC.

Here’s a summation of all the information:

Greetings Exiles, Today we have some big and very exciting news for you! LAUNCH DATE AND RETAIL PRE-ORDERS We’re very excited tell you that Conan Exiles will leave Early Access/Game Preview and launch in full on May 8th, 2018! Not only will it be…

As Christa stated above, the parts are in English. My advise is to find a site you can get the game through in Europe that does not have a region block on it. I know that the Spanish Amazon has a region block, perhaps you can try one of the others.

If you want the Sword and have the PC game you will need to buy the PC game. The sword codes are version specific.

Based on everything I have seen it is due to laws of the land in English speaking nations (most likely the U.S. where i live).

Yes, if I want to get the sword, I will need to find a site that is not region blocked so I can purchase it for the code.

Has anyone in the US had any luck finding an EU supplier that will ship to the US? I went to France - Amazon, but it will not let you pre-order. It states currently unavailable.

I bought the PC Collector’s Edition from Germany (Amazon.de link below) with no issues. Your US Amazon Prime doesn’t work for other countries and so I could not use my credit balance. However, I signed up for the 30-day free trial for Prime there and got the pre-order Twitch Prime discount from 69 Euro down to 58 Euro, I believe. And I’ll just cancel the Prime free trial.

Ahh yes. Just checked. Day One for PC is also available there for 39,98 Euro. I may be misunderstanding the discount as this says 2,00 Euro discount for Prime. And speaking of misunderstanding, let Amazon translate to English as Chrome kept having errors when attempting to translate. 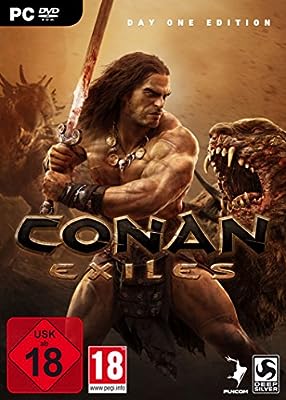 I bought the PC Collector’s Edition from Germany (Amazon.de link below) with no issues. Your US Amazon Prime doesn’t work for other countries and so I could not use my credit balance. However, I signed up for the 30-day free trial for Prime there and got the pre-order Twitch Prime discount from 69 Euro down to 58 Euro, I believe. And I’ll just cancel the Prime free trial.

Ahh yes. Just checked. Day One for PC is also available there for 39,98 Euro. I may be misunderstanding the discount as this says 2,00 Euro discount for Prime. And speaking of misunderstanding, let Amazon translate to English as Chrome kept having errors when attempting to translate.

That is good news, DeadSpine, but I can’t help still feeling annoyed at Funcom. They shouldn’t be forcing their customers to jump through hoops to buy the product they’re hoping to sell. If they want my money, they should be the ones doing the effort.

It was suggested elsewhere on this forum that the issue, at least in the US, is due to ESRB ratings preventing a physical copy of the PC game being sold. Even if correct, I don’t consider that an acceptable excuse. ESRB allows for mature and even adult rated games, and if Conan Exiles was truly beyond the pale we wouldn’t even be playing it on Steam. Funcom have had plenty of time to address any ESRB issues and plan an alternative if necessary.

Another suggestion is that it’s because PC gamers tend not to buy physical copies of games anymore, thus retailers are less inclined to want to stock them. Apart from being a very US-centric viewpoint - remember that this Day One/Collectors PC version issue effects most countries in the world - it also forgets Amazon and their ability to supply low-demand goods that would be unprofitable for many brick and mortar retailers.

But whatever the cause, it should have been obvious to Funcom that the sword would be a major draw. The suggestion of a Steam DLC as an alternative was made with plenty of time to be considered and implemented before May 8th or at least to have an official response whether it would be possible or not at a later date. And no, forum posts, even by Funcom staff, are not enough to convey such information, if for no other reason than not everybody reads forums. Again, you shouldn’t be making the customer do the work for you. This would be something that should be in an official announcement posted via the game’s Steam page.

I don’t think just giving PC early access players the sword in addition to the armor is a viable answer, because that’s then unfair to console players. A Steam DLC for the sword would be a simple and reasonable response, and they could even make it available for a limited duration to mimic the day one nature of the physical retail copies. While I’d be disappointed, I’d even accept a simple rejection of the idea by Funcom. As it is, PC players who want the sword are left to gamble whether or not a Steam DLC might be made available in the future, or to resign themselves to the extra cost and delays imposed by having to go to Amazon.de or other overseas retailers willing to ship to their country.