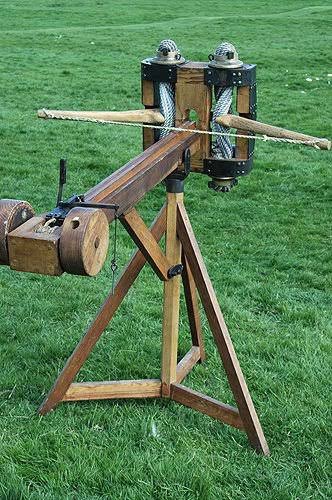 Can you imagine how fun it would be sniping enemies with this thing?

Those pesky hyenas cackling across from your walls; Thunk. Impaled.

Some scrub ready to bomb the **** out of your wall? Thunk. Impaled.

A purge boss having a slap fight with your thralls? Thunk. Impa… no, just angry. Reload!

Attach them to Crenelated wall pieces, have them build in stages similarly to Trebechets (so they cant be abused in field PvP and against world bosses as easily) slap 1000HP on the finished weapon and your good to go. Add a smallish radius around it that prevents building another too close.
Scorpio bolts crafted at a Carpentry bench (can be used as an improvised javilen?). Make them stack to ten with a hefty weight and limit the Scorpio’s inventory slot to 1 so we need a chest to resupply from, providing a brief halt to continuous fire.

Then we come to damage and reloading between shots. 3 seconds sounds like a good reload time to me. 30 seconds to send a stack of bolts.
As for damage, I’m thinking 150 to a player, with 30% armour penetration. Double damage on a headshots. Not enough to 1 tap body at 0 vitality, but definitely enough to make someone dirty their loincloth. Skilled usage is rewarded.

Did the Romans invent those?

I believe they did yes. This design, definitely.

Love it.
Let thrall archers use them too.

That would definitely get complaints from the PvP community

. But I like it. Archers could be more useful.

Alternatively, they’re actually shooting range should be raised from 30 to 50 metres. Right now they can see an enemy from 50, but cant shoot and end up spacing out.

Everything will get complaints from the pvp community, so…

They complain about defenses being weak against offline raiding, don’t they? Well, this is one of many ways to make defenses more effective.

Yeah would be nice and fyi that Scorpio is not correct those back then took a magazine and could fire as fast as the person could keep the mag filled which was difficult but on average took a 15 I think and took a three man crew with 2 in reserve in case of injury or death of current operators go hurt. One fires and aims one loads and another to hear and direct orders for their position area of attack fro the co

Maybe just limit it to 1 every like 8-10 blocks, as a way to kind of balance it… right now archer thralls are more or less useless, have a good line of defense with them? They get sniped into the ground before siege, have not enough? They get ignored all together

I’d like to see NPCs use siege weapons as part of their attack. A Siege engine like the Scorpio would be useful, not just for base defenders, but base attackers, too.

Let Purges use: Trebuchets, Catapults, Mangonels, Battering Rams, Siege Towers, Ballista, Scoripo, Sabuca, Ladders, and so forth. And alternative ammunition – we have rock boulders and explosive ammo, let us also load trebs with gas bombs (its not as effective as launching a diseased cow, but its basically the same idea).

I would love that too, @Bodin !

Let the age of conquest begin!

Im hoping with sorcery we could get some base defensives as well, like maybe a generator item of some sort that requires some type of fuel to top a lighting storm over your base, or one to cover it in gas. Maybe limit to those as one of either or, or maybe living statues that turn on when the base is attacked, but that might fall into not lore friendly im not sure here, i know this type of stuff was in AoC, for the static npcs in some quests