Dressing room issues as well as Kiss of The Revenant

I own several items on my characters that show as owned, but are not wearable. I have several missing pieces of clothing that don’t even show I own them anymore. It took two weeks to get Gm Umborls to answer my petition he fixed one outfit on one character after I gave him a full list of six suffering the same issues. He then told me there was no record of me owning these items or he fixed what he could. He also told me missing Kiss of The Revenant weapons were not in game, yet my main has two of them, he told me to get a new key, I bought a new key only to find out that it was a limited time thing. If my main owns two of them and they work then they are still coded in the game why can’t they fix this issue? Funcom sold this as pack on steam as ARG or you got a key through Funcom. Did Funcom sell this game to someone else? He tells me it might just be a bad legacy clothing transfer from TSW to SWL, yet gives me no information on how to fix it. His answer is to “repurchase missing items”. So pay twice for the same content, that’s not happening. Somone has to be higher the GM Umborls, I need to speak to that supervisor as the answers I’m getting are not acceptable. When you look at your owned items and they show yellow, but are unwearable is anyone else having this issue or you are simply missing gear or clothing?

Revenant weapons were only ever able to be claimed once per type. Meaning if you claimed e.g. the blade on one character, that blade was no longer available to be claimed on another one. They were also available long before weapon skins were added to the dressing room, so you may have used them as fusion fodder before that.

The Kiss of the Revenant pack has also been unavailable for purchase for years, so I don’t know whom you paid for another key?

As far as clothing goes, all of it is gender-specific, some of it is faction-specific. And cosmetics earned in SWL are not account wide.

Hope that answers at least some of your questions.

Let me show you. 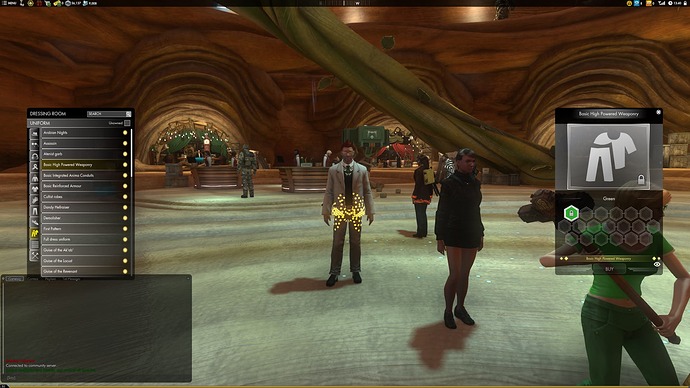 Here’s a different character with the same problem. 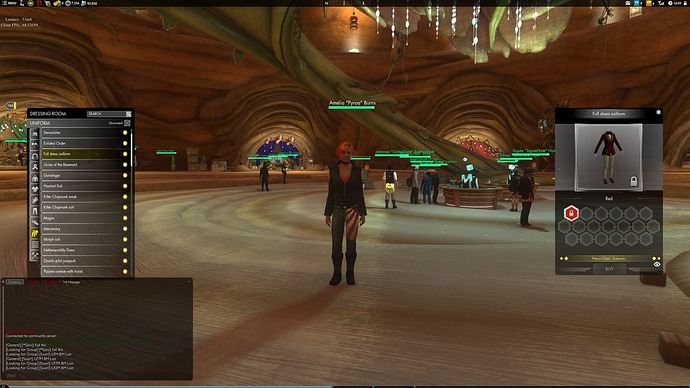 I could do them all, but what’s the point it’s broken and not fixable according to GM Umborls and this doesn’t even take into account the items that disappeared like my mains drop illuminati earrings…

I never used any of the revenant weapons as fodder they are simply unique. I don’t know of any other summoning weapons. The difference with the two I have is they were equipped when TSW went to SWL and the others we’re banked. They simply ceased to exist.

What cosmetics precisely are you missing?

Your second screenshot (with ‘Pyraa’, whom I assume is a Templar?) suggests that the Full dress uniform might be similarly confused. You may have transferred a different Faction’s Full Dress Uniform - which would be hidden to your Templar character since you really shouldn’t be wearing another Faction’s dress uniforms. Do you recall which Full Dress Uniforms you had from TSW, and for which genders you had each one?

Each Shadow-Bound Weapon can only be claimed once per account via the /delivereditems window. Did you check this window at all for your other weapons that you never used?

The Shadow-Bound Weapons were also contained in the ‘Kiss of the Revenant Reward Pack’, a Steam DLC one could purchase for Secret World Legends. This DLC was only available bundled within the ‘Expanded Universe Bundle’; the Expanded Universe Bundle is no longer available on Steam as it was taken down when Hide and Shriek became Free To Play. As a result, the Kiss of the Revenant Reward Pack cannot be purchased at this time.

I hope this helps!

Okay I found the Illuminati earrings. That was my mistake.

Here is the current list of owned, but not operational outfits.

As too the weapons question. When TSW became SWL all equipped items I had on or in my bags transferred with the characters. My cabal bank was wiped clean as was my regular bank where I had the Kiss of revenant weapons stored, but at the time I was using the hammer and shotgun and they stayed, I just lost all the others. I have no idea why my gear transferred and no I don’t want it fixed as the have been tiered up with aurum since they started as tier II. So I’m confused as to why you can’t simply reimburse them since they are still in game and functional.

It seems as though the most likely issue with your ‘locked’ cosmetics is that you actually own them for a different Faction - in this case, it’s likely you own them for the Illuminati. Your Dragon and Templar characters cannot see those uniforms through the default Dressing Room because they aren’t qualified to wear them - they’re the wrong Faction. So what you’re seeing is that you own Faction color for a different Faction. You cannot wear an Illuminati uniform as an agent of the Templars or the Dragon.

Luckily, the Full dress uniforms and Basic High Powered Weaponry/Reinforced Armour/Integrated Anima Conduits all drop from Patron Chest Vanity Reward Bags. You’re able to earn the right ones for your Factions on those characters!

Regarding the Shadow-Bound Weapons, those did not exist in The Secret World (TSW). Regardless, Weapon Skins didn’t transfer through the Legacy or Vanity Transfers due to how Weapon Skins function in TSW. Not only that, but neither your characters nor their inventories (clothing/pet/sprint inventories aside if you want to count those at all) did not transfer to Secret World Legends (SWL). Your characters or their gear cannot have transferred, because that isn’t even remotely possible.

Have you checked your Delivered Items by using the chat command /delivereditems to see if any of your Shadow-Bound Weapons are there unclaimed? It’s also possible you could have accidentally sold your weapons to a vendor or consumed your other Shadow-Bound Weapons for Empowerment prior to the change that allowed you to learn Weapon Skins from any weapons you used for Empowerment? Before that point, you still had to equip it first to learn its skin.

Listen all these characters existed before SWL and I earned the gear they show. However it is locked I had 3 50’s prior to SWL. I now have three so if your saying I earned them on different characters and it somehow bugged, then I have no idea how you are coming up with that. Okay so if it’s not possible and it couldn’t have happened how do I have my existing hammer and shotgun I was upset about the SWL change and took over a year off. So here if kiss of the revenant couldn’t transfer and I had already claimed them through ARG on TSW, please explain these screen shots… 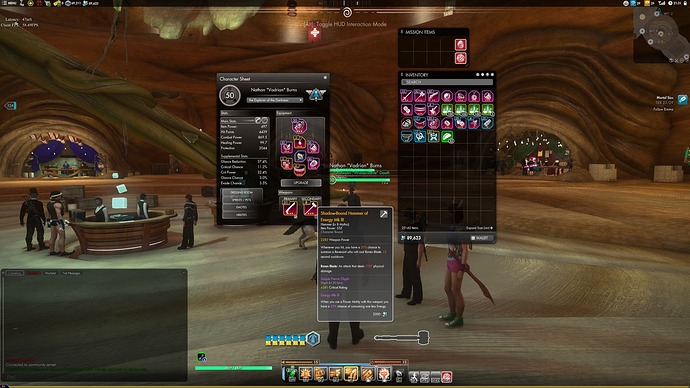 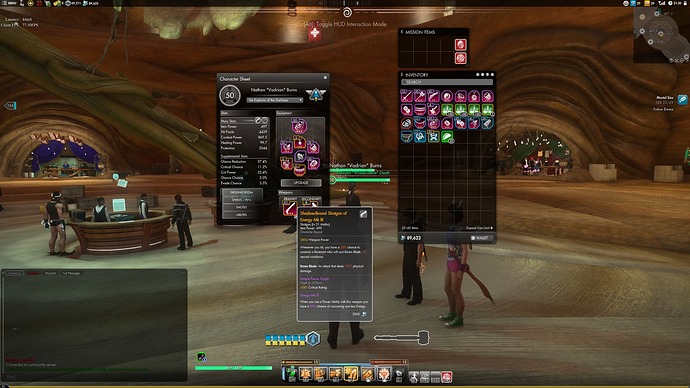 I need this issue fixed, not a debate on what "might " have happened or what you believe is the truth. There are always three truths in every argument. Yours, mine, and the plain truth. People ask me all the time how I still have a couple Shadowbound weapons. Now why would they ask that, if they aren’t available in SWL. I just showed you they are in existence as evidenced by my screenshots. All I know for a fact is that I was on TSW the day it came up became a lifetime patron the moment it became available. All I want or need is a fix for my current issues. I mean for god’s sake I had wing’s on three characters and max faction the others weren’t as advanced or I didnt pvp with them. That’s why they only need full dress uniforms. I had a maxed Illuminati, Dragon, and Templar. All male. All max faction. I wouldn’t even be able to see the items if they weren’t owned by my characters, so since they are owned how am I supposed to get them again from a patron chest when you get the item it removes it from circulation so you don’t get duplicates except for colors.

I’m trying to help! I think there’s some misunderstanding here in terms of timeline and which game some of this occurred on, as TSW didn’t have Levels 1-50.

As for your other cosmetics, if you truly had the Full dress uniform on all genders and factions in TSW that didn’t successfully transfer, you’ll need to log into TSW (if you have it installed) and check your Dressing Rooms on TSW to confirm whether they were actually owned by the TSW characters at the time of your Legacy or Vanity Transfer. Having the option to claim them from the Item Store doesn’t count as having learned them.

As the Vanity Transfer transferred all learned cosmetics and applied them effectively account-wide to any character of yours in Secret World Legends on whom you successfully claimed the TSW Vanity through the Delivered Items window, you can have a male character who has female cosmetics learnt or a Templar with Illuminati cosmetics and et cetera. The Dressing Room normally doesn’t show these to you, and things like the Faction Uniforms are Faction-locked regardless.

If you want to actually see this fact in Secret World Legends itself, please do one of the following:

It’s late I will pick this up tomorrow and try your way. All I know is if a GM can fix one character then they can fix them all, if they are so inclined. I was told he fixed the issue on all characters, but it only worked on one and he said that was a success. 1/6 is not a success. More tomorrow.

I used Elga’s and I can see all three suits on my characters. Not just illuminati. Please let this thread die as I have decided to leave the game. Thank you for the effort you put in to help.