Easy to get, decent weapons

At certain levels, sometimes it can be hard to find a decent, easy to get and cheap weapon. This however, is a guide for exactly that. These weapons can be obtained by players on a paid account and also players on a free account.

From any fair trade store you can buy weapons known as the 000 weapons ranging from quality level 1 - 300. These weapons can be found in the weapons terminal located near the implants sign (shown below) When they were first introduced, they were upgradable 4 times, however it has since been made easier and Fair Trade stores sell them in their 2nd last upgraded state. (3/4)

The last upgrade will increase the minimum and max damage on your weapon, more on that below. These weapons can be great for froob players for almost every profession at one point or another (I’m using the 000 shotguns on my lvl 60 trader and my lvl 100 trader) 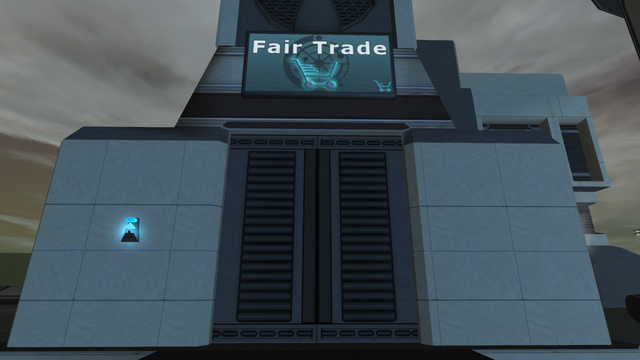 Every weapon type is sold except Heavy Weapons and Sharp Objects and with the exception of Martial Arts and Melee Energy, there is usually 3 or more versions for each weapon type (eg 4 types of pistols sold, 4 types of assault rifles sold) however they all have the same damage stats.

1 version of the weapons will have some sort of modifier, for example one of the rifle versions sold is called MTI SL70 and has a dodge ranged modifier but the other rifles sold do not. Other differences include a small chance to stun an opponent when you hit them (Blackjohn 2hb, Gluegun Rifle) so shift+left click on the weapon and have a look out for modifiers or specials like stun. 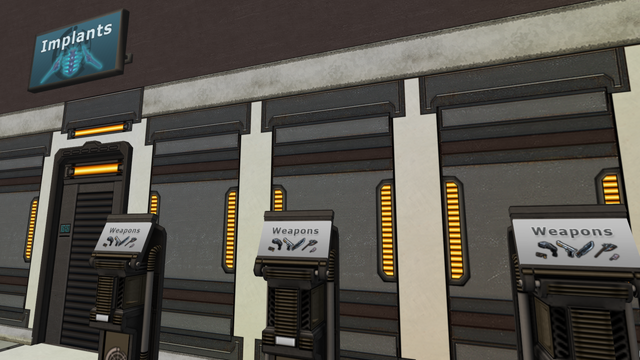 To upgrade your weapon to it’s final state, go the tradeskill department of any Fair Trade store (through the door on the left after entering the store) and open the weapon supplies terminal. (located against the back wall you face as you enter)

For any ranged weapons, buy a Ranged Weapons Adjustment Kit (Upgrade kits must be at least 90% of the ql of the weapon you want to upgrade) and combine the adjustment kit with your weapon. Hold shift and push t to open the tradeskill window. The process is the same for any melee weapons, however you must buy a Melee Weapons Adjustment Kit. Example shown below. 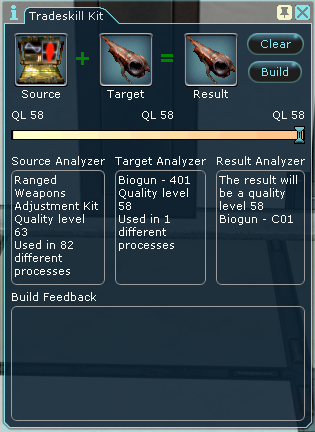 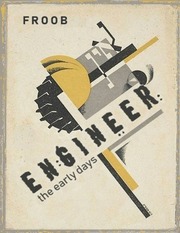 Higain, Knave is right there froob MA are very easy to play and don’t need any weapons their fist hit the hardest and free very good froob choice and very easy on the creds.

the best froob weapons are nodrops and unique weapons if you can get them. Melee has a lot to choose from. any weapons you get from instances (totw, steps of madness, subway ofab weapons, foremans guns) are generally worth using for a long time.

I do, actually. Username Insaneevan.

Any preferences for armor while leveling? Or did you simply mix and match and not worry too much about it? Or maybe lots of Rhinoman armor for instance, or some of the nomad/halloween pieces when available?

Newcomers armor now lvls up to ql 200 and so does Living Cyber Armor from the subway. The helmet is a very nice froob helmet for a long time.

Later on you will mix and match a bit depending on your profession and what you find. Some of the nomad and halloween pieces are nice.

either use newcomer or periodically change out carbonum every ~30 levels. the former is easier, and still pretty good, but the latter is more effective protection. mix and match miy’s pieces, rhinoman, uniques, halloween and anniversary armor as you see fit.

These weapons are great for froobs

you should link one in your ‘weapon advertisement’. I have never used a 000 weapon. My lvl 60 trader is using Dog of War - easy to get, fr00b friendly pistol. My lvl 200 trader is using 2 dogs of war.

They aren’t the best, but for new players they’re a good option.

Pretty much. It was very haphazard, to be honest. Past 150 I blitzed missions for Miy’s and built up a good couple of sets in various QLs and types.

As Jack states, they aren’t necessarily the best weapons, but they are generally fast weapons (compared to other RK non-‘special’ weapons), which (for me at least) makes for much more enjoyable experience at lower levels.

For some professions there is a clear progression through these ‘special’ weapons (the classic being 2he enf: starter, illegal ofab, Energy Scythe, Frost Scythe, Aztur’s sword, Panther, Pained Panther.), but for those, like shotgun traders, who don’t have this, the 000 weapons provide a good selection of “filler” choices.

Couldn’t have said it better myself

Note that froob traders aren’t restricted to shotgun. Although it is a light blue skill, traders actually don’t have a dedicated shotgun buff; wrangles buff every weapon skill, making traders proficient with any weapon type.
(As well as making pistol a hard to beat option for a froob trader.)

I agree on the ‘000 weapons’ being good for filling in the gaps between no-drop weapons, especially for a new player. Adequate damage, easy to acquire.

Illicit OFAB weapons from the subway are ridiculously OP for their level and will last you well until lvl50. Use them, since you level fast in the early game this will save you having to look for upgrades every hour of game time.

At about lvl50, time to upgrade

My main is a froob Trader wielding shotguns. I’ve seen a few posts about those already so I’ll chime in with the ‘classic’ shotties:

It is insanely fun

Very unpredictable damage output, but pulling out 4 crits in a row for ludicrous damage is hilarious! I can elaborate on each setup if there is interest.

All those shotties are rollable, so is the crit scope after ql100 i think (but you’ll probably want to buy a high ql one).

Good point @Repopulation, I tried to allude to it in my post, but worth the outright statement. Traders are a bit of an oddball in that respect.

For other profs, where the options are more limited, the 000 weapons actually facilitate diversity, by providing the option to stick with a single weapon type over a career, rather than having to IP Reset from the main supported weapon type when the one you want becomes available (e.g. ranged energy soldier for Skawts), or just “soldier on” through a gap in a options (thinking 1hb enfo between TOTW and IS skulls).

That’s a shame, but yeah it’s not for everyone. Although I’d add if you can get your hands on some high crit mod items and get crit buffs from an MA, you can get your crit % close to or even above 30 and this is where the fun begins

Add plenty of AAO to increase your chances further.

Edit: and if you’re reeeeeeeally fortunate, the ELLTS is +15% crit instead of +9 for the scope.

Thanks alot @Coredris, now I have to roll another Alt!