Something is not right here.

I haven’t noticed this with my Cimmerian Entertainers. I did notice that the armor that you can craft after killing the Abyssal Remnant seemed to add a brief instance of corruption when equipping it. It didn’t last though. All in all less than 1 second.

Maybe its just for the Lemurians, but its definitely continuous. I left my base, traveled across the map, came back and it was still doing it. Must be a bug somewhere.

2nd EDIT: After placing Luba (T4 Entertainer), she only gives the Entertained buff. No corruption debuff from her. The corruption issue must be from some ‘sick’ Lemurians.

To be honest, I only had 1 Cimmerian Entertainer. She was a T1. When I walked by my wheel of pain that was breaking a T3 Cimmerian Entertainer I got a split second of corruption like with the armor. It stopped almost immediately. Now the T3 is out and I am still not gaining corruption. I just put a T2 in the wheel so we shall see if that one gives corruption or not soon. I have yet to test Lianeele. She rarely seems to spawn anymore. Except in purges.

EDIT: The T2 Cimmerian did not cause corruption.

I can confirm that this issue has been reported and should be logged for fixing.

I do not know if this will help Funcom solve the issue by it looks to me like the Dancer corruption my be tied to specific spots on the map. 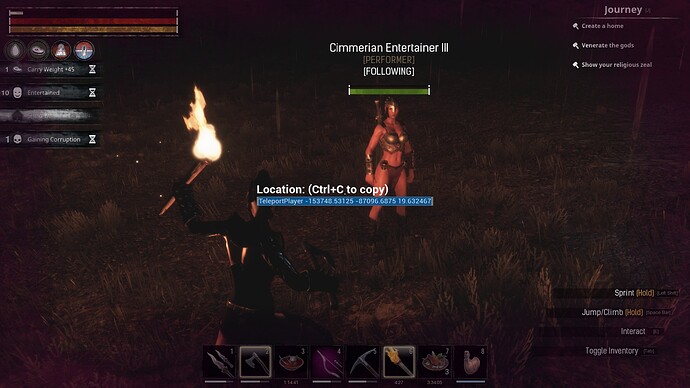 As long as I stood on this spot I was getting corruption. Yet corruption did not occur if I moved even a little bit from the corrupted spot.

Well, dancer thralls that increase corruption was a suggestion recently to accommodate the sorcery system, but yeah, they do kind of need some consistency. Something like dancer type x always increases corruption or dancers wearing (insert outfit) or doing this particular dance or under these specific controllable conditions or whatever.

I do not know if this will help Funcom solve the issue by it looks to me like the Dancer corruption my be tied to specific spots on the map.

That’s a good thought, but it doesn’t seem to be the case in what I’m experiencing. There was no corruption there where I built my base (near Sinner’s Refuge, just up the hill a little bit). Placed the thrall and then there was corruption.

Well, dancer thralls that increase corruption was a suggestion recently to accommodate the sorcery system, but yeah, they do kind of need some consistency. 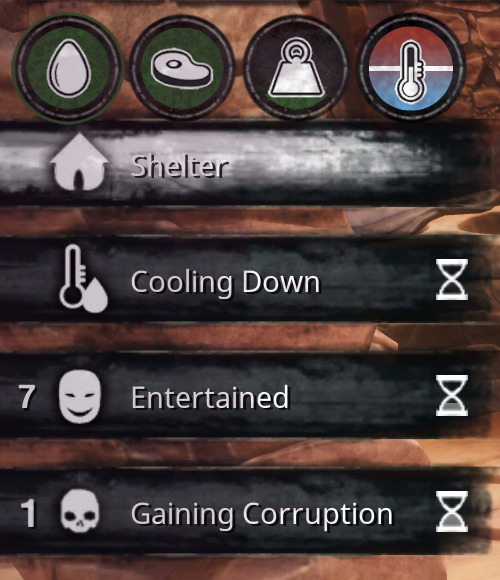 I’m getting the same thing and at first I thought I built on something. The dancer also isn’t dancing consistently but heck, she looks hella cute.

I’ve also seen the fraction of a second corruption when changing my helmet to wear the sandstorm mask and vice versa. I was with a dancer, however.

Update: Logging out and logging back in seems to have stopped the entertainer from causing corruption.

Yeah this is on my list also. A weird one to be sure.

I had this happen as well, I broke a T1 dancer and placed her into my base then the corruption started. Did the same log of and back on but was still getting it. So no clue what is going on with this. =/

I always thought it was intentional.

When you are just starting the game and you see a “friendly” entertainer for the first time, you may not know what it is for… But suddenly you get the information: “Journey step completed - Cleanse corruption by watching an entertainer”.

The new player may encounter an entertainer before receives corruption, so the entertainers periodically spread 1 corruption point to activate the Journey step. This is a tutorial so you know what to do when you get corrupted.

Note: Hope I didn’t mess up too much, I’m so tired right now.

I had this happening for long.
Dancers apply a little corruption (that you can’t even see in the bar) and then remove it.
So, this pre dates 3.0
I never filed a bug report because it was so little that I couldn’t even see it and then was removed. Just a small nuisance. I don’t know if this is what you guys are experiencing…
Maybe I should have said something sooner.

That may be, but it’s a pretty silly solution, if so. Especially since getting corruption has a full-screen visual effect, which continually pops up when near a Dancer.

similar @Mikey . But from my point of view using entertainers to reduce corruption is silly (inappropriate), they themselves said that they were considering changing this - a special ritual was to get rid of corruption (or just corrupt perks

). But it turned out to be even more complicated and troublesome for players.

In general, I think they will change that someday, but now they have to make in-game prompts and hints.

put it another way: corruption was an unfinished element of the game, and getting rid of it was also an unfinished (from the sorcery idea).

Sure. Corruption is now (with Sorcery) not unequivocally a bad thing, so entertainers removing it is possibly not what you want, anyway. Disclaimer: I haven’t progressed in Sorcery yet, only found the starting place last night, so maybe I’m talking outta my ass

It’s only really an issue if you want to do sorcery, but don’t want to corrupt your stats. Otherwise, if you corrupt your attributes enough, dancers won’t be able to cleanse it so it becomes a non-issue.

Annnnnd this bug finally hit me too.