Equip rope and torch in both hands

hello, surely this topic if you have already talked about it, could you insert in some future update the possibility of being able to equip the torch and the rope in the right hand? also because when I have some tied slave I often come back at night.

In my opinion rope of the dead should emit light

Until anything gets changed: use the 1h legendary axe: Glimmermoon. It emits light

Moving topic to the suggestions board.

It’s a pretty weak light source, but it’s better than nothing - and it’s a pretty good weapon, too.

Exactly the problem with any suggestions implying the use of a Legendary weapon : you must be lucky.

I have glimmermoon ~10times now… when I farm legendary chest, I get at least 1/week. (Yesterday I got one).
But then again I also have >6 BoA… And only 1 Baalpteors Razer…

I <3 my Glimmermoons! Not only do they shed light and have good damage, but they’re also lightweight — have one in every loadout as my primary weapon.

Thankfully I’ve had a bit better RNG with BP’s weaponry and have been known to carry BP’s Lodestone and Razor since they weigh nothing. Lodestone is great for sundering enemies for my follower to chop up, and Razor is perfect for dispatching KO’d thralls via the new overhand chop. It’s also handy for when you accidentally harvest 1 stone too many.

Anyway, WRT the OP, another trick is to equip your follower with Forgelight or the Jedias Greatsabre and then fill their inventory so they can’t sheathe it.

As for solving the handedness problem, one solution Funcom could look at would be to single-press a quick slot to equip an item in the primary hand (or both for 2-handers), versus a long-press of a hotkey to equip it in the other hand. (This could allow for some interesting dual wielding combos even.)

Another approach would be to allow us to stack 2 items into the same hotbar slot so that they are equipped jointly. i.e. Sword & Shield, Torch & Rope, 1-H Axe & Throwing Axe, etc. In this way, both could be equipped with a single button press — a mechanic I’ve seen employed in several other RPGs and action games.

By Com yes! Long have I longed to hold a torch or a rope in my right hand! I just cannot seem to do it… I thought I was cursed, but if others struggle with the same malady perhaps the problem is worse than I feared.

I know exactly what you mean Kapoteeni. I have now been trying to find one since @Larathiel first told me about it through her catchy Simon & Garfunkel jingle. But still no luck as of yet, and still running off cliffs and plummeting to my death while towing thralls at night.

So here’s my quick n’ easy method for getting the legendaries I want:

I can take some screenshots of effective enclosures on my server if you like.

This week alone I got 2 Glimmermoons

I am haunted by it!!

Every 15 minutes, smite RNGesus until you get what you want!

Every 30 minutes, because the chest needs 30 mins

Or you have way to much keys…

You could also create a pair of gloves that light up

I have used a thrall to carry a torch for me many times, it’s just unfortunate when he breaks on some ones head

or you forget to give him back his weapon

I don’t know if a lantern would fit in to the Conan world?

I do use it a lot for the bat caves, it’s a good weapon

So that’s why I can’t seem to get rid of all these darn keys!

But yeah, I was thinking use a pit to kill the same boss every 15, load up on keys, then go spend. You’re right about the respawn timer for a single chest though. (And yes, I do amass keys faster than I remember to spend them. Thankfully, chests sometimes poof for no good reason to help diminish the surplus key-pulation…)

None. It was an idea to have one

I can take some screenshots of effective enclosures on my server if you like.

I must admit that as a diehard Crom loyalist, I tend to prefer killing World Bosses myself in single combat. However, I will take a peek at some of your enclosures for if ever I reach the end of my tether and decide to hasten the whole process. Thanks Larathiel.

@Croms_Faithful So this kill pit is not mine, but belongs to @OVRZLS, a friend on the server I play on. As you can see, their kill pit is far enough from the Scorpion King’s spawn that it doesn’t despawn the boss, and it’s wider at the opening closest to the boss so that the front archers don’t block the shots of those further back. (Incidentally, this is why we always use wedges for the archers to stand on rather than square ceilings — less floor to potentially block shots.) 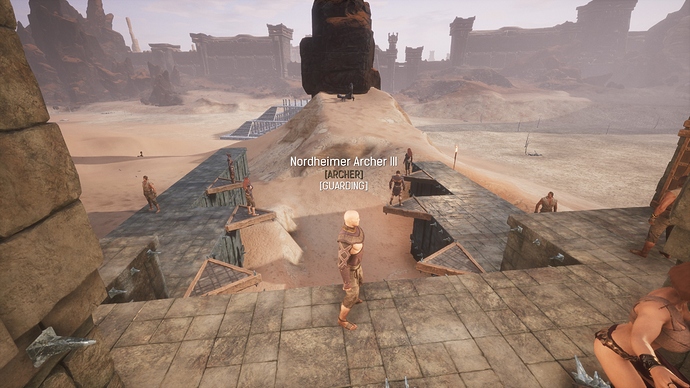 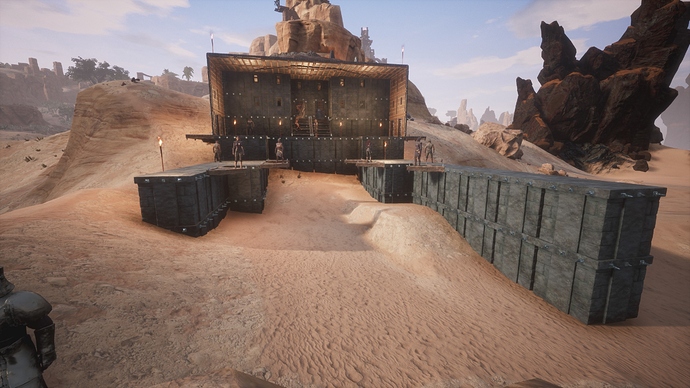 As you can see here, you only need to make the walls high enough so that the boss’ attacks cannot hit the defenders. At this height, the scorpion’s attacks completely miss no matter what combo it performs. Now, were this a kill pit for a Rotbranch or a Rocknose, it would need to be significantly taller as their attacks can hit much higher. 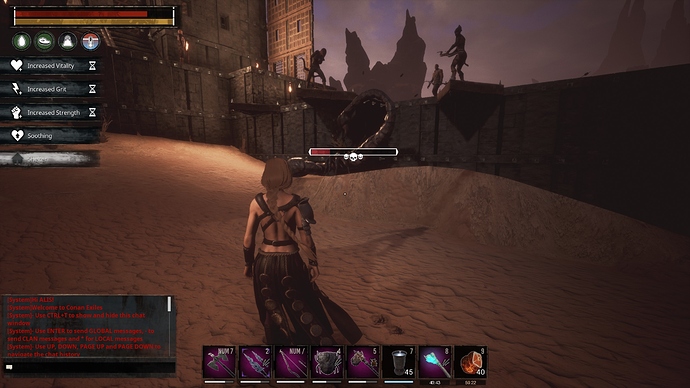 Other things that are nice to include are leaving enough space so that others can run past, including a well, some internal rooms for storage and sandstorm shelter, a dancer to remove post-teleport corruption, and a maproom! 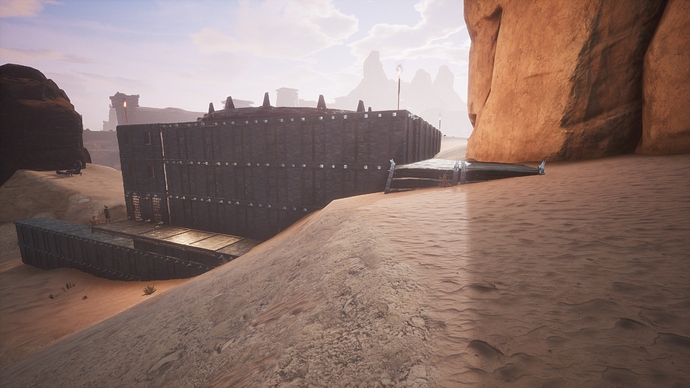 When selecting archers, you’ll want to go for the highest DPS archers you can find, and give them the highest damage bows you can make with the best damage fittings. My personal favorite is Dragonbone Bows with an Advanced Damage Fitting. (In my tests, melee thralls see faster kill times vs humans with Spiked fittings, and versus monsters/animals with Damage fittings. However there’s also the bug where Armor Pen seemingly doesn’t work at all on bows, so it’s damage fittings regardless where archers are concerned.)

If you like, I can also post screenshots of my croc-killer pit later on, but the King Scorpion east of Sepermeru is among the most convenient to farm given how close it is to an obelisk.