Please provide a step-by-step process of how the bug can be reproduced. The more details you provide us with the easier it will be for us to find and fix the bug:
1.Log on
2. Play for a min or two
3.Crashes. Log back in and it could be a minute or 20 mins but it will crash
4. The Crazy thing is I have no Idea when. Some days it works fine. Other days it crashes every 2 minutes

I hjad another forum post and this was the last entry in it. then it closed.
IgnasisCommunity Support

Welcome to our community.
If you’re fairly certain this crashing issue is not related to mods, please make sure to send the crash report through the game’s tool with some information to our team can fetch it and be able to look into it.
Thanks and apologies for the frustration.

PLEASE somebody from the game help me

Not sure I can really help, butr there are some base line things you can add to your report that may help:

Computer specs -
CPU
RAM amount
Video Card
Are you playing from a Hard Drive, or an SSD?
It looks like you are playing online? Can you post the MOD list for the server you are on?
Does this happen in Single Player? Or only Online?

I’m assuming you have restarted your computer and it still happens.

Now, Like I said, I may not be able to help, but providing this information can help generate a better picture of your situation. Only having 8GB of RAM, and you will undoubtedly have some issues. Playing from a Hard Drive instead of an SSD will give you performance issues as well. Old video card may crash things, especially if you haven’t updated drivers in a while. (Speaking of which, have you updated all your drivers lately?)

Another thing that can happen, is if you use an AMD Processor, and swap to another window while in game. If so, I recommend that you do a google search for ‘AMD Processor Conan Exiles Crash fix’ and follow the instructions you find there. It should just be a small ini file edit to fix that, if that is your case.

Good luck, and hope this works out for you.

Computer specs -
CPU (AMD Ryzen 7 1800X Eight-Core 3.80 GHz)
RAM amount (16.0 GB)
Video Card (NVIDIA GeForce GTX 1070)
Are you playing from a Hard Drive, or an SSD? (Hard Drive)
It looks like you are playing online? Can you post the MOD list for the server you are on? (Zero Mods)
Does this happen in Single Player? Or only Online? (Both)

I have updated my video cards drivers

I have updated my video cards drivers

I’m not sure if you found this one yet, but if you run Conan on an AMD processor, Follow these steps:

Go to your \steamLibrary\steamapps\common\ConanExiles\Conansandbox\saved\config\WindowsNoEditor folder.
Find the Engine.ini file and place the following line at the end of the file:
[/script/engine.audioosettings]
bDisableMasterEQ=True

This will stop Conan from Crashing if you ALT+TAB, or the game screen loses focus.

Also to note, that is has to do with audio. This is not the only issue we’ve had with Conan Audio and it messing with the game. There was a point where Combat SFX would not play and cause freakish lag that often times found you halfway dead, or all the way dead before the game caught up to displaying what was going on while your game was frozen. So updating your Audio Drivers may not seem like a thing, but it totally could be!

Sounds like your system is pretty decent, other than running the game off a HDD instead of an SSD. I’m not sure what else to tell you, but I hope something here can help.

There is no WindowsNoEditor folder. in the config folder. 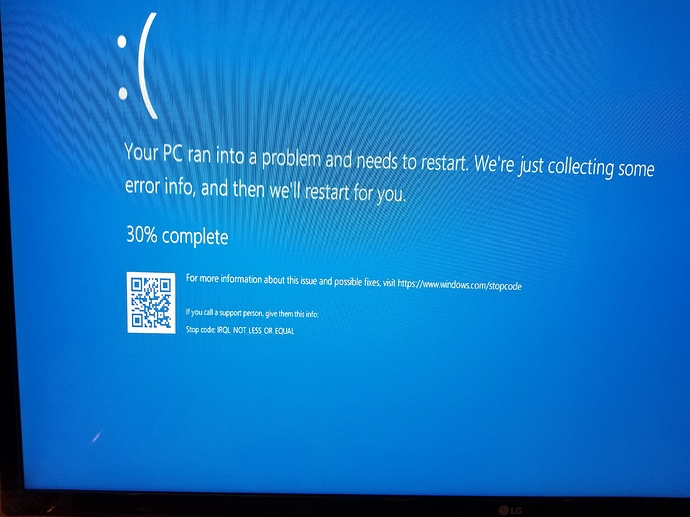 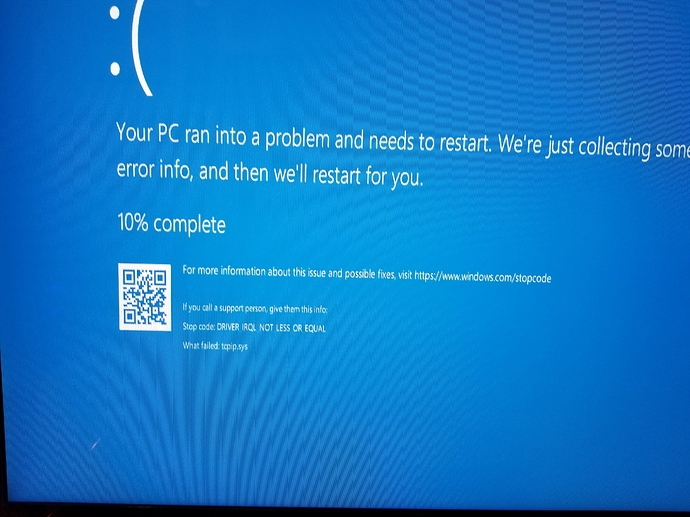 also with in 15 mins of each other the computer shut down and gave me these messages while playing the game. This is the ONLY game that crash’s I play around 20 different games . including some on Steam. BUT Conan is the one that Screws up

So your COMPUTER crashes? I was thinking it was just Conan sending you to the desktop. Or is this something new?

And you don’t have this folder at all? 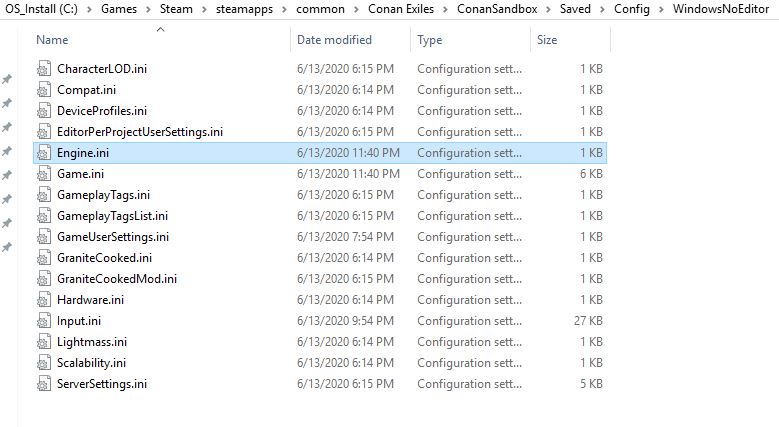 Another step is to Reverify your files through steam, and I assume you’ve already reinstalled?

Was going to ask if you were getting logs for the crashes, but those bluescreens were actually mega informative.

DRIVER_IRQL_NOT_LESS_OR_EQUAL is often caused from the following:

Your one shot offered the failed file as tcpip.sys. Outside of running a full scan of your antivirus to make sure it isn’t malware, tcpip.sys generally refers to your TCP/IP driver as malfunctioning. You can try to reset it or check and see if that particular software needs a driver update, as well as checking to see if something with Conan Exiles is triggering your antivirus program to error out if it offers web browsing protection (a strange connection, but I’ve seen weirder things happen, and honestly if you’re not experiencing this issue with anything else the most likely culprit out of everything).

I recommend checking out these two articles I found, of which I’ve quoted some of their words in this post:

The Bluescreen Error Itself

How to Check Your TCP/IP Drivers