Grrr The Legbiter: Thralls not in the game and those with nasty spawn rates

[Describe the bug here]i’ve spent almost a week straight farming the spawn location for Grrr the Legbiter. I just got two other named thralls from his spot last night. is it unreasonable to expect to get a thrall in under a week of playing a spot?

Grr The Legbiter is working correctly. Grr’s spawn rate is on par with any other Tier 4 Thrall on the map, and has multiple spawn points (pretty much any exile bonfire/camp with 3 Thralls at it). Just bad luck I’m afraid.

He does spawn. Hes just very rare because all the spawns hes at are shared with between 15 - 20 other exile crafters. So while he has the same rate, hes competing with all the others.

yeah, In one game I got myself 4 Melicoma the Watchers after a week of farming the Exile Camps in the river. Zero Legbiters.

Sounds like the RNG is not favoring you. Took me 2 weeks to get first Daya Leaddrinker out of Sep RNG hated me as well. RNG = Random number generator for those not familiar with the term.

This sounds like you’re only scouting 1 spot for him. (Camp 24 I’d bet) Grrr actually spawns at a bunch of the unnamed exiles camps now. Just keep walking up and down the south shore of the noob river and you’ll eventually find him.

Each of these locations have a lot of different thralls that can spawn, so the rng odds for him specifically can be pretty low, despite all of the multiple locations.

If you check out the thralls listed at each of these locations on the wiki, you’ll see him at most of them. They just haven’t updated his page yet…
https://conanexiles.gamepedia.com/Exiles 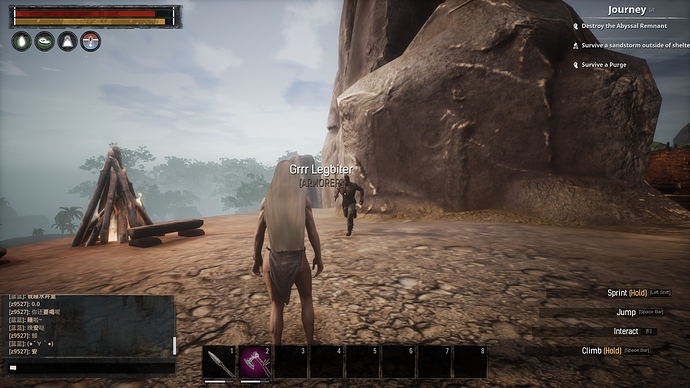 And it is official server , I got many T4 before him and got some multiple such as senk the pillow dancer , Enis Ironwrought , Ros-Crana o’ the Dells.

And I doing farm this everyday for a year. I only get 1 Grrr.

He has low spawn rate but he do can spawn. 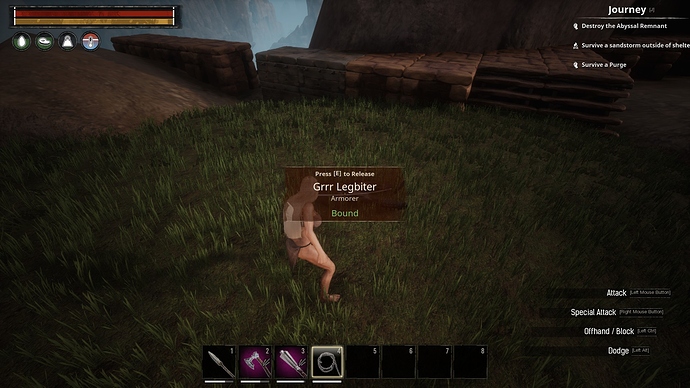 I afk camped exile camp 24 when that was the only place for him for about 6 weeks before he appeared. Sadly, i was afk for 17 minutes instead of 15. I returned to see him casually stroll into the panthers down the hill and die.
I put up a wall and waited and a week later he spawned twice in 4 hours.
As soon as he was cooked i packed up my 2 Grrr’s (and about 40 others including 10 Conall the Hammer) and i havent been back there since.

there is also a rare one called Zavek, if you want challenge. funny enough the only t4 armorer that spawn int he game (non purge one) that i am missing is chelkus the smith LOL

I have 2 of chelkus i got at camp 10 on my solo character lol.
Got Grrr there and most of the other T4 exiles too.

I’ve been getting a bunch of T4 exiles from all the camps on my new online character now, just doing laps up and down the river. Camps 5, 10, 15, 19 and 23 to be more specific. No Grrr yet with this one tho.

I’ve yet to see Zavek even once with either character. Definitely a challenge.

I got about 4 of each Chelkus and Zavek while waiting for Grrr.

there will be more thralls coming with new patches…!

I’ve been killing off so many Galacuses and Ros’Cranas that I’ve lost count. Got enough Alumit Anvilbrows to crew all my bases, and got a couple of Orqina Steeltongues to make me nice elephant trousers (most of my pirate thralls are wearing flawless elephant pants now - they’re decent armor and look good with Black Hand shirt). Annoyingly, I’ve seen Enis Ironwrought only twice and accidentally killed her both times - luckily I managed to get an Irniz of the Furnace to make me flawless Zamorian a few days ago.

No Grrr Legbiter. Such is luck.

But if bad luck was a bug I’d spend all my time sending bug reports to, I don’t know - God?

My first 2 months I didn’t see a single T4. I play for at least a few hours everyday. I hate games that use RNG for stuff like this. I lost count how many times I raided the den trying to get that blasted armorer. (my gf has been doing same for same amount of time).

I caved in and installed a mod recently that increased the chances to get t4 thralls. Now I have quite a few, but still don’t have the one I wanted at the den. Llarn Steeltoe is the fellla i am after. I always have very bad luck in RNG games…lol

Didn’t know Grr appears in several places. I build these massive stairs that lead all the way up to the exile camp 24 to farm it easily. But its so far away from any of my bases I don’t think I will ever get that dude…heh

… Aaaand complaining works. Finally managed to find, not kill, clobber, toss into a merry-go-round and tame a Grrr Legbiter.

…And now I don’t know what to do with him now that I have him. I just wanted him to complete my collection.

I never had any luck finding him at the Den either. Found one Legendary Armorer there, though. I eventually found Llarn Steeltoe at the Ruins of al-Merayah on the southern edge of the savannah. (I have a tiny outpost there for collecting T3 archers from the small Dogs camps, as well as hunting for elephant hide. So luckily I didn’t have to drag him halfway across the map.)

And now I don’t know what to do with him now that I have him. I just wanted him to complete my collection.

Well, if your playing as a female, the flawless hyperborean is a must have.
A dude… Not so much.

Seriously. The flawless hyperborean epic lets you get to the 40 str perk by only spending 31 as well as having around 700 armour. Not sure of the exact number.
Plus its cold resist. At least for now.
I mix and match it with the pict helmut and dafari top for looks and to balance temp.

Ive seen a number of threads in the past, of people who are so determined to catch this ‘Grrr Legbiter’. So what is the big deal with this guy? Does he actually have anything special or unique going for him other than being T4 and having a humorous name?

I guess it’s the sexy metal bikini he can craft. Personally, I don’t much care about the looks. I use the male version on my Taskmasters (it’s a slaver outfit, after all) using a mod to change their cosmetics, but the female version… errrm… Yeah, I can see why it’s popular.

Hes the only thrall that makes flawless hyperborean slaver.
This is the only heavy, strength, cold resist armor in game.