Purpose of the Guide:
The purpose of this guide, is to give general guidelines of the Ability Pages. While different weapons can cover different roles, they generally have the same setup. At the bottom, I look at things, which i personally take into account when choosing weapons. I realize that there is little new info for players already well into the game, but i hope it can give newcomers some pointers =).

Navigating the UI
Unless you are a Veteran from TSW, you will only have 2 weapons unlocked from the get go. Unlocking more cost MoF, starting at 5k and scaling up the more weapons you already know. 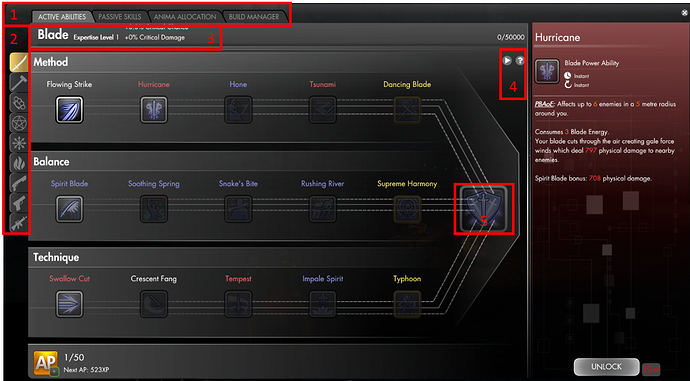 Active Abilities
Each Weapon have 2 Basic (white), 4 Power (red), 3 Elite (yellow) and 6 Special (blue) Abilities.
The Basic abilities come as a ST, and a non-target (AoE/auto-target).
Powers come as 2 AoEs and 2 ST, with an 3Energy and 5Energy of each.
The first row of Abilities start with a ST Basic, followed by a MT Power, a Special, a ST Power and an Elite.
The second row is where you find most of your Special abilities, ending in an Elite. This is also where the weapons differ the most, aside from their special mechanic.
The third row is your role abilities for tanks and healers. Like the first row you have 1 Basic, 2 Power, 1 Special and 1 Elite. You generally wanna avoid this line as a DPS using a tanking or healing weapon.
Similair to the first row, there is a ST and a MT Power ability, while the Basic is a non-target type (AoE or auto-aim).
Once all Active abilities have been learned for a weapon, you can take the first Capstone. Each Weapon has 9 levels of Capstones, each granting HP, Attack Rating and Heal Rating (same values each lvl). The max level for any one weapon, can not exceed the total number of lvl 1 Capstones across all weapons.

Passive Abilities
The square passives are the ones that you make part of your build, and are either ability or weapon specific.
The circular passives are often refered to as global passives. These passives become part of your Basic Build (stats without any gear).

Weapon Passives
The first 3 rows contain a passive which modifies each of the active abilities (excluding Basic abilities). The Icon will match the active ability, which it associates with, as will the position in the row.
The last 2 rows modifies your general damage, and how the weapon mechanic itself works.

Global Passives
For each of the three roles, all three weapons associated with that role, will have the exact same global passive setup. Even across the roles, the setup is mostly the same. Using the DPS pages as a basic, the Healer pages have Heal Rating instead of Hit Rating. Tanks have Defence Rating and Evade Rating, instead of Crit Rating and Crit Power. The important thing of note here, is that Healer weapons lack Hit Rating, which gives double healer builds a disadvantage in early game for solo content. Tanks equally lack the big heavy hits from Crits, but it is better than lack of Hit Rating.

DPS/Solo
When choosing your weapons there are a few things to consider. Especially in the early gameplay, using Healer or Tanking weapons for DPSing/Solo content, come with a few limitations and disadvantages. With that said, every weapon is a viable DPS weapon.

Healer Weapon DPS-limitations (Fist, Rifle, Blood):
For solo gameplay the Healer Weapons suffer the most. The Allocation system help some, but it is still harder than any other Weapon roles. The lack of Hit Rating in the global passives, means a lot of your hits will be Evaded (0% dmg) or Glanced (30% dmg). The Glanced attacks also can’t Crit. As such your Crit chance is lower than your character sheet implies.
For group gameplay, your only ST Power Ability, is a 5 Energy one. Early on, the lack of Crit Rating, means you will only generate Energy at the default regen rates (Primary: 1/s, Secondary: 1/2s). Being forced to use 5Energy abilities, means you have to rely more on your Basic, and as such reduce your damage. Using the 3Energy AoE Power is a solution to this, and for some fights an advantage (adds), but against a ST, AoEs generally do less damage (with some exceptions).

Tanking Weapon DPS-limitation (Hammer, Shotgun, Chaos):
In solo gameplay, Tanking Weapons are more viable than Healing ones early on. Since you don’t have to worry about ripping aggro, you can freely use the Basic and Power abilities from the third line. This gives you more abilities to pick from, including a 3Energy, ST, Power Ability. Tanking weapons come with the same Hit Rating as DPS ones do, but they lack the Crit Chance and Crit Power.
For group content, DPSing with a Tanking Weapon, limits you to the first row, when it comes to power abilities. Like the Healing Weapon, you are forced to use a 5Energy, ST, Power Ability, if you want to go with a ST one.

As you get better gear, and gain more stats for your Basic Build (global passives and capstones), these disadvantages will mean less and less. Once you max out your Basic Build, your only limitations, will be in the number of Active Abilities, that you can build from.
For any Weapon combo, i would recommend looking for the Hit Rating Passives (Tanking and DPS pages), as there is a total of 14.9% Glance Reduction to gain from this (my Mythic lvl 1 Hit Rating Glyph is worth under 10% in comparison). It is also a good idea, especially for double Healer combos, to get a Hit Rating Glyph ASAP (Blue talis/weapon) and level it up as your primary focus when it comes to Glyphs.

Tanking:
It is highly recommended to run two Tanking Weapons, but it can be done with one. Most tanks use a DPS/Healer setup when it comes to Glyphs. Most tanks also run 3 cooldowns/mitigation abilities. These are Special and Elite abilities, that in some way helps you die slower. Each tanking weapon come with a Special ability focused on mitigating and one focused on healing, placed in the second row. The Elite in the third row is also used for mitigation, but also comes with a secondary purpose (impair, taunt, anti-death). Each weapon also come with at least one taunt and one impair. For hate generation, use 1 Basic, and (i would recommend) 1 Power per weapon, from the third row, as they all have extra hate generation. My personal preference is to run an Impair on the gadget, but alternatively this can be switched with mitigation.

Healing
Like for Tanking you are looking for abilities in the third row, and a few from the second. Blood works to protect and heal. Rifle relies a lot on the group healing themselves off your leech buffs, along with minor damage. Fist is the direct heavy heals. Third row Elite is an AoE for Blood and Fist, while Rifle has a ST anti-death heal. Third row Basic completely or paritially heals whoever has the lowest percent HP in the group. I believe, Fist aside, each weapon comes with a ST and an AoE Power ability. Like for Tanking, it is recommended to use two Healing weapons, but likewise can be done with one.

4 Likes
Newb Build Questions and the Opposite Connundrum
Consolidated list of Gameplay Guides
SinOfTheWolfs August 6, 2020, 7:44am #2

OBS!
With the upcoming rebalance, parts of this guide no longer holds true. Some of the more major changes are listed below. I may or may not redo this guide to fit the new setup.

The weapon unlock prices are as follows:

Noted thanks =). If i end up redoing something like this, I’ll make sure to include it.

This post could be turned into a wiki format which might be better suited to such a guide.

Mod edit: The post has been turned into a wiki for @SinOfTheWolfs