Here you go.. made a Damage Meter mod

Awaiting all the screenshots here with all your fancy DPS tests 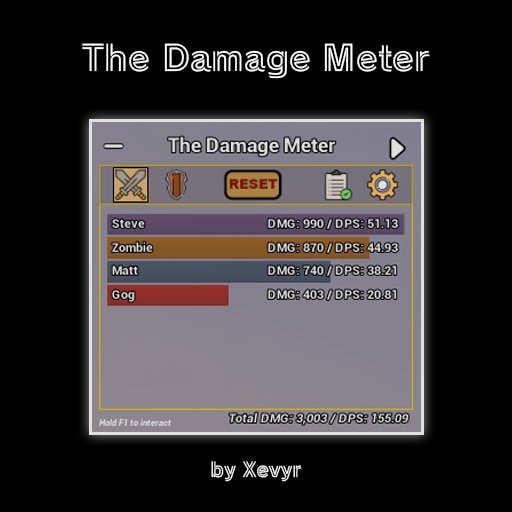 That looks way cleaner and better than most parsers for some other games. Very well done.

Yea, except the fact that there’s nothing to parse

Btw, update coming in a few that preserves data on death (didn’t account for the fact that the actor gets completely destroyed and a new one created with a different ID on player death so currently the data is wiped since it was stored in a component of the actor)

It’s when I see mods like this that I regret playing on a PS5. Dude, congratulations. That mod will be a godsend for content creators and players who like detailed stats alike.

You can already see the world turning upside down and causing controversy over longtime “recommended” builds on youtube channels eh?

haha
I’m curious to see the reactions too

This is awesome. Kudos, dude.

I may not be able to use the mod, but I’ll sure benefit from its results. This is a bonus for the whole community.

This mod just got a huge update.
On the surface it might not look as much, but it got redesigned internally.
There is now also an exprimental feature to track damage of other players (up to 3), so you can compete with your friends in dungeons.

Does this apply to thralls too?
Sorry if it’s a silly question, I did not try the mod out yet (due to the game being redownloaded - because of an error we discussed before -, and the download speeds are awful around here, but I digress).

It already measured thralls following you originally
Like, here’s an example from a while back where I had identical war party thralls competing against a well trained one

every time I see this thread, my brain fills in “damage meteor mod” because of the other thread…

I mean, meteors are highly destructive things and do a lot of damage

every time I see this thread, my brain fills in “damage meteor mod” because of the other thread…

There is a mod that has a spell added to sorcery that does drop a meteor on a targeted location. With predictably hilarious results.

@Xevyr
A crossover? Would be cool if we could measure and display the damage meteors deal!
Especially with spell-casted meteors.

Don’t know how on earth you keep coming up with such good, winning ideas at this rate.

can you also record when healing was used this be nice to use in a PVP tournament when healing is suppose to be restricted.

No, it doesn’t measure healing, at least not for now.
Only damage done and damage received.