I think this should be done and will increase the player base, yall can charge 30$/ 40$ dollars

to raise money if needed this game has a loving player community, I think no one will say no to that. Please answer my question. Is conan exiles upgrading to ps5 version yes or no ?

Lol. They couldn’t even make it work for the old systems. Imagine the exploits on the new system? everyone will be flying around and stuff. You will think its Microsoft flight simulator

This would be nice to happen, we ps players would even like to have some mods available too, it would be awesome and surely it would give more reasons for RP servers. Still, I believe it’s to soon. Ps5 has great delays still on deliveries and it would be unbearable to know that the game is changed so far and I still don’t get my ps5

. However I am very interested to get an answer to your question 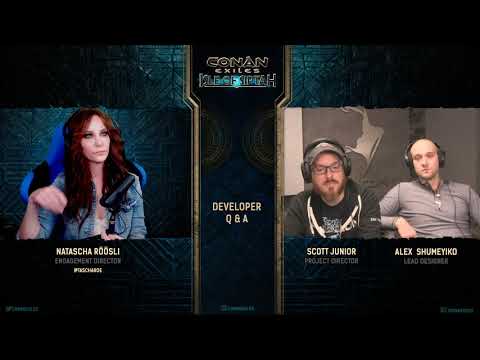 It’s compatible with PS5, not sure if they are going to do something more in the future to enhance the controller features like some games have. But I can confirm it’s playable on PS5, I’ve been playing it since the day the new console was released. The load times are amazing and there are details I’d never seen before with my original PS4.

Thank you for the info.

I think Unreal Engine would need to be upgraded version 5 for the ps5. I doubt Funcom will implement that change while the backward compatibility is active.

@Narelle, thank you very much for once again

.
@Tascha is you on the video? Girl you are stunning.
Allow me to say that every time I see one of your videos, with Nicole or Andy though I enjoy them very much and I beg you to do more please, a sweet melancholy of beautiful memories is covering me. I really miss Eric, I really hope he is happy wherever he is, still I want him back

I’ve been told it works on PS5 right now. And runs way better than PS4.

Should for all intents and purposes consider Conan Exiles a PS5 game at this point.

I hope they don’t upgrade. In the videos I’ve seen CE runs great on PS5.

I don’t want an “upgrade” that makes it run worse because of better graphics or whatever.

Guys this is great game, does graphics can improve way out of expectations, that’s why I would love and upgrade of a ps5 version. Cause you know is all about competition I’m there developers working in a game similar to this game, if they never upgrade they gonna stay behind, if you guys see what demon’s souls did on ps5 is crazy good. Is like you enter the race

or you out . That’s how I see it. If the charge against for remaking the game so be it, but don’t lose the race, ps5 community is rapidly growing so is just a matter of tipe for games with old graphics to die, I don’t want to see this game die

Well 1 in a million think this way

Do not please bring it there, 1 in a million to 8 bil population is still 8.000 people, so this is a good number too

. Some people are very disappointed from the performance of the game and this must be respected, don’t you think

? I am not young anymore and I learn how to compromise, I cannot rebel anymore, this is for youth. If young people wouldn’t rebel then life will always stay the same, so young must rebel and elders must listen

you probably don’t pvp or play on overbuilt servers…

Demons Souls came out in 2009 and was on the PS3, I own the new PS5 version and obviously it looks great, but I’m not sure it’s a fair comparison.

Conan is a much more recent game, and quite frankly, looks amazing in my opinion! The difference between the game on PS4 and PS5 is noticeable simply because of the power of the PS5, for me, it’s been basically game changing. No lag during purges (or ever), the ability to see and make out every single blade of grass, and much more, the game looks amazing!

I’m not so sure now would be the time to start doing graphics upgrades. Just the opinion of someone who has been playing Conan on PS5 since the day it was released