Hello friend, i got suspended recently, let me share my experience with you, may something could help. I had a big base, not humongous, just big scathered around the forest in the north to not cover the trees, it stands for 2 year, and recently some players started to complain about it under the flag it was lagging the server, a lie, they harassed me over weeks after i returned the ban and onpenly told me that they report bases get to loot. I had good conversations with FC support, regarding the matter and was told to avoid somethings, specially making pathways between buildings for long distances and using lots of space for few stations or just for decorative, and of course blocking pathway, passages, spawns and resources or having things like statues, flags and other stuff to block building places. Now im making a 20x20 (foundations) base and growing up vertically, i choose to had only two altars and no huge animal pen, i place and remove it after i got the pets i want. Im using less lights possible. The key, i think is to go as compact and centralized as possible, with less blocks and less placeables. Another thing is to have your base closed, otherwise some one can go inside and get some lag and starting fantasying that is because your stuff, so better is keep those noobs outside. I was used to keep my base open on pve-c server and had free stuff for people placed on siege galdrons, but some people can use it to screenshot the interiors and use it againts us. I bougth the battle passa and some stuff on bazzar im enjoying a lot to be honest. Im giving a second chance to the game, but even with all the care im taking now to not hit the ToS if get banned again, this will mean to me that this game cant hold the build survive genre anymore, and i will forced to move to another game that could.

Without diving into the depth of the thread I’ll just say if you play on official severs mainly pvp I would advise not buying a battle pass. Bans are to common currently

Every company has a policy! Nothing that they could say could be crystal clear. Like your title, you think that you were clear to what you say but I had to read your post to understand that you protest for a building limit, or you don’t pay… You have every right to do whatever you want, either way the game will continue to exist!
It’s many time explained here why a building limit will change nothing. Search the posts of @CodeMage, he made literally hundreds posts, efforts, to explain simple things. This ofcurce if you care, if you don’t and still, no matter what, you hold your post, then nothing can be done!
This is my sort explanation!
Rules are the way they suppose to be, good enough to get you out of your comfort zone, so when you play in these servers be always cautious and respectful to the others and the game itself! Official settings cannot exist to other servers, only on official servers. They are fixed this way to apply the uniqness of these servers!
The game is not only a building game, it’s a lot more and it can shelter and must shelter, all the game styles. So build with respect, play with respect and fear nothing. And do not the mistake me and @EduMariano did, to confuse kindness and charity with respect. They are different so we pay the prise! I let alone everything to decay and Edu lost them from ban!
One way or another we have nothing from the past.
But I personally don’t care, what I gained all these years is knowledge how to stand back in my feet in no time, so I fear for nothing and I envy nothing!
Cheers

We know the rules on Official Servers are restrictive, and they aren’t always intuitive to everyone given the different play styles you can adopt and the general freedom of where and how you can build.

If you do find yourself in the unfortunate position of being blocked on the Official Servers, it will have been after a few temporary suspensions first. In that case, we encourage you to reach out to us through Zendesk. We will work with you to make sure that you do not lose your battle pass. Being blocked from Official Servers for building violations does not mean that you can never use the things you’ve purchased again.

Hello im in doubt is it ok to officials? The base is 20 foundations radius and im afraid of placing things around and being accused of land claim. Un fortunatelly the altars refuse to be near each other and there is a zath altar on the center so other must be around 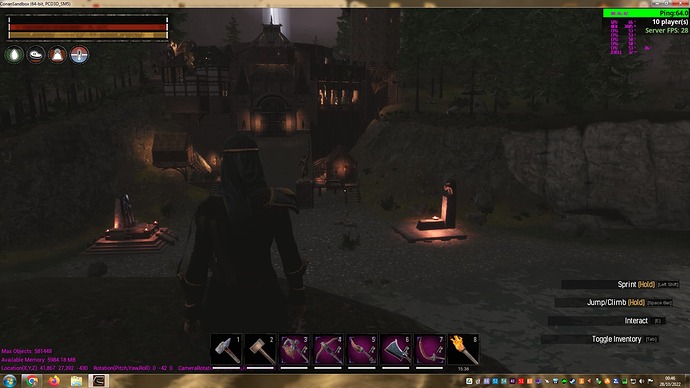 Does the altar generate mor land claim? They are also inside base claim radius, do they will extend the radius?

They would extend the land claim radius. What I see in your picture, you look like your not overbuilding…but I cant speak for the ones who hold the hammer.

I can create a perimeter 500x500, place foundations on this perimeter here and there so nobody can build inside and build a wonderful base with 2.500 pieces

. You cannot imagine how creative troll players are! Again, if building limit is a solution they will do it.
But you can easily understand that it ain’t and goes against the creativity and the needs of this game.

We had a very small base in a cave. The clan built us up with wells full of safes, then they all went out and changed their name and left one person there. Why are we banned??? Just a terrible injustice

People have already understood how this system works, they are not afraid to build up the whole map as they want, moreover, they can easily do so by blocking anyone they don’t like.

That would be helpful

Well, there are always private servers as well as solo/co-op servers so you aren’t “blocked”.

While I believe that if I will be banned I will understand the reason, I believe that a warning system, other than read the rules if you want, would be progress! I don’t know how, I believe they will find the way, but the way it is right now goes reverse to the great work they do. People asking for building limits do not understand that this would be the easy way for them. Not applying building limits makes it harder for them, but instead we show gratitude to their efforts why apply ruthless criticism! Some costumers believe that because they pay they can f… k the universe! Well No!! They can’t!
But for the good costumers better and more fair conditions must exist!

Warning and explanation. No one understands what the punishment is for, although everyone read the rules

although everyone read the rules

This is false! I know at least 20 persons in my small community that didn’t even bother, they don’t care, they look others with bigger buildings and use it as an excuse to build bigger! Every time I tell them that no matter how big the others build, if they will be reported, they will be banned and not the others with bigger buildings but no report, I get their frustration like it’s my fault or their fear that I am a griefer. I have numerous persons in the past that accused me for griefing because I asked them if they understood the rules!
I never ever report anyone!
I don’t care, if one server is a big pile of s… t because the players there are d… heads I move to another as soon I will help the one I promise to.
If you blend with crap, how do you think you’ll smell? So I move on.
The greatest reason I don’t pvp anymore is because a lot of people will find a weakness this game has and use it for win, they are no competitive, they are chickens with shiny pikes!
I am sorry you go through this mess, if you don’t like pve, find a private server that justice is better, but you have to search a lot, really a lot. Good luck

The message when one logs in about ‘reading official server rules etc.’ is a type of warning, a secondary warning about reaching or perhaps approaching a block placement limit would be a great addition. I don’t count blocks, I have things to kill and be killed by.

I feel that maybe investigating each instance of potential overbuilding or land claim abuse would be a lot of work on Funcom’s end. But, then again, isn’t this game what they do all day!?

I have a wee base on an official server for my region. I am in fear of it being deleted for an infraction I am unaware of, and so I am not really advancing on that server any further. I’ve gone back to offline play.