It’s time to fix the floor under red mother fight, we’ve been asking for 2 years

Please just fix the ground under the red mother and thralls falling thru it, we’ve asked and asked and asked and asked, either tell us it can’t be done or just fix it, it’s actually past the point of being painful that you guys haven’t addressed this yet, multiple dlcs later it’s still broke, it’s time to fix these age old problems before anymore dlc, out of respect for you fan base fix this, the more dlcs the more of a slap in the face it is that we have a convoluted crafting menu that hasn’t been addressed as well, quality of life needs to happen

If they release another dlc without fixing it I’ll be pissed, like it’s passed the point of being ok for them to ignore it, and then add a leash mechanic that breaks most fights especially the red mother fight when dragging her away from her area is the best option to avoid falling thru the earth a lot, sometimes it seems like they don’t listen on purpose just to piss us off

Honestly never had her go under. XD

The red mother herself I’ve only had go under once but it’s the thralls usually who get clipped onto the ground, just a head sticking out😂

Honestly never had her go under. XD

I haven’t either, on officials. Since I started playing on a private server, I’ve seen more issues like that. It only happens when the server load is high enough that the AI gets choppy, so I would speculate it might be some issue where the AI decides to overcompensate the movement lag or something.

Thralls, on the other hand, get pounded into the ground and stuck there all the time. I don’t remember ever having a fight against the Red Mother without my thrall sinking into the ground until he resembled a particularly ugly and useless mushroom.

Trying to get FC to focus on stability and permanent fixes for bugs that are years old, resulted in me getting a tempory ban. FC does not listen to its consumers and will continue to focus on dlcs to boost income, over fixes that would improve gameplay. We cannot direct them in anyway because they simply do not care about anything other than profits.

Watch what you say on this forum, moderators remove posts and ban posters based on personal feelings more than rules and regulations.

So maybe it wasn’t what you said, but rather how you said it. People often fail to see the difference.

The reason meshing issues still haven’t been fixed is probably because it affects the whole game world. Trying to bend it into the right shape in one place may not be effective, or even possible, without working on the entire map. So it’s possible they haven’t fixed it because they’ve either decided to fix the entire mesh in one go (which takes an enormous amount of time and effort) or, more likely, that it’s not cost-effective to try to fix it at all.

Me, I usually give my thrall a spear when I go fight the Mama because with a spear, he/she can reach and hit the Mama even from underground. I haven’t seen the Mama herself sink into the ground, at least not very deep and not in any permanent fashion.

At least I won’t have to worry about the thrall hogging all the glory and being the “hero” of the story when she’s stuck in the mesh. I actually need to do most of the work in the boss fight. No more situations like this: 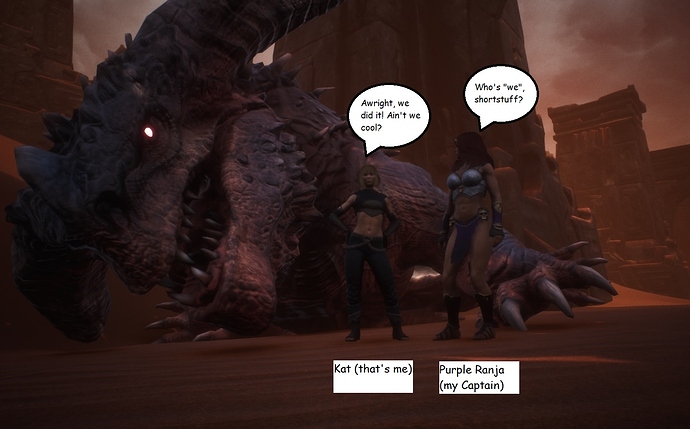 give my thrall a spear when I go fight the Mama

Thanks! Definitely going to try this. My current character doesn’t have the venom-infused spear yet, but I’ll fix that problem as soon as I am able.

Tell them that the ground under the red mother is one shotting you in PVP and the whole development team will drop what their doing and immediately start working on a fix.

Especially with the leash so short now, running the distanced needed away enough from the red mother to unplant your thrall causes her to slide back to her spawn and regen health to 100%. I have to hope my thrall gets in a couple good hits now and dual her on my own after the thrall gets planted.