on private and official servers. Started after 3.0 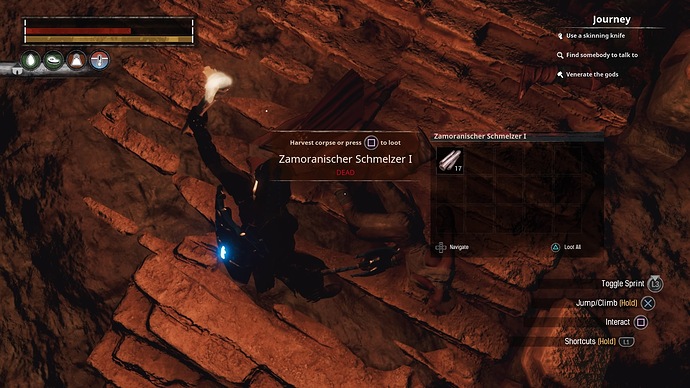 @Community. Thanks for input.

Isle of Siptah by any chance? It’s been a bug for a while

Exiles Land have to check Siptah.

Yeah, I haven’t seen that bug for some time, but I know it’s an old one. Could be a smaller, isolated case for you though.

I have this for more than 2 years. But the other way round. When they are dead or the follow and unfollow message has the English names while I am playing German version. I think for most German players it’s not a big problem and nice for me to see how the followers and npcs called in English

Edit: I remember that someone told here it depends on the server language settingsbor location.
But can not realy confirm this beacuase the last server I rented for test half year ago was located in Frankfurt Germany and I still had this problem.

Think someone should check the translation files or dbs. I never heard about other languages that have this. It’s always German and englisch

Went through Sinners refuge this morning only low level npc has German names not the named one’s. Our Exiles server is based in US will have to check it out. We play less on our own server. It’s kinda enjoyable to find something different and determine what they are.

Yes, its german. Zamoranischer Schmelzer = zamorian smelter. Curious if this only happens in Sinners refuge or also other places.

Edit: It seems that the forums doesn´t let me write “Gerber_” lol so I attached an underscore.

Scavengers berth and other small settlements. Have to try Siptah tomorrow.