IIs there any way an acknowledgement checkbox could be added to the New BattleEye prompt?

In the long ago, I launched Conan from Steam with a single click.

Then a Funcom Launcher was added, which was a decision.

Now, since the patch last week, I am prompted to acknowledge BattleEye information every time I start the game.

This was a miss, guys. Unless something in the verbiage changes everytime I launch the game, a single acknowledgement with a checkbox to record it will suffice.

This is especially annoying since whatever process that was added a year or so ago has about a 50% chance of causing a game crash on connection to Funcom Live services. Each time this happens, I have to Task Manager close the game, tell Steam to Stop Conan, restart the Launcher, launch the game, now acknowledge fairly standard BattleEye information, wait for the three skippable areas, and roll the dice on connection to Funcom Live services.

Since it is obvious you can update the Launcher without an update to the base code of the game and you can and do toss out updates to the live version of the launcher, please remediate this as soon as possible. 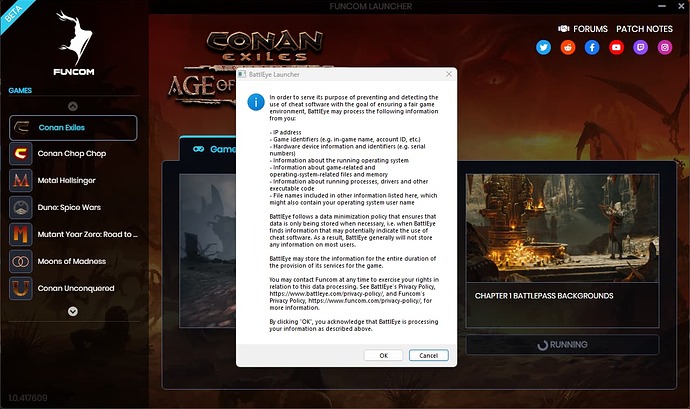 This looks like a bug. I’ve not had that pop up myself. No clue what would be causing that. Or the other issue causing a FLS crash.

I’d recommend tagging this thread for Bug reports and going through all the typical troubleshooting steps for a game not loading properly if you haven’t already. Then list the steps you’ve taken so there’s a better chance at a reproduction.

I also have Testlive installed. I am wondering if that is part of it.

I was just about to ask if you by any chance have testlive installed
So in the patchnotes there was a reference to using an upgraded version of BattleEye from now on.

So you’re constantly switching versions due to this

I have only played Public Beta Client twice. I get this every time I start the live version since I installed the current Testlive client.

Edit: I just tested this, and it only happens when you start the current live build. Since Battleye has been updated and both clients use the same install, the message is to accept with the Live build.

I envy pc a for a lot, but certainly not for this. When i read all these things, i am so happy i stay on console. One distant button to turn on your console, choose conan press x and play… What a bliss.

One distant button to turn on your console, choose conan press x and play… What a bliss.

Oh, that reminds me @stelagel did you see the latest feature in one of my tiny mods?

That’s only one button as well

the latest feature in one of my tiny mods?

You got me on the mini map

. I didn’t had these intentions tbh. I know that these s… t can be really annoying, you paid for the best and still have issues. I know you get extra, way way extra, but this “price” sometimes is too much isn’t it? Sometimes i have to restart my console and i go upset, i couldn’t imagine pc, that i read sometimes that they install and uninstal all the time

. Not to mention the “proper” order… Nahh you didn’t do it right, again…
I just couldn’t do it! I admire you guys for your patience.

If you want to bypass the slow launcher, make a shortcut to this executable:

Though since testlive the BattleEye pop up still comes up.

If you only play Singleplayer, you can use the other executable and no BattleEye pop up will annoy you. So no BattleEye enabled and no Funcom launcher.

Thank you everyone for pointing this out.

I’ve passed this over to the rest of the team for further investigation. As soon as we know more we will update this thread

Thank you for your patience and understanding.

Which mod is this? We needs it.

If this has to be manually done on every login once on live, i hope it is for combating hack scripts. If so, then i can live with the extra step to not deal with speed/teleport hackers.

Can anyone confirm that it is the case though?
Because what I assume is that it will simply ask only if you’re switching between the two versions and doesn’t if you just stick to the beta and not log into regular.
Which means it should automatically fix itself as soon as the game updates and there’s no longer an old version