I play Conan Exiles and have just started a new game with my partner invited to play co-op. I have the AoC mod but no other mods running. Before today I have had no issue with thrall taming so this really odd thing happened which I figured must be a bug. We have been getting ready for our first Purge and yesterday I tamed 2x lvl 3 Darfari Archers with no complaints, today however, I tamed a named lvl 4 Archer (Sorschut Eyegouger) I found in a camp called Bonebreaker’s Bend. After taming on my lowly wheel of pain he appears to have no attributes and 0% growth chance.
His panel reads like this:
Attributes Growth Chance
Strength 0 0%
Agility 0 0%
Vitality 0 0%
Accuracy 0 0%
Survival 0 0%

According to the wiki he should have Agility 7 and Survival 15 at first taming and random growth chance percentages on all attributes. We currently have 10 other thralls in our camp and all of them have tamed with normal attributes and percentages. This is my first bug report so please let me know if you need me to provide more information and specifics. Thanks

Welcome to our community.
Please be aware that mods can affect bast game functionality and add unintended issues to the game. Please make sure this isn’t an issue caused by the mod by trying to replicate this problem with all mods disabled.

@Ignasi this is a know issue that has been reported a few times as far back as 21 days ago but so far with no fix. See below.

Game mode:Online Private Problem: Bug Region: US Playing a private PVP server, i captured Sorschut Eyegouger. After breaking on wheel, i went to place the thrall. It did not have any preset stats, but i took it to level. The game said it leveled up, but the stats did not change. HP was like 1200. When i had it start following, i didi have another thrall folllowing already. It swapped them like normal (have done this before with no ill effects) and the other thrall is still okay. Being…

Game mode: [Online | Singleplayer] Problem: [Bug] Region: [US] Sorschut Eyegouger is placing with no base stats and zero growth chance. Leveling him up also does not fix it. Steps on how to reproduce issue: Get Sorschut Place him Look at stats

Game mode: Any Type of issue: Bug Server type: PvE Region North America Version 194338/23382 This Named Thrall, once placed came up with 0 for all skills and 0% chance of growth for each. I finally replaced the old style thrall which was limited like all other older thralls, and was disappointed to find it so bugged. There are some other articles on this forum about this thrall being some sort of limited T3 grade Named or whatnot, but in any event, it’s pretty much in need of some attent…

Thanks for your response. I did a restart with AoC switched off but Sorschut was still the same. I took him out for a bit and levelled him up hoping it might change something but although he levelled up he got no additional attribute points and growth chance remains 0% on all. It was a shot in the dark 0% of 0 is still zero

. We survived our first purge and decided to move our camp further north. Sorschut can be replaced so we decided to break our bond with him, may he r.i.p. If his issue gets fixed hopefully someone else will find his reincarnation in better form haha. Cheers!

I can confirm that a newly spawned Sorschut Eyegouger (ID: Darfari_Cannibals_Archer_4_Darfari) has 0 stats and 0% growth chance. When leveled to 20 via the admin command, he gets perks but the base stats outside the perks remain 0: 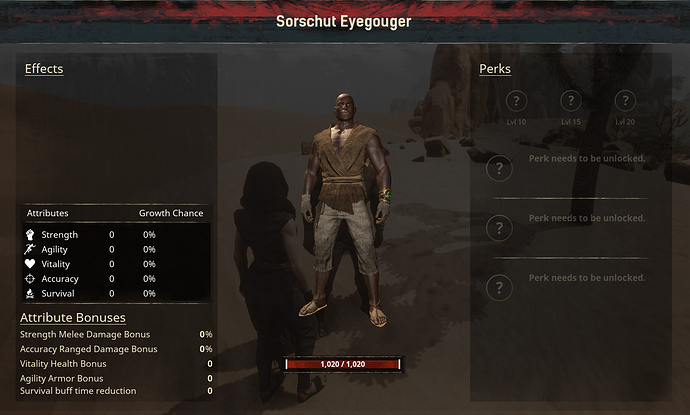 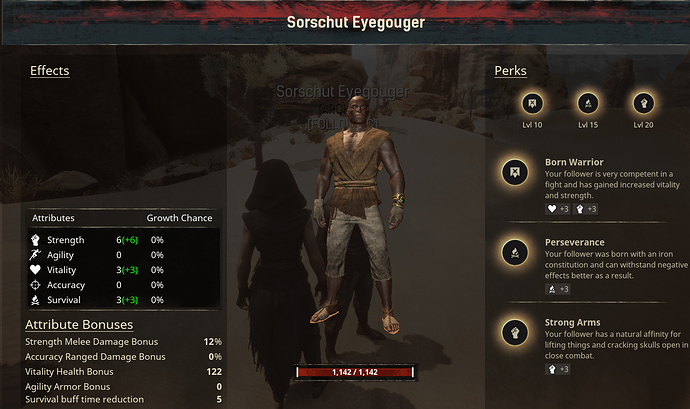 Thanks, we’ll poke our team about it.