Other than that, I don’t see how they would do it without cheating

if you have a thrall already with you, you can free one and thebfreed thrall wonders to the end of the camp. That is its set home spot. Have it follow you and level it, then stop following once done. It returns to that original end of camp spot.

Or if there is a cage near by the thrall rescued they tend to stick around after they are released instead of going to a specific area in game.

Indeed. I didn’t even consider that possibility due to thralls from cages usually being weak. But the more I think of it, the more I think that’s what happened. I mean, I’ve done it, without the part of leveling the thrall. But I know they stick around the camp from which they were released and can be usefull to act as bait. For instance, early game I do it with those cages on the pirate camp near The Spit where you’ll find Askia the Lookout. I take a bearer I released from an exiles camp (Grave of the Leviathan, pretty good bearers early game) farm that other black corsairs camp, release the thralls (often two, always bearers) go to The Spit, release the thrall there (always low level fighter), go back and everyone spawned again and is fighting those thralls I left behind, leaving me an almost clear exit route. But usually all those thralls are pretty weak, so that never crossed my mind. Even a weak thrall, once leveled, can be a tough cookie for other npcs, as long as they aren’t high tier. The camp the OP seems to be talking about has some hard mthfckers outside the cages, being an accursed camp. They would kill a low level thrall in a heartbeat. But if he is leveled, this might tip the scale. So maybe that’s what happened. Someone is playing catch, level and release in that camp…

So maybe that’s what happened. Someone is playing catch, level and release in that camp…

If this is happening, I wouldn’t even be surprised if it was out of ignorance. Most people don’t understand that Stand and Guard sets the new home position, and Stop doesn’t do so.

I’ve encountered a similar situation in official server PVE Siptah where thrall (in my case it was T3 bearer) was released from cage and left into camp (River Watch keep) - his ‘owner’ only took his headgear. He kept continuing to kill other spawns (even T4) because he was strong enough and it seems he had pretty good health pool. It went on about 2 weeks then i found a solution - lured undead boss from Lonely grave into camp and boss killed him. It is not a solution for Your situation tho. I think it is worth to report this case because you do not have any tools to solve this situation.

I was in the same boat looking for Llor, and I did find her a few weeks ago in the accursed citadel. After farming that place over and over, I noticed that it is actually a really good place for t4 crafters of accursed tribe. Got Acastel (carpenter), Llor (armorer), Marn (taskmaster), stoker brahm (smelter) and the usual ulric/markos/berserkers. For some reason, I also found 3x Beast Tamer Varet there while farming for Llor, but it seems to be somewhat rare to see these named fighters.

Long story short, definitely recommend farming this place (accursed citadel) if you have a wheel base near it!

I have had a similar experience at Leyshrine of the Goblinoid. I was going to farm that place looking for t4 but I noticed someone opened a lot of cages and there were 4 Thralls guarding just outside the cage. They kept killing everything until I managed to lure the berserker spawn down and he made quick work of them. I think this was more of a honest newb mistake because they were all in shabby clothes still.
However, if like in OP’s case, the person spam releasing these thralls decides to give them end game gear, there is no way a single berserker would’ve been able to clean it up…

Definitely must be a glitch or bug that lets thralls be on guard right outside the cage. Shouldn’t it normally say “returning home” after release?

@Kaldenur I farmed the sh… out of that blasted citadel already, with little to show for… I will give it another go, thought! Thanks!

This one has seen this issue several times.
Player releases thrall.
Player equips thrall.
Player leaves thrall in it’s default “guarding” state loitering in camp where a thrall normally cannot be placed or set to guard.
Abandoned-ish thrall with decent armour does very bad things to any potential prisoners with jobs nearby.

As for cage thralls.
On Single Player, almost exclusively low tier.
On the servers this one haunts…
Accursed Berserkers, Named Exiles, Invaders, and Bearers with some regularity. This one would say one in every ten comes out Tier 4 on the private. One in every fifteen or so on public.
This is of course anecdote. But OP’s issue is not new to this one.

There is a work around.
Poison gas is lethal regardless of game mode.
Poison gas is on no one’s side and is an environmental issue. As is the explosion when it is ignited.
Orbs solve the problem easily.
Ponder one’s orb.

I’ve also left a freed Thrall in the camp, it’s like an experiment, how long will he survive?! But then he’ll definitely die, that’s what usually happens. I also did this on cages where other freed thralls were already standing. Well, I’ll redeem it in the future. but it is interesting that 6 Thralls take over the camp there.

They are not necessarily all from the same player and are not automatically malicious. so try to address it in chat at other times, if you can.

Sometimes a funny thing happens when I release and forget thralls. Somehow they appear in other places, not very far, but still not close to the camp where they were being held prisioner.
This is particularly true for that small pirate camp near the burning bonfire where a burning skeleton jumps out if you get close (on the north, near the pirate ship filled with skeletons). Boatswain? Something like this…
That camp is a good spot to farm station t4s, even better for early game thralls of all professions because the one facing the cage can be very easily snatched without alerting the whole camp, as long as you kite it.
Well, when I rescue the prisioner on that cage, sometimes the guy goes really far, like to a strech of sand on the sea. It happened at least two times. I never got a good thrall out of that cage or the one close by on the margins of Sweetwater lake, a fantastic place to build a base, filled with eye candy. If you manage to build it right, you can see the lake with the giant skull on the bottom, the small pirate camp on the lake shore the haunted ship and the bonfire. The waterfalls close by are also cool. It’s a really neat spot.

from 6 - 3 was taken today i guess atleas one for sure (one player said one thrall was his and taked him by breaking bonds , the one who had not armors on it…) , 1 was killed in mob fight, but those 2 with armors and weapons are tier 3 and 2 … and killed others ( got even fight in screen ) 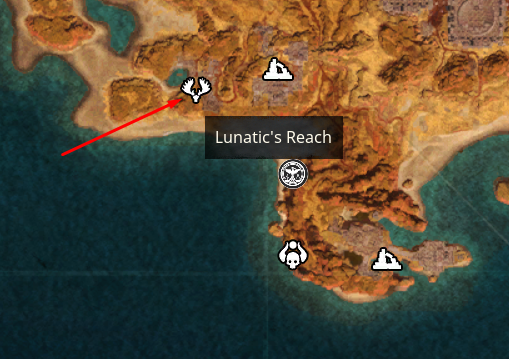 Lunatic reach is name of location 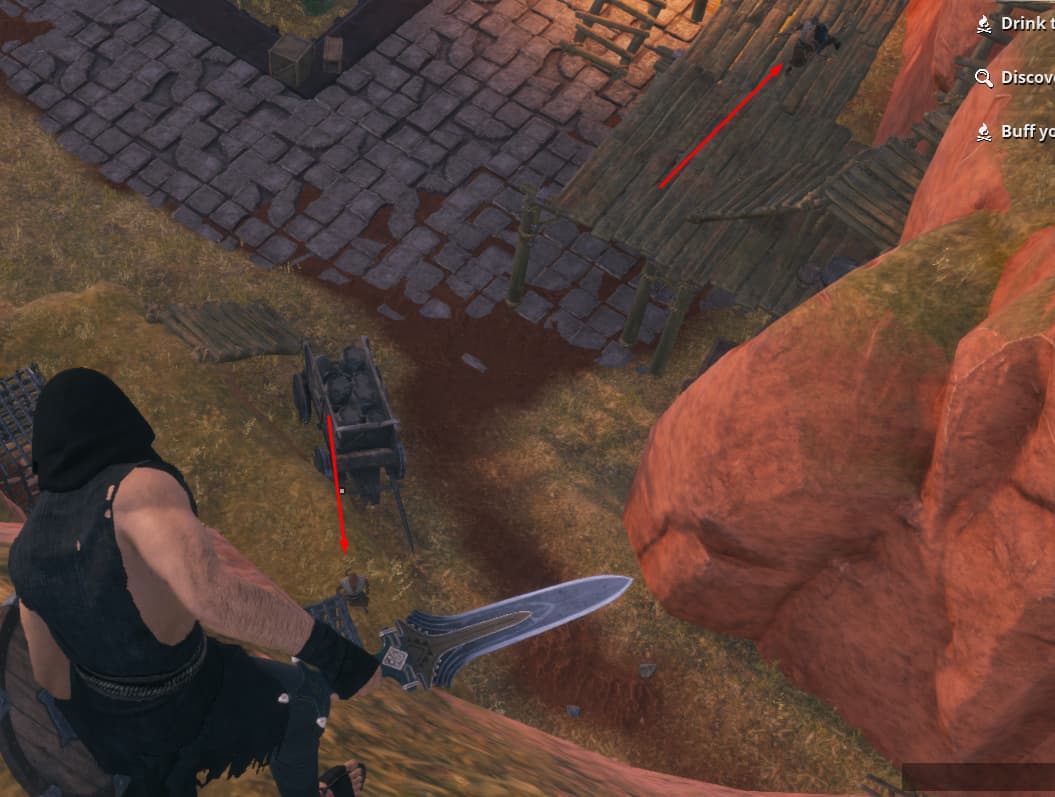 Screenshot_1181055×797 80.5 KB
when i arrived they already was fighting with camp npc ( see the right spear man , he also has nordheimer /chimerian armor) 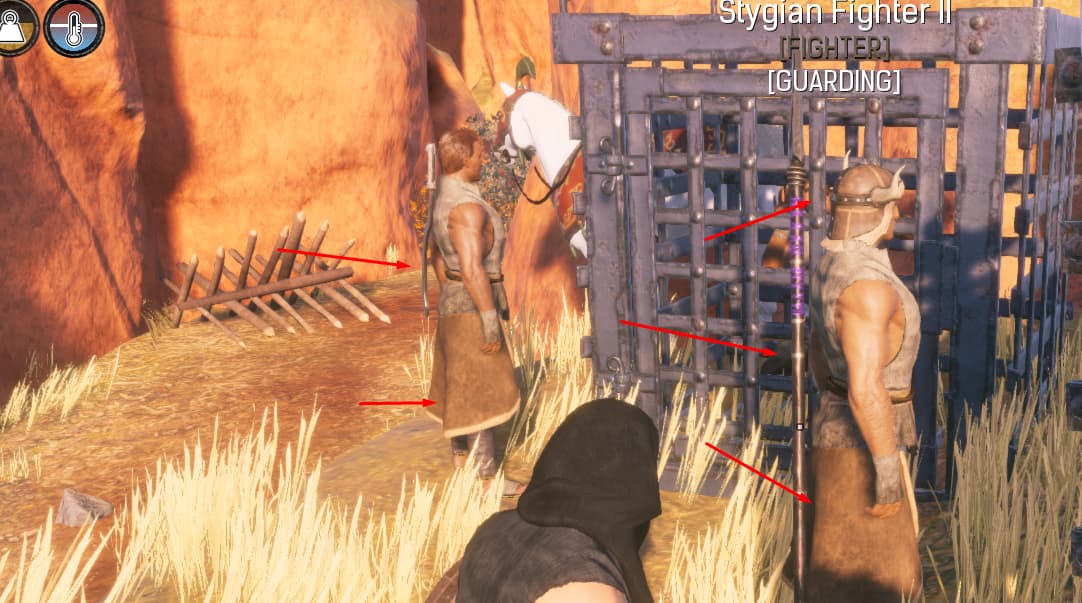 @NeoTheMatrix nope, totally different location than the one I was thinking about. My bad! That camp is near the Grey Ones pools, right?
Anyway, thanks for the screenshots. Those guys aren’t even in decent armors.
Just bring a good thrall with you and kill those mfs!

he’s on a PvE server

I released a bearer from cage 2 days ago after clearing outlying npc wanted to finish camp and believe I just put her on guard next to cage a bit still in camp later Parked my follower and came back for her didn’t that I should not have been able to. Will have to test again.

Yeah players cant place thralls in a “camp” area. They can place them OUTSIDE the camp area , then run the mobs into them.

Camp mobs will aggro the next player that comes near the camp even if you didnt attack anyone in camp.

Happens to me on occasion if someone has been there , then leaves.

Yeah i do that all the time. Park my current thrall. Grab the rescued one back to base then return for my original. I can never park MY thrall inside the camp though.

Yeah some sh*t going on there.

lol! now your giving me ideas about other types of ammo too!