[PC] The alchemist lost the black and white dye recipe

I noticed that after the latest update my tier 4 Alchemist Iblis of Zingara is no longer able to craft the white and black dyes. Was that intended? I know you may have wanted only purge thralls to have it, and I agree some high level gear should be locked behind it, but I think a dye is a bit overkill. I am not playing and building with purge in mind.

I can of course just get it from admin tab, but I try to avoid it as much as possible. 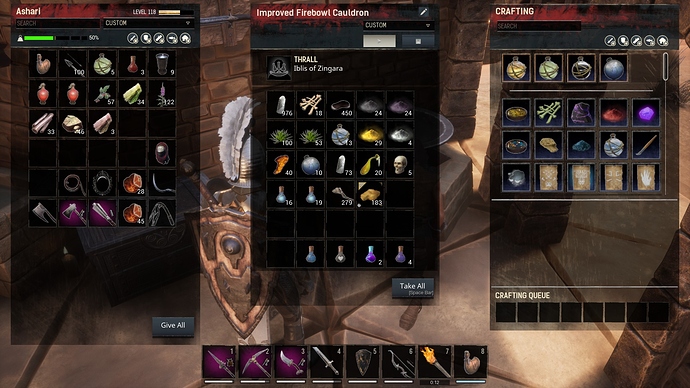 Only Darfari Witch Doctor can make them.

I could craft it with Iblis for many months now. Was that a new change this patch? I read through patch notes but did not spot that change.

Also brewer mauvelle but she is obtainable through purge only

Iblis of Zingara is missing the purge recipes because it requires a purge alchemist or the Darfari Witch Doctor.

While the above posts are correct, they did not help you with what you really want; access to purge-level alchemist recipes without using the admin panel. To do that, visit the link below and note there is even a convenient map that shows where (s)he spawns:

The Witch Doctor is the only alchemist in game that has purge-level recipes and a fixed spawn point. Note that they will not spawn 100% of the time.

I could craft it with Iblis for many months now. Was that a new change this patch? I read through patch notes but did not spot that change.

Many times, I’ve observed that when the dev team is making a quality control sweep through, they’ll set things right in the attributes of various parts of the game. Therefore when it was discovered that Iblis was doling out white and black (against the way they intend alchemists to behave), they likely corrected it.

As a player, this is my speculation after some time with these patches occurring; frankly I believe minutiae might be the reason for there being no notes about this correction. I know it’s not a small thing to you, and my hope is that you receive a beneficial purge containing Mixmaster Festus. He’s cool.

Otherwise, right above me, Jim has the best summation for the acquisition of the Witch Doctor.

Thanks Barnes and everyone. I knew the location of Witch Doctor, been there for skeletal minion materials before, and I went on and caught one immediately yesterday.

Yeah figures it was a fix then, I just expected it to be in patch notes, but I guess you can’t catch every single thing every time.

Did you use mods? I checked the spawn data of Iblis of the last months and the white / black dye recipes where never part of the bonus recipes for this thrall.

Yeah I use a bunch of roleplaying mods (Strays Thralls, Northern Timber, Savage Steel, Deco & Placeables). It would be funny if the fact that I installed Emberlight 2.1.9 two days ago actually “fixed” Iblis and removed those dyes from her. Its either that or patch.

I know mods are grey area and can break/change about anything in the game, so glad I could get a feedback from you folks.

Black and white dyes used to be rare. Only purge thralls had it.
It took us a year to get one, not they are in a cupboard, and witch doctors rule the roost.