Went on my singleplayer character to continue on my Storm Keep Castle, when I wanted to check on the progress on my level 4 Employees (Thralls) in the Correction Center(WoP) who were like 3/4th towards completion.
Much to my dismay all progress was nulled, and I instantly thought that it happend when I disconnected and reconnected to my Singleplayer character.

True enough, gave em a little time to get some more progress then relogged again and came back to see that Gruel was still being used and burnt, but all my Thralls were no longer in the lower right corner slots, but just sitting in the WoP.

Had to hit the stop and start buttons again and their progress was reset, I waited a bit for some progress and relogged, again. Thralls not in Lower right slots being converted but just sitting in the WoP with Gruel being burnt on nothing.

I have no clue why this happend but got this issue only after the patch today (15-06-2018), checking similar topics, only a few had same problems but seem to have been some days ago.

Any fix for this? If not as long as I bring it to attention it’s fine. As is now, I cannot get any of my level 4 Employees trained in my Correction facilities

P.S This topic is 100% Serious, I may use other words for Wheel of Pain and Thralls as a joke, but as is I cannot increase the population of my Storm Keep Castle with Level 4 Thralls

Happening to me, too, after today’s patch.

It does not happen only happening all the time.
In the single, after leaving the game, the wheel resets the progress and there is no chance of getting t4 unless you leave the game running in the background for the night

I have same issue after yesterdays patch on official pve-server.

I can confirm that… on our server every wheel of pain resets all the thralls to 0 after a serverrestart. cause you need at least 2 restarts a day if you dont want to crash the game, there is no way to get named thralls finished in the wheel…

Same happening on our official server, Thralls were almost done last night only to log in today and find them 1/3 tamed. Its amazing how they are breaking so much stuff every time they update the game…

Same issue here, i can confirm that everyone on my server got this issues, thrall timer reset after a server reboot.

@Funcom_Community, just to let you know, it’s seem there his an issue here

Same here. Worked before the patch, now on restart of the Server (i.e. starting my Coop-/Solo Game), the wheels get reset. V E R Y annoying. This bug is IMHO game threatening (purge goes on, but no NPC crew to be gained). “Nice” sidenote: in one of my wheels I had a higher level Slave master already finished before the patch…

Wheel of Pain and Serverrestart
Hello,

besides some buildings and some crafting stations + T4 thralls are gone after the patch, it looks like the breaking process of thralls will reset to 0 after a serverrestart.
The server I am playing on resets 2 times a day. This means its NOT possible to break a T4 crafting thrall atm.

BTW its a shame the game has been released since it still feels like EA. And the DLC…I dont have any words for this. But wont buy it till this game is fixed.

Same here. After PC Patch (15.06.2018) Build 100728/18311 all progress on converting thrall is lost. I was converting a few dancers on the wheel of pain, and closed my single player game. After resuming it, the progress on those dancers are lost, and they begun their conversion from 0%

This did not used to happen in previous build

Workaround for admin players or players who can have an admin look into it: 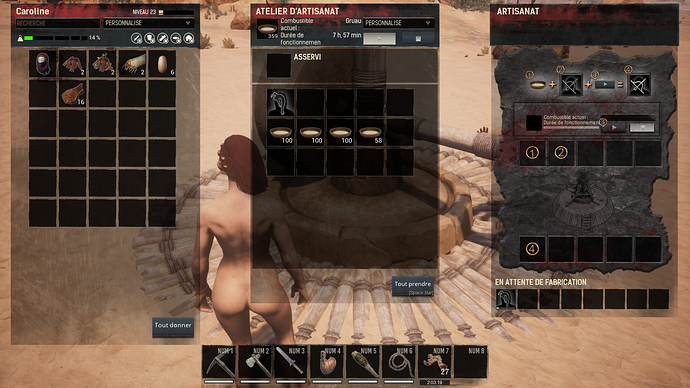 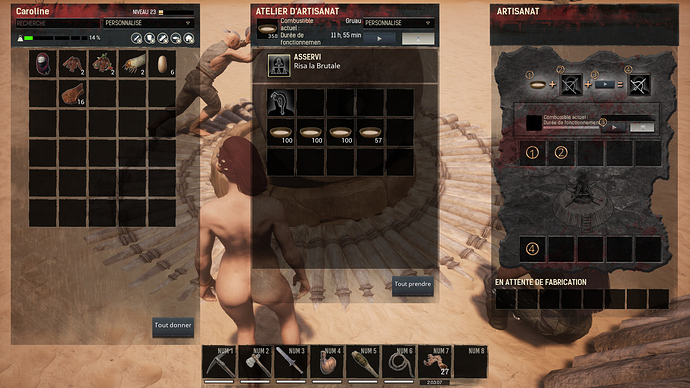 the issue might be only visual, or as you all said a reset to the conversion timer, I keep on investigating more though to find a way to workaround this crap without changing the settings.

ok so the issue is actually not visual, the timer resets for good after every log out.

Appears to be an issue with crafting in general. I set my blacksmith to make 700 reinforcements, log out, log back in, the queue is gone.

same for me, after june Patch, reset Thrall after 45min game. sry for my English im french

yep this is true

If you destroy your wheel and put down a new one, and put your task master on that new one, does the issue with thralls and server resets persist?

yes it will persist after logging out. But it should work if you don’t log out untill your thralls put in your new wheel are ready though.
If you feel your “cooking” thralls should be ready by now feel free to change your settings briefly and get done with it instantly.
personnally that’s what i’m doing, but of course not everyone is able to change the server settings though…

Happens with me too, first time I logged in after the patch a couple t3’s an named thrall reset. Didn’t think much about it then. Second time they reset… not happy. I need a dancer (don’t have one yet) an she keeps resetting. This is an a SP game, so I’ll be cheating to get around this.

I tried that, didn’t fix anything.

Same issue, i have 7 t4 thralls on the wheel and i cannot convert them in time before the official server reset even with a t3 taskmaster. This needs to be fixed ASAP otherwise the game is just unplayable