Hello guys, I’m having some big issues with in-game freezes, no matter what I do, anywhere, my game freeze for 4 to 5 seconds every 15 seconds, or when there is some buildings and other stuff to load.
All the graphics settings of the game are set in Low or Off, and I have no other program besides Discord and Steam opened. 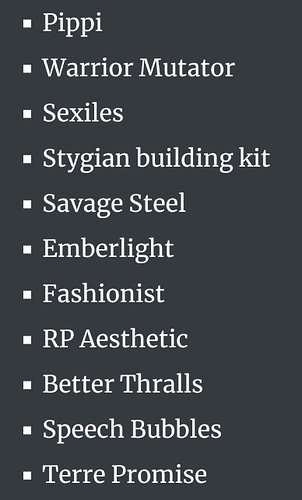 I already changed the “gc.BlueprintClusteringEnabled=False” thing, but it does nothing.

Thanks for reading and helping me

Welcome to our community.
Could you try disabling all your mods and loading into a vanilla server to see if you can still experience those freezes? If not, this would be a mod-related issue so our best advice in that case would be trying to isolate the culprit and informing the author of that mod about the problem so they can look into it.

Hi, I already did it, when I tried to play the game in solo, it doesn’t change anything at all…

Thanks for the confirmation. Would it be possible for you to share a video of this issue in action so we can get a better view of what’s going on?

Yes, I made 2 videos, I also recorded with 10 players on the server, but the numbers of players doesn’t change the fact that i have those freezes in general, so I don’t know, it even happen in the middle of nowhere, where there is no player building

Are you playing on ultra settings? Your graphics card seems a little too weak for that.

NVM - You said you’re playing on low. Still, did you have better performance in the past? Then it’s probably a new issue.

Well, i bought the game a few days ago, and since i’m playing, i’m having those issues, so i don’t know…
On other games like Destiny 2, Arma 3, Battlefront 2 or even GTA 5 (I know that there is a big difference since most of the major publishers and dev studio made those games) , I don’t have as many freezes, so i don’t know, maybe my computer is a little bit too old for the game

Your computer is weak

Apologies for the late response.
It looks like a problem with outdated hardware. We’d recommend at least upgrading to 16gb of RAM.

Okay fine, i’ll try to buy more RAM then, thanks !

As it has been hinted by others, your Vram might be insufficient for Ultra details. Try reducing texture resolution, before you buy anything.