Thought so that people would step in to defend their easy way of soloing NPC camps with dodgeroll and spear.

Oh, don’t get me wrong, I absolutely want to retain my ability to solo NPC camps naked and with a spear. I just haven’t decided that the new system won’t still let me do that. I’ll get back to you if it turns out I’m unable to massacre my way through the Summoning Place without a thrall to help me. 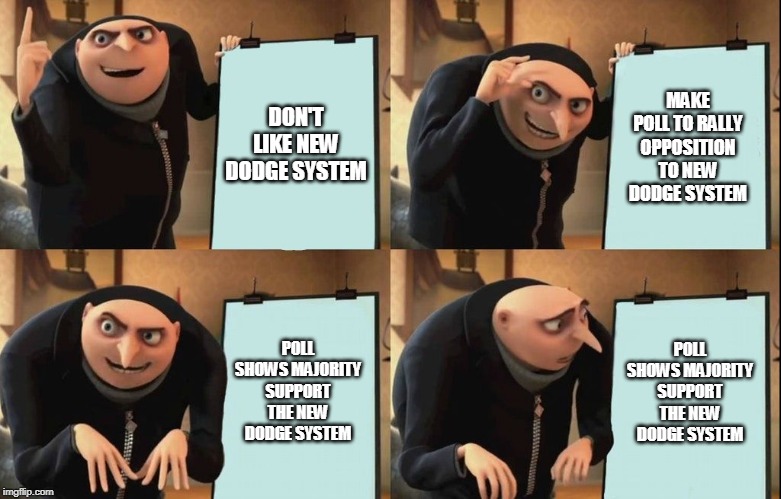 Sorry, i know it wasn’t just like that, i just had to

Maybe it’s just a guess, but using the old way of dodging may not be an option at all.

Player and horse movement has been redesigned so that they can work together - right?

And dodges are part of the movement system - right!

If the whole new movement system is based on momentum, then to use old dodges, you will have to remove everything related to momentum - including horses.

Simply copy-paste old code into the new system would result in strange situations:

Of course, you can try to create a similar dodge system associated with momentum (or adjust old one), but it will only be similar to the old one - it certainly won’t be 100% the same.

I voted for YES because:

The only thing I don’t like is the speed

, the rolls should really be a little faster

- or there should be a bigger difference between a player with zero and maximum agility.

I just registered on the forum to express my concern as someone who has been experiencing Conan Exiles as a single player game for the last eight months, and hopes to continue to do so.

My impression is that this change will make the game a lot harder, possibly to the extent of being game-breaking in places. I hope Funcom have not forgotten that Conan Exiles is not only a multiplayer game, and have managed this change in such a way to keep the single player campaign balanced and viable.

Reading this thread I saw that a lot of the people playing single player like the dodge roll because it is enabling them to handle bosses and entire NPC camps solo.

So I am gonna give my unpopular opinion on this again:
I don’t think it was ever intended like this. Isn’t a world boss like a raidboss in MMOs? Nothing that you should be able to take on solo or with the help of a thrall alone. I see nothing wron in adjusting the difficulty here.
I also feel that equipment should be a hard threshold when coping with certain dangers. One of the core elements of this game is gatherin and crafting. Doing this to get proper equipment should be mandatory for farming dungeons and higher mobs. Again nothing wrong with adjusting the difficulty here.

If you prefer to play singleplayer you can adjust the difficulty on the server settings. If you play on an official server, the game should somewhat force you to team up for certain PvE challenes.

I voted yes but I don’t think it’ll really affect my playstyle… it might in niche situations.

Maybe I can start using rolls in heavy. Will be fun to experiment.

I work without rolls… I just hit V, swing my mouse and swap to daggers and I move looking backwards via backflips like a tumbling gymnast for a lot of the time… even when travelling across the map.

Then I backflip at my enemy, swap to axe and continue my axe spinning.

remains to be seen

I saw that a lot of the people playing single player like the dodge roll because it is enabling them to handle bosses and entire NPC camps solo.

Developers know this and have not forgotten about singleplayer players.

I remember that during the stream they said something about adjusting the bosses to be able to fight them with the new dodging system.

He also briefly describing tweaking some of the boss battles to accommodate the new dodge mechanics.

I can’t wait to see what they changed and where.

Hmm, it’s hard to say. I did note vote since I wanna test it myself first. However I will say based off of what we’ve been shown so far I can see why a large majority is against it. I’m single player light armor 99% of the time as I prefer the avoidance of damage rather than taking the abuse and it looks like it really shortened the bridge between light and heavy armor but again… I just gotta test it myself and see.

One thing I will say is I don’t want to see X number of points into agility just to make it a reasonable dodge. I like 20 agility anyway but for a lot of players I see the frustration.

Like I said in my post I will try it as soon as it’s avaliable; I alternate between live and testlive anyway. If it’s good fun to use and adaptable to, excellent. If it messes with my enjoyment I’ll see what I can mitigate through settings (if I have to) or a change of gear and tactics.

I’ve done the loooooong fights where necessary and I’m not afraid to earn my kills, but a good dodge is part of what stopped me being a three hit KO…

I don’t think it was ever intended like this. Isn’t a world boss like a raidboss in MMOs? Nothing that you should be able to take on solo or with the help of a thrall alone.

Of course it was intended. The fact that Single Player mode exists mandates that everything in the game be viable for a solo player.

If you prefer to play singleplayer you can adjust the difficulty on the server settings.

Requiring players to choose and change the rules mid-game is very bad game design. At best, it will make players feel like they’re having to cheat to get through it.

Developers know this and have not forgotten about singleplayer players.

I remember that during the stream they said something about adjusting the bosses to be able to fight them with the new dodging system.

I hope you’re right, but I fear this change is going to affect the difficulty of more than just the bosses.

But you do realise that this is putting the game off balance again because groups have it very easy to farm worldboss keys then?

I’m not opposed to fixing existing issues, but it doesn’t really make sense to fix one thing by breaking something else.

Well thats why I pointed out that you can adjust the settings for singleplayer. You can’t do that playing on a server with multiple players. So I think thats a good compromise on the issue.

Too early to say how it will perform BUT seeing how it looks and acts i think its a good direction for the overall improvement of the combat system.

Let’s agree to disagree, here. We’ve both made our points.

Changing things in the game that already work just fine as they are known to do makes little sense to me. It seems a waste of resources. Why, after all, make changes when there are so many bugs? The new changes may or may not make things worse.

This is really important stuff. If you’re gonna run polls like this, I’d strongly recommend polling on Steam and, perhaps, other sites to get a better look at what people want. (if you haven’t already)

Polling on Funcom’s forum alone won’t give the devs a look at the bigger picture, only shows the wants of the most stalwart of the fan base, and could ultimately be damaging…i.e. drive away more players.

Doesn’t, after all, Funcom want to draw players who have stepped away back into the fold and not drive away more?

Yea. This sums up how I look at it.

This may surprise you, but this change isnt exactly popular with a lot of the PvP player base you are claiming to represent either.

Exactly. You totally got me here Croms

We should not be discarding a fully functional, tried and tested system

That looks even weirder than what they showed in the previous stream.

But you do realise that this is putting the game off balance again because groups have it very easy to farm worldboss keys then?

And solos wont stand a chance against them. Exactly.

Yes it is and it will be even more in december.

@Funcom_Community: Don’t just change the core game because that will drive many players (incuding most of my mates and probably me) away.
#Ifitaintbrokedontfixit

Oh and btw @Croms_Faithful: I was about to make such a poll before I noticed yours