Question of the Week: What recipes would you add using the foods/materials in game? 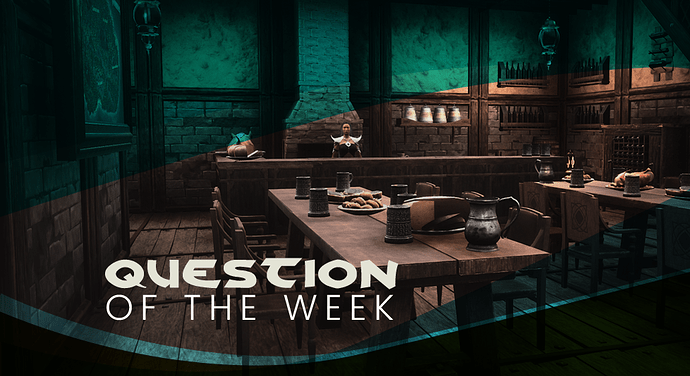 Anything can be food in the Exiled Lands if you’re brave enough. But with the help of plentiful animals, berries, fibers, seasoning and the like, it can sure taste a hell of a lot better. Foods such as cooked fish and pork, eggs, bread, and haunch currently exist in game.

But what would you add to the food list using the resources in game? Would you make it a simple but delectable dish of one or two ingredients, or would you go the “meaty mashup” route and put together what you can to make a meal fit for a king?

Take seeds, a half-filled waterskin and cloth trousers (worn). Toss in a century egg for aroma. Roast in the furnace to make “Everlasting Trail Brew”, the kind of drink that will always be there to remind you you aren’t really thirsty enough yet. A bit like Dwarf Bread

Adapted from wot I posted in @Zeb 's food thread

A placeable “meat feast” that functions like a well, except for food/hunger.

Perhaps give it an inventory, one that (when full) displays a more bountiful feast, and when less full, a more meager one.

I know we don’t have a lot of vegetables, nuts, and fruits in the game, but those would be nice to add.

Probably not too far off from real hot dog meat lol.

using the resources in game?

Awwh…I was going to suggest some fruit infused dishes such as pies, which would require us to add in some Fruit Trees.

But since we are only using current ingredients, may I please suggest some ‘Mystery Meat Pie’?

Pancakes! Really bad ones, but pancakes from … stuff.

There could be another learnt recipe that does berserker rage. Maybe Berserker feast and it should be very costly maybe even add in some corruption so you need to use a heart of the hero or see a dancer shortly after.

I was wondering, unappetizing fish and we don’t make it soup? Fish soups must be in the game and restore the same or more health than aloe.
2nd salads, maybe we don’t have veggies, but we have aloe, berries and fiber, a green dish.
3rd sandwich, we have bread, we have dry meat or dry fish, we gave greens and we have ketchup (blood - black blood your pick)

Using foods and items already in the game?

Why there is entire lists I’d like seen being offered just using what currently in the game.

Got ash? Water/ice? Plant fibers? Could make a Gladiator’s Drink.

We already have berries and seeds. Why not a trail mix?

We already have plant fibers, berries, Seeds, why not a simple salad?

We have eggs, we have bread, why not some desserts with some berries? Can make a whole variety of desserts.

Can make seeded bread, with breads and seeds.

Can make jam from berries.

Pickling, with alcohol for example. Or jugging.
And with items like planters, burial could be made possible.

Could have a whole variety of foods items being added through pickling, pickled eggs for one. Meats. Different variety.

Jugging would require the use of the earthen pots, (like the ones used for bombs) and sewing the meat. Sometimes with alcohol or even its own blood, (could throw in some demon blood in the mix to make things spicy.)

Burial is another food preservation technique that people used to store food in salty or dry earth. Sometimes frozen earth, so could add some ice or black ice there.

Then you can really go for some really weird drinks, (do yourself a favor And skip the next section if your squeamish.)

A lot of times many of us have pet thralls that die and we harvest their corpses.
Some cultures made drinks, alcoholic ones, from their animals. An infusion of their “essence” to impart on to the drinker, there are variations of this from all over, research “Snake Wine”, or you know - don’t.

One of those, “I will never try that, ever.” Kind of drinks is dung alcohol. Some cultures do it, and a few years ago - there was a trend doing it in a lot of breweries. But hey, we have dung in the game. [/spoiler]

I had to do a lot of research back in the day for my degree into alcohol. It lead to some very weird places.

But personally, I’d love to see that gladiator drink. But I’d also love to see other ideas mentioned here in this thread made into the game also - other people had some great ideas!

Hello everyone! I would have a special bakery feat to unlock, that would enable you to bake cakes on the best stove. Cakes that would increase temporarily an attribute! Ex- grind aloe seeds to aloe flour, put it in a iron bowl, add flask of water, salt, eggs, grinded plant fiber sugar, a bit of leavening agent grinded seeds, and cook it in the stove! A 5 min lasting cake

that increases survival by 100 points!

Yes! Bakery! And then Bagoras is needed to get special recipes like tarts and stuff. The game is literally unplayable till this happens!

Yes cakes would be amazing! Having a huge selection with all kinds of cakes like Cheesecake, chocolate cake, Donauwelle, Bienenstich, Pavlov, carrot cake and many more! The new ingredients should be farmable as well and grow in the different areas of the map and taming cows for milk should be possible.
Also I would love to have all food items as Placeables, that would make decorating really cool so you could make a big feast in your home (or a small one if you don’t have enough).

If it comes to displayable food, every true professional barbarian needs a roast on a spit. And a thrall, who turns it ! I mean whole boars or gazelles !
By the way, the large campfire would be already perfect for that purpose !

I would add vines that bear grapes and fruit

Note: Some of my Thrall are vegan.
… They can’t stand eating Gruel anymore!

it’s telling that no one has requested pineapple pizza… I know, I know the rules said “using resources in game” but we all know that people ignore those dictates… no one wants it. gross.