again farming for 2 weeks… again raided with glitches, hacks… again the protection was on, again anti climbing fences still remain not exploded, again jumped to my roof from a tower with a glitch. conclusion everything gone. official pvp…
see you all…
https://steamcommunity.com/profiles/76561198022463457/screenshots

Well, atleast there is a live case study of how NOT to implement PvP, whenever someone in another game calls for “better PvP”.

@Tascha How is this nerd-poling-attack still a thing?!?!?

I beleive i saw on testlive patch notes the Fall dmg from Agi perk got fixed so players can’t survive insane heights anymore, right ? Can someone on testlive confirm this ?

“ * Fixed a bug where the Cat-like perk would cause the maximum amount of damage taken from falling be equal to half of the character’s health points, instead of half of the damage appropriate to height of the fall. “

Wow, this is really going to change the raiding meta.

there is no “height” at that glitch, i made the macro and tried (after spending hours) just to understand where to make claims far enough from the base, when they build tower with doorframe, its a horizontal jump to my roof, related something with wield and roll… if dev’s dont know i can give the macro them too

what is a longest jump for an exile? 5 foundations? so kill the character if it jumps 6… or kill WHO touches the inner bubble…

really makes upset after all that effort…

protection on, fences remains to avoid climb, but i dont have my worker thralls, greater sabretooths panters, vathis’s, archers, vault, t3 altar, 2 archpriests, tons of stuff at vault, armors pot, elixirs, legendary weapons… there has to be a guilty here.
i interrupted my sleep at nights to find thralls to make them ready before raid times…

Dev’s just answer me WHO is guilty?

ok just because i love this game, i’ll go and try the jump to see if its fixed at testlive.

Your’re not alone on this Aspenza, my clan and almost everyone that has tower bases experiencied this at least once, I confess I raided this way using the fall dmg perk, it is ridiculous being immune to death falling from any height.

I really don’t know why they haven’t fixed this before as it is a major bug that affect PvP gameplay.

Do the test on testlive and comeback to tell us if its fixed please, I hope it is.

By his own report its not fixed because it’s not height related. Submit a exploit hunters report to Funcom.

I know, but you gotta have the Agi fall dmg perk to work ( I think), if its fixed as described on testlive patch notes, this move for raiding won’t work since you still get dmg even with long horizontal jumps, it counts as you were falling from above, at least is what I saw doing it with the 1h sword from not so tall cliffs.

Either way, its valid showing the macro for devs to know about this, if can be done even without the Agi perk, so they fix it.

I see no landclaim there.
They probably used a tower and reduced fall damage to raid you?

Not to mention a clan might have gotten in by climbing on top of each other with the highest one then being able to jump on the other side -> if the elevator was up then, raiding you has been easy as well.

I didnt know how exactly that glitch worked though. That it was limited to loosing 50% of ones HP instead of 50% of falling damage…
IMO using macros in such a game is the same as cheating, but well… It DOES explain how some people can attack as fast as they do without tiring their hands…

More time to… uhm I think I wont write it, hehe.

I feel like a good fix for this is to allow altars, or another similar block to provide offline protection. Something that kicks in 5-10 minute (server setting) after the last clanmate logs off.

Offline raiding seems to bring out all the glitches and exploits (since no one who’s defending is seeing them). And would be harder to pull off against active defenders.

for no landclaim, please have a look at this photo… sorry for bad angle…
before getting raided; every 1 foundation of 3 was t3, i dont count t3 fence foundation upgrades and vaults

from the edge of the main building, every side has at least 20 foundations wide going outer… 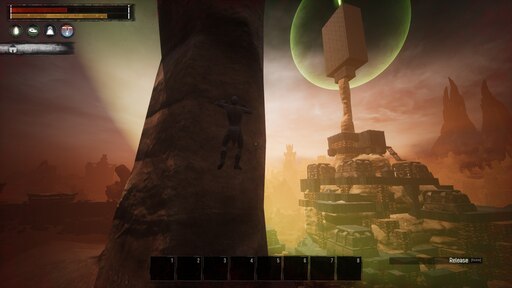 Bad sight on that one. No way to show from up above?
Looks like the landclaim on that was is limited to directly below the finger?

Okay. Your screenshots show plenty different bases, and I thought you meant the one on top of the middle ruin of that bridge.
There is a second screenshot from above showing landclaim on that other stuff.
Hmm.
There is a gap in that landclaim though…
I dont mean toward the second finger, I mean down at the base if you would draw a line going from that finger between the hole to the maproom recipe and mitra teacher. In that direction. Looks like something has been blowed up there? Or am I totally wrong? Because otherwise I have absolutely no clue.
Though I dont know (not to mention I dont use) exploits or how they work.
…
Are you sure about that not having been an inside job?

By the way. My honest opinion is that using vaults for landclaim is a nasty trick. It’s not as bad at it was with 500k HP now, but still. People who wanted to use instead of misuse them cant use them anymore due to the low HP (building a fortified storeroom or hiding a stash away makes much more sense now…)

Offline raiding seems to bring out all the glitches and exploits (since no one who’s defending is seeing them). And would be harder to pull off against active defenders.

True. I agree on there being a need for offline protection. Some people fear it’s going to be exploited by the defending party - but there would be a good solution for that too.
In exchange for an offline raid immunity, the raid times might be up 24/7. Players will only be raidable when online - but then again raidable at any time when they are online.

Maybe taking deleting names from the eventlog is a good idea then. But I am not too certain about that…

at level 11 and with 300 HP it is an only 9 foundation fall damage that didnt kill me. i made better jumps but was just trying not recording, think how this thing made me angry so its my first recorded video…

“ * Fixed a bug where the Cat-like perk would cause the maximum amount of damage taken from falling be equal to half of the character’s health points, instead of half of the damage appropriate to height of the fall. “

Damn, so it can be done without the perk, you can test in singleplayer on testlive aswell. I wonder if the perk still makes you survive insane vertical falls yet. I would test myself, but Im away from my PC and will only get to it on saturday.

That is a mighty good catch. Can you do us a favor and turn on the debugHUD so we can see how many server frames you’re getting? I am still getting a 16-block leap, average, and my internets are a potato.

i have no idea about debugHUD sorry, its official testlive server us1, as i wrote; i guess the answer is block leap and its 12 at video, but i did 16 while i was not recording.

at level 11 and with 300 HP it is an only 9 foundation fall damage that didnt kill me. i made better jumps but was just trying not recording

there is no “height” at that glitch, i made the macro and tried (after spending hours) just to understand where to make claims far enough from the base, when they build tower with doorframe, its a horizontal jump to my roof, related something with wield and roll… if dev’s dont know i can give the macro them too

Any information you can provide us with is helpful. Please DM me.