Crossposting from another thread as it may provide helpful information:

I run a private server, and I got this notification on my g-portal dashboard yesterday (7-31-19) afternoon

G-portal (The people who host all Conan Exiles servers) posted this notice yesterday afternoon:
“West Coast
Currently West Coast servers are experiencing issues with connecting and losing connection in the west coast. This is due to Issues with ISP’s And We are working with our datacenter to bypass these routes where possible, and resolve the issue. This is not a issue with the server, hardware or game, But with the internet in the region. While we can fix some issues/try to resolve some issues. alot of this is waiting until routes are restored and fixed.”

thanks! It mostly became a problem starting the 29th or so

…
So I tested some other servers I am not playing on.

Thank you for your work. That is really insightful!!

@somebigjerk, this is MOST insightful. Thank you for sharing this.

@Ignasi: Would it be possible for you, or someone from your team to follow up with g-portal, and get the full scoop on what’s happening with west coast servers? I know that the server I am struggling with (1742) is a west coast, PST server.

I expect that Funcom may have some better bargaining power to get the inside scoop on this issue. Posting a sticky to share the official comm from g-portal might be a good idea, also.

I don’t know what kind of business relation gportal and funcom have, but I am sure they are more likely to listen to funcom, than to players issuing tickets. If they could forward this issue to them, a lot of us would apperciate it.

We’ve got in touch with G-portal about this, will update this message once we hear back

Edit: G-Portal identified some connectivity issues and they’re currently looking into it.

Any update, have they been able to resolve the issue?

I hate to say it, Icey, but routing changes are not quick fixes. It technically is not g-portal’s issue (although they are looking into it). The problem is going to be with one of the major ISP carriers between you, and g-portal. G-portal’s hardware and data center do not tell your router where to go. But your router’s next hop does.

Somewhere along the line, some ISP made a routing change, and as a result, you are getting more latency trying to reach their servers. Somewhere, the IP space that is the g-portal servers is taking a “wrong turn at Albuquerque.”

These things are often not solved in a matter of hours, unfortunately. It can take days, and sometimes weeks to correct routing issues (all depending on the willingness of ISP carriers to assist).

It’s worth sharing that I, too, and very frustrated. I am just very glad that g-portal is aware of the issue, and that they have issued statements sharing that they are working to try and get it resolved.

It seems to be a consistent issue with this game over the last two years. Is the suggestion that all players experiencing this are on a common ISP and simply changing my ISP would fix this issue?

Or is it that simply most West Coast ISPs are using the same provided network to provide their services?

I hate to say it, but I don’t buy it. From the information I’ve gathered - this is happening to users across 3 or more ISP carriers. Unless you’re implying that all carriers changed their routing protocols in the same way, at the same time, and only on the west coast. And that all of this is only effecting conan exiles.

Comcast, Spectrum, AT&T… they provide access t the internet. They do not own the whole thing. If you do a tracert from your machine to your destination, there are a lot of other routers (“hops”) along the way. Your consumer ISP does not own those routers. They are owned by larger carriers (likely different from your consumer ISP), and are effectively the infrastructure of the internet. That is where the problem resides.

You don’t have to buy anything that I’m sharing here. I am merely trying to help everyone understand that this issue is unfortunate, and not really something that Funcom or g-portal can directly flip a switch to fix.

You’ve been having issues over the last two years? You may be having a different issue, then. Most of the threads that have cropped up in the forums this week have reported only having issues just for this week.

so you admit you were wrong…and you apologize for closing my thread ands saying there was no issue that it was something on my end?

No if you google “Pending Connection Failure Conan Exiles” you will see this has been an issue since 2017.

The other issue is that I have the ability to connect to the server for around 5-10 minutes before the issue recurs. Two nights ago I was able to play for an Hour and a Half before it occurred. I have people across the country on the same server experiencing the same issue. I can actually access the server just fine from my nephew’s xbox on his account with zero issues just not on my main account. 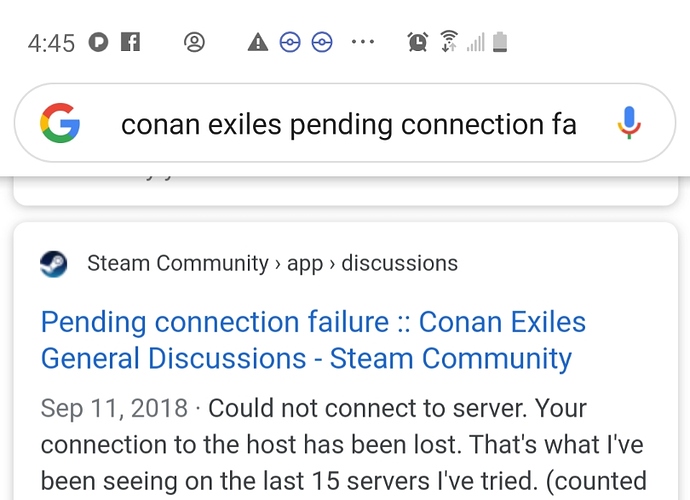 Guys, there is something going on that is being addressed by two companies and all the people who have experienced this over the past several days. Unfortunately, unless I have misunderstood, it probably involves yet another company. Under those circumstances two things are needed, proof and pressure, directly to that third company.

Funcom and G-Portal are doing that, inasmuch as they can, but it’s still up to the third company to acknowledge the problem and fix it. That circuitous route takes time. Not all of the above posts fit into that category, but for those that do, I sincerely hope a fix is imminent.

Cauthey described it best, and for most above, the problem is closer to G-Portal than the players, but still not in their domain. Both Funcom and G-portal want you to play without interruption.

As to “Pending Connection Failure", that is a very generic term and could describe a problem with your machine, your game software, any of the 15 or so routers in the line, G-Portal or the server software itself. Getting that message is like someone saying ‘I have a pain’. Could a doctor do anything with that?

To those of you who provided important details, kudos for trying to help solve the problem.

Again, I sincerely hope a fix is near !

I have been able to:

I know that most everyone on my server is experiencing this aside from a few newbies that started after 7/29 and 4 people who never seemed to be affected. I have been able to play at times for a very short amount of time and do everything normally, (5-10 minutes), before the server gets interrupted. 3 of my local friends have experienced the same issue and we all play on #2510 PST West Coast server with zero issues over the last few days. Do different servers have different routes even in the same facility and time zone? There is not enough evidence to support this as an ISP issue when we can play on other West Coast servers just fine and at times connect to our normal server as well. People on our server who are across the country are experiencing the same issues and can play other west coast servers just fine. It’s as if we have something that is in the game for people who have been playing on servers for a while that is breaking the loading process and not related to ISP issues. There has to be a break in the code or a glitch or something related to something relevant in the last 2 months. Newbies are not affected. I can play another character on the same server with a different xbox account as a fresh noobie on the same server on the same Xbox in the same house on the same connection with zero issues!

I reached out to G-portal support just now, and I was informed that the routing issues have been resolved
This is the message I received in response to my inquiry from BradF:

“Hello,
This issue was fixed earlier today, and We had no further reports of it. The issue was with a ISP called GTT and all our routes no longer are using them
Kind regards,
BradF”

EDIT: Second Update from Brad:
“But to give you a update, The issue was with a ISP called GTT, They where blocking/filitering packets, only allowing about 1/3 of all packets through. We spoke with them, and our Datcenter, and rerouted all routes via NTT, and that was roughly 4 or 5 hours ago, Since then we had many users test and so far no further issues.”

I would try to connect to your servers of choice again, and inform members of your communities (if you run servers) that they should attempt to re-join