Siptah is too bright at night

The Isle of Siptah nighttime cycle is way too bright, like in the dead of night on siptah it looks as if it is still daytime, Funcom can this be addressed?

As well as aggro ranges from mobs being insane? I walk into a camp and pull the entire camp at once. 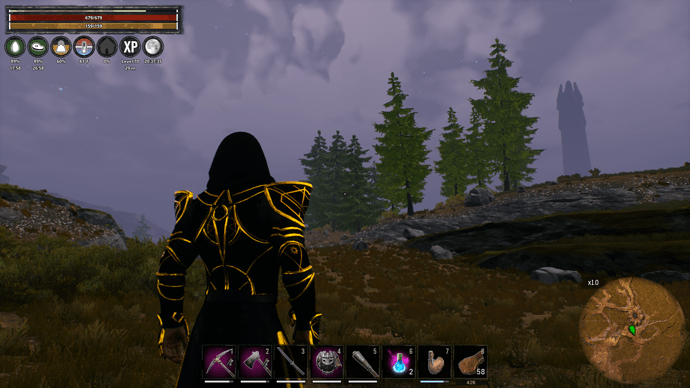 I agree 100%, but I have also seen a ton of players screaming (figuratively and literally) that it’s too dark (and too light). Siptah is still early-access so let’s watch this space for now.

Agreed about light 100%. About aggro in camps , havent tested yet the big ones, but its a tentative disagree as I think conan in general lacks challenge in pve, so abit more of it sounds good.

Siptah is perfect at night. It’s dark enough to be annoying, but at least you can get around. Exiled Lands is too dark at night. I don’t know why people enjoy not being able to do anything in a game. How about you turn your monitor off every 15 minutes if you need some darkness?

How about you turn your monitor off every 15 minutes if you need some darkness?

A good, reasonable solution would be an option for admins to adjust the lighting through an .ini file or server settings. Might be too much work though and probably won’t happen.

To me is just sucks that there are so many cool items and gear that offer night vision abilities and they are rendered useless on this map. The lighting on EL was one of my favourite aspects when I first started playing. People just have different preferences and it is apparent that the game does cater to that to some degree with the massive amount of customization you can do on a private server through sliders and modifiers.

Question : did you ever had to use a torch or potion of nightseeing at Siptah at night? If the answer is no, somethign is wrong and we are missing on some features of the game.

IT would have to be also a different slider for day and night. Cause the day is perfect as it is for me.

so many cool items and gear that offer night vision abilities

The dust, the night vision potions, the night stalker’s mask - these are all hateful. The visual effects are atrocious. The only good thing I can say about them is that they are better than not being able to see at all, but I much prefer Siptah nights where you can actually see. Is there even a way to end the night vision potion effect? It’s absolutely terrible when you use one of those potions then it becomes day and you’re just blinded until the potion wears off.

The night feels like a rainy day. We need more darkness.

Agreed, nights need to be darker. There is no sense of danger at all at night. Plus a lot of cool items and gear become useless without darkness. The night vision potion ( makes Jebbal Sag even more useless as a religion), the night vision bow ( makes a weapon recipe useless) and the night-stalkers mask ( also becomes useless ).

I use the bow for vaults, so I can see where the chests are. Also around the tower since the moonlight seems to get swallowed up by that black scorched earth there.

One thing I’ve been extremely impressed with was watching the redwood tree shadows, as the moon moves through the sky. Other than the speed of it, the realism was incredible. I’m considering expanding the day/night cycles to make it even more so.

I have a house on a lake, with loads of evergreen trees all around it and I love moon lit nights there. Just amazing to see. The game really captured that for me.

but I much prefer Siptah nights where you can actually see

you can also see at morning light, that does not mean night time should not exist.

there are torches, there are items that help you see at night, but as it is, well, for me its just better leave it all day, and imagine night does not exist. (there really is no night time, night time like in the EL dessert (sinkhole) it is night but you can still see in a descent way.

that does not mean night time should not exist

I’m frankly surprised that so many people are in support of night, but I will continue to voice my support against the dark nights of Exiled Lands and in favor of the brighter nights of Siptah. Dealing with night in Exiled Lands is a constant frustration that has no positive side and just detracts from gameplay. I play games for enjoyment and entertainment and for me not being able to see the game removes my enjoyment and entertainment.

So I will argue that yes, for many players night time should not exist (as it does in the Exiled Lands). It is just frustrating. If they add a client-side night setting to the game that would be perfect - you can enjoy not seeing anything all you like, and those of us who prefer to see the game we are playing can continue to do so.

I am happy that they made the storm brighter, but the night was fine the way it was. What I would hate is Isle of Siptah being as dark as the Exiled Lands.

the brighter nights of Siptah

there is NO such as “Nights in siptah”, there is NO nights as it is. nothing,… looks like more like an early dusk than late dusk or nights. you are playing a survival game, in fact i would also like to see more dangers coming out during night time.

check the nights at sinkhole, (that is perfect imho, you can still see but it is indeed nighttime and looks like it) very very different than the nights at the jungle biome or some cold areas in the north. in some instances is really hard to see anything, (with that i can agree) but having nights as you can see at the sinkhole or noob river is just perfect!

You’re surprised that in a survival game deemed savage and brutal in the world of Conan the Barbarian’s Hyboria, that the players would like to see a proper night cycle?

Dealing with night in Exiled Lands is a constant frustration that has no positive side and just detracts from gameplay.

Should say, "Dealing with night in Exiled Lands is a constant frustration that has no positive side and just detracts from MY gameplay.

I find it too bright as well. There is no point in having a torch most times, and the middle of the night is just dark enough to need one, but for too short a time to bother. I much preferred the challenge of the almost absolute darkness of the Exiled Lands.

I just pretend the Isle of Siptah is Summer in one of the far Northern Nordic cities - perhaps one of the Devs wants the rest of us to share in night sans the dark?

- or it’s something to add before Siptah moves out of early-access?

I also suspect there would also be a flat out 18+ player rule to players in countries that don’t want their kiddies to have nightmares - Maelstrom monsters in pitch dark could cause a mild night-sweat to the unwary?