What is the easiest way to update mods in steam since either the game or steam does not recognize that you have the latest mod version installed when trying to join a server? I have been trying to play for over two hours now and it will not recognize that I have the correct version. I have tried basically everything short of reinstalling the game. Which I already had to do last week. I really don’t get how it doesn’t recognize the versions.
This is happening every time a mod updates.

Are you sure that the problem is with you and not the server? If you unsub and re-sub this usually initiates a new download.

Are you playing on your own server, or someone else’s? If it’s the latter you’re going to have to wait for the mod owner to update things on their end so the versions match, since the server mods don’t download and update automatically. Understandably, that makes it a bit difficult to estimate how long it would take.

If it’s your server and you’ve already done that I imagine it would depend on how good your host is. Back when I used Survival Servers my server was constantly throwing errors and not updating its mods correctly until I submitted a support ticket, whereas my AGS server has been pretty dependable so far. (Survival Servers is garbage, nobody should use them.)

Just to understand better: you try to log to your server and you get mod mismatch. One of the mods gets wrong version status. The version number you see in the right column matches the newest version of the mod and you are subscribed to it?

Remove the out of date mod.

I do this all the time and let the modder know.

Once i see a mod update- then i reinstall and try again.

Still doesnt work? the mod stays off my server.

The mod itself is up to date in both steam and on my server. It’s just for whatever reason not being recognized in game that I have the correct version in steam.
I did end up removing it from the server until I can figure out what’s going on.
However it is now happening with each mod anytime they are updated. So I may just have to have a vanilla server for a while until I can sort it out

Which I assumed meant that the game isn’t recognizing that I have the correct version subbed in steam.

I have tried deleting the mod folder.
Unsubbing, repairing game files and then resubbing

I really don’t want to have to reinstall the game.

But i spent so much time trying to fix that it might have been faster to try and do that.

I’ve even unsubbed from all mods deleted all of the folders repaired files and it still gets the same result.

I ended up just taking the mod in question off the server. Which I don’t consider a fix. But at least I should be able to play tonight…

Ok, so. One of the mods just dropped an update. My server is not updated, my client is updated. This is what I see:

Stacksize Plus v1.7.8 (DLC compatible) is the correct version. 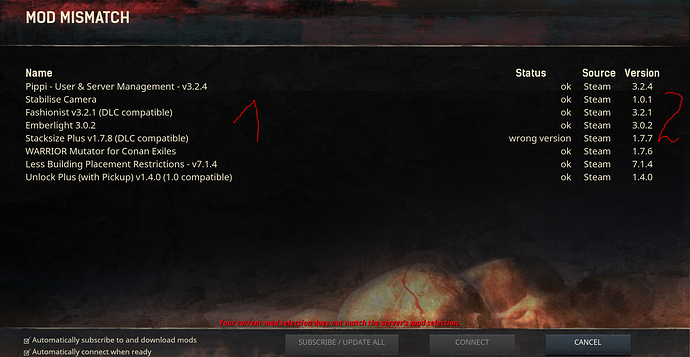 No. 2 is the server. So if you see the wrong version on the right side, the problem is in the server not in your client. The server needs to be updated and restarted.

Ahh ok I was thinking it was client side the whole time!
I’m going to look at a different sever host then. Because when I go to look at the mods on it they say they are all up to date. And restarting / repairing it does nothing.

I appreciate all of your guys help!

If you have access to FTP you could also manually update the problematic mod by uploading your .pak file to the server. Just out of curiosity, is your host g-portal?

Dang, I feel dumb. I’ve been playing single player on Steam for a year and never thought about mods. I’m gonna have to check this out.

Yes it’s g portal. Have had nothing but issues with mods. But everything else seems to work fine.
I’m going to open (another) ticket on it. But their response is always to just restart it.

There is a lot of really cool mods. I personally can’t play without a ui or stack size mod haha

G-portal uses a weird cache thing with mods. So if a mod author, like me, updates our mod, Gportal doesn’t notice for up to 12 hours. Like you can force it to restart, redownload the mod and everything, and they will use their cache, rather then access the Steam servers. Gives mod authors huge headaches trying to explain that every update we do.

Hence why I always recommend FTP.