Teleporting of defensive archers - intended or a bug?

After the current patch there is no set of stances / adjustments available to set thralls (archers particularly) for base defense so that they a) do engage foes and b) do not teleport.

Before the patch players used to postion archers on buildings or building pieces (like pillars) to keep them out of the range of melee fighters. This strategy seems to be invalid now for the reason of teleporting.

Lots of players tried to verify this or figure out a workaround but nothing seems to work.
So please, tell us if this behaviour is intended or a bug so we can adapt!
Thanks.

Hello guys, I have issues with archers after the latest AI rework, The archers get teleported on the ground from their archer towers and they start to chase NPC around our base through the gates, The settings i am using is Stand and defende, attack range 50m, chase distance 5m, Anyone has a similar problem or i am just using the AI setting wrong? Edit: After messing around with the building structure it seems that when you place them on anything that is not foundation they will get teleported …

Thralls walking through walls and doors and being killed PC Discussion

Game mode: Official Type of issue: Bug Server type: PVP Region: American I had three leveled dalensia (not a quick task) that were killed in a matter of minutes when a clan took advantage of a bug where thralls now walk through walls and doors since this latest thrall update. [image] Please provide a step-by-step process of how the bug can be reproduced. The more details you provide us with the easier it will be for us to find and fix the bug: 1.Three dalensia thralls in guard mode wer…

7 Likes
Now that Thralls are getting nerfed...IMPROVE base defense abilities!
Teleporting of defensive archers
Thralls walking through walls and doors and being killed
The new thrall behavior wheel!
Archers behaviour settings/bug?
heaventhere May 22, 2020, 3:53pm #2

Are you waiting on Funcom to answer this?? I wish you so much luck!!

Also, if you manage to break their line of sight after they have engaged you and remain out of sight, they just start “running on the spot” once they are running, they dont seem to regain aggro. Even after shooting them, they just run forever or until a structure near them is removed

sounds like to me there not utilizing the “Behavior” system correctly stand and defend or prioritize Ranged would stop this would it not?

I myself have not tried this but I have defensive archers they haven’t moved and still attack.

You can read detailed reports and watch videos about how different setups have been tried out by different persons in the linked threads. I made this one as a sort of conclusion solely and to formulate a precise question to answer for the team.

Update:
Actual testing is evidence to suggest that the “stand and defend” option now works as it should have from the beginning.

From my testing, archers set to “stand and defend” do not teleport from their elevated positions to the ground any more even when the line of sight is beeing interrupted. This does not work with towers made from the footprint of a single pillar or wedge. It only worked for me with the towers having at least the footprint the size of a square foundation.

It only worked for me with the towers having at least the footprint the size of a square foundation.

So it is still bugged. Or what has the size todo with porting around?

Great to see thrall AI fixes, before thrall nerfing…
Oh,nevermind. Its Funcom. They have no clue what they are doing…

FWIW, I was having the same issue with the archers. It seems that the priority setting is not quite working the way you would expect it to, if the guard archers have a melee weapon in their inventory along with a bow. Now that I have removed their melee weapons and gave them bows only, they are staying put.

See my videos in the other thread… They only have 1 bow + arrows in inventory. Maybe I show it in the next test-clip.

It happens to all thralls including melees inside houses. Having a clear path up/down does not fix it either.
It seems it is an issue when they lose line of sight to the target. Also, one of my outer melee guards that is set to chase 50 went down to rotbranch assisting me fighting it, got knocked down and stayed put there assuming its new guard position right on the rotbranch spawn instead of the front of my house. That was 50m away from its actuall guard spot!

Each time when I am logging in, I am starting my game with picking up my archers from the ground and putting them back on their spots. Quite annoying to be fair. After a bad experience of losing my thralls to a bug by which they ended up in the undermesh, I’ve stripped them off their armor to not losing any more.Have we got an answer? Is it intended or not? If so, I will rid out of them, then.

That this issue has made archer-based boss kill pits inoperable is an annoyance since those are merely a luxury/convenience anyway. However, in terms of base defense vs botched purge spawns this is a major headache.

I’ve actually had to block the hostile animal spawns around my tavern at the Sinkhole because every time one of the undead hyenas would get close, the archers and pets stationed on the roof would teleport to or thru the ground. In fact, on a few occasions I’ve found the hyenas in the foundations under the tavern or on the meshes under the sand! Even worse, some of the panthers on the roof (set to defend against purges teleporting up there) teleported thru onto structures under the mesh, in one I had one fall entirely thru the world to where even as admin I couldn’t rescue it.

From where I’m sitting, this is currently the most alarming bug in the game right now right alongside purges teleporting thru walls into the interior and atop the roofs of bases that had never experienced such issues in the past. 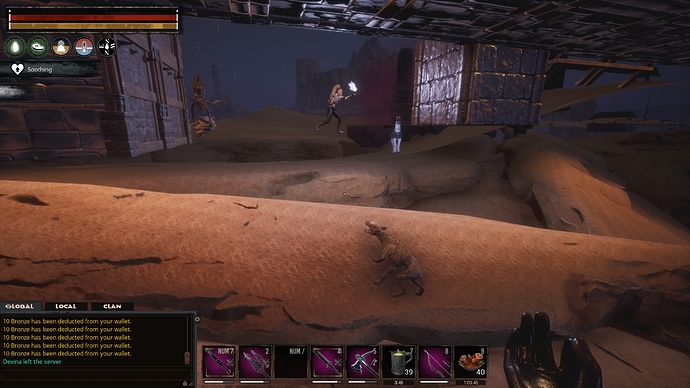 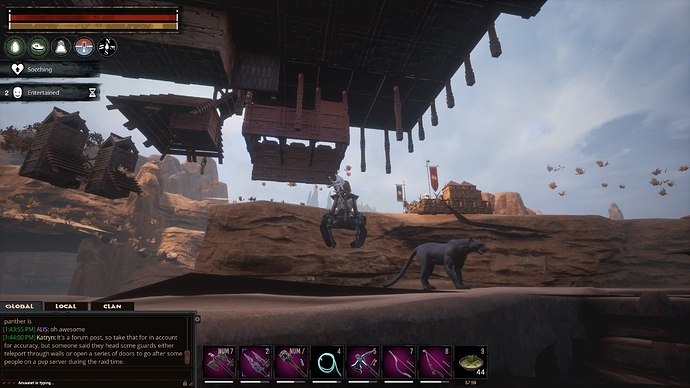 It seems it is an issue when they lose line of sight to the target.

There was another (newer) discussion with more propositions here (maybe it helps):

Sorry if this allready has come up somewhere. I did a search but found only old posts so… I’m trying to set up a defended wall with archers only. And I want the archers to stand put and fire theire arrows. I tried all kinds of combos on the behavior wheel, but they only chase after the target, or sometimes even ignore the enemy all together and just stand there like idiots. So I’m wondering, since clearly I do something wrong here, how should I set up the behavior to get it to work as I want i…

That is behaviour-tactics-stand and defend. Unfortunately that does not help with the curren AI issue of thralls teleporting either.

Sorry AlexisX I am not sure if I understand correctly. Can you elaborate please?

That this issue has made archer-based boss kill pits inoperable is an annoyance since those are merely a luxury/convenience anyway. However, in terms of base defense vs botched purge spawns this is a major headache.

I am sorry that it is not working for you. I will post my settings once more in the next post because for me it is indeed working without teleporting to the ground.

Or what has the size todo with porting around?

Since we are talking about the size of the platform the archer is placed on, I can imagine that in the first place it might be indended to not have archers on pillars, because it looks odd. And then, in terms of game mechanics, it sounds quite logical that the archer has problems with the pathfinding on top of the pillar or a triangle, because it might simply need a minimum of space to reposition. I saw that you are still posting your setup with an archer on a triangle. Why don´t you just try out a new proposition? That´s where I fall short of understanding…

I can imagine that in the first place it might be indended to not have archers on pillars, because it looks odd

Thats without doubt the strangest argumentation I have ever hear of… “it looks odd”? So archers in medival times where not on towers/castles, but on the battlefield/ground? o_O
It also looks odd, if the archer is running on the same spot

Many things are looking odd in this game

I saw that you are still posting your setup with an archer on a triangle. Why don´t you just try out a new proposition? That´s where I fall short of understanding…

The archer doesnt port around, if I remove the door behind it…

But thats the point. The archer should be UNREACHABLE without climbing/destroying the door. Like what would you expect from archers protecting buildings.

I am currently at my way home. But I have rather many things to test tonight… Also have to test some Drone stablity issues.

But I will try it with my normal setup, but with “stand and defend”.

And then I will try to add some ceiling pieces, to see if it makes a difference. But probably not within the next 4 hours.

I did not say that an archer looks odd on a tower but on a “pillar” where I was referring to a building piece with same name. Well if that is the strangest argumentation you have ever heard of then I consider you a very lucky guy…