Thralls walking through walls and doors and being killed

I had three leveled dalensia (not a quick task) that were killed in a matter of minutes when a clan took advantage of a bug where thralls now walk through walls and doors since this latest thrall update.

1.Three dalensia thralls in guard mode were in a fully enclosed T3 building and were showing on the event log as dying in quick succession with zero damage to building/structures. There was nothing in the log with the exception of the three thrall deaths.
2. The clan that killed the dalensia stated that when they went near the building, the thralls simply walked right through the doors (there were multiple doors) and came out of the building.
3.I had not changed any of the follower details after the patch so this resulted with whatever the ‘default’ setting is for thralls.
4. Later that same evening, I found several thralls outside of another base killing a snake.

Regardless of whatever the default thrall setting is or what thrall setting someone uses, thralls should NOT be walking through doors and walls when placed on guard. This bug should be fixed quickly as there will be clans exploiting this issue and killing thralls that people shelter behind defensive bases.

3 Likes
Thralls move after server reboot/are not at the same position anymore
The new thrall behavior wheel!
Archers behaviour settings/bug?
Teleporting of defensive archers - intended or a bug?
Multigun May 9, 2020, 4:41am #2

i forget if the old style was , if you had a door closed they would not walk through it?
does the new commands bypass closed doors now?
would that work in reverse also ?, like someone that has a thrall and has the behavior to attack anything , would their thrall walk through the doors to attack?

Again, the default setting (have we even been told what this is?) was on and since when do guarding thralls walk through walls and doors when not on follow??? I will tell you when, since this screwed up thrall patch.

Are you actually suggesting that if you have a thrall on guard inside a base that it will now walk through doors and walls and this is intended? If so, sounds like an asinine change.

And yes, I understand that thralls have stances, are you implying that I need to set all my thralls to ‘attack nothing’ rendering this part of my base defenses useless should someone actually raid the building and get in?

If your ‘guess’ is that I need to set each thrall to guard the area and a minimum of 5 yards, are you going to guarantee me that the thrall will not go through a wall or door? lol

Could someone from Funcom please respond that this is intended???

I’m experiencing a similar things with my archers in that they can’t sit still. If I put them on edges or on top of pillars they will jump off.
It would be nice if the Guard command actually made them NOT move from their spot. But they move anyway.
Pre-patch I never had a problem with the thralls flinging themselves off an edge like a lemming.

My archers are being tricksy. Looked at my pillars and saw a pile of missing archers, gathered up the ones on the ground and still had three missing. Could not find them for the life of me until I looked up and found them on top of the awnings above the walls!

This goes beyond thralls walking thru doors. I keep finding archers and pets that I’ve placed on rooftops (for purge defense) indoors, or even under the mesh.

For example, here’s how I have these defender at Sinkhole setup: 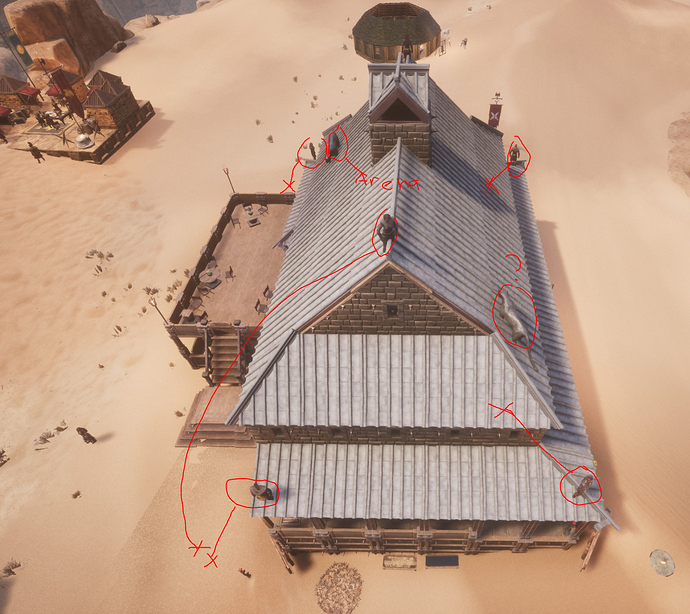 Additionally, at one of my kill pits on the opposite side of the map, archers kept teleporting off their pillars to the ground. I tried replacing the pillars with wedges which worked for a while, but they continuously backpedal, and eventually end up on the ground regardless. To the best of my memory, they were set to Attack All at range 3 or 4, with Chase at 1, and set to Prioritize Ranged.

As a further note, the difficulty in asking player what they have thralls set to, is that there is no visual indicator of what orders any given thrall is trying to follow. It would be helpful if the relevant icons were displayed on their health bar (once it becomes visible again), and it would be even more beneficial if their current commands were outlined in the radial menu.

EDIT: A second video, this time with the archers set to Guard Area. Same results. Seemingly as soon as I draw the Scorpion King out of line-of sight, the archers all dismount their positions.

Same problem here, but the enemy have an instant regen too, so they are invulnerable.

Additionally, at one of my kill pits on the opposite side of the map, archers kept teleporting off their pillars to the ground. I tried replacing the pillars with wedges which worked for a while, but they continuously backpedal, and eventually end up on the ground regardless. To the best of my memory, they were set to Attack All at range 3 or 4, with Chase at 1, and set to Prioritize Ranged.

I would think that prioritizing ranged would help with limiting movement. I am curious, have you tried removing any melee weapon?

They have only ranged weapons, no melee weapons in inventory whatsoever.

After a couple more tests, I’ve observed that once they get off their perches, they just keep backing-up forever as they are pursued. This will result in whatever thrall is being attacked ending well out of attack range of their companions and getting killed without player intervention. Furthermore if a boss like the Scorpion King knocks them far away, they seem to regard wherever they stop moving at as their new guard position.

In short, archers set to guard are nothing but a liability right now, I’m going to have to disable their AI lest they get themselves killed.

This is on live, new since this week’s patch.

So for archer thralls ON BASE DEFENSE you have to chose “stand and defend”, not “prioritize melee” (or archery). Then they will not leave the position.

Stand and defend
With this option, your followers will stay firm and keep the designated position against any hostile activity.

Prioritize melee
Followers with this tactic assigned will try to deal with enemies up-close and prioritize equipping the shortest range weapon they have available in their inventory.

Prioritize ranged
This tactic will make your thrall opt for long-ranged engagements, prioritizing ranged weapons in their inventory when attacking an enemy.

Unfortunately my archers were on Stand and Defend and were still repeatedly ending up on the ground. At this point I have conceded defeat and brought them all inside the base and switched off the purge for now.

So for archer thralls ON BASE DEFENSE you have to chose “stand and defend”, not “prioritize melee” (or archery). Then they will not leave the position.

I just gave that a try. Set them to Stand and Defend and Guard Area, and it was pretty much the same result.

It was worth a shot though…

That would also explain my archers behavior and one of them killed herself… So they spawn correct, but are doing strange things…

Game mode: [Online] Problem: [Bug] Region: [EU] It looks like thralls are not exactly at the same place after server reboot. Steps on how to reproduce issue: Was running to one of my outpost, which has 3 archers on triangle ceiling pieces See that 2 of them are at ground and one is way behind - so no one was at the place before. I will upload a screenshot and will go check my other 2 outposts where I have archers positioned like that. Screenshot and view from side. Archer was on top of…

Seeing the strange UI color bug and now this, it kinda feels like that testlive and live are not the same patch… For what even have testlive then

Sounds like they were doing as they were told, engaging nearby enemies.

No. He didn’t tell them to go through closed doors. That’s the problem.

Today I had the same issue. A thrall was able to run through a closed door and tried to go into close comab with an enemy.
I also noticed that thralls are jumping from walls again even if you have told them to stay and guard the area. It was an acher, so there was no reason to jump from the wall because the enemy was in range to use the bow (which he was told to do).

Yeah, Funcom should provide us with a few days after fixing this issue to get all our thralls back out of stranded position(textures, undermesh, ext.) without losing items and gear on them. Because it is not our fault that some of them ended up that way and some even worse - dead

At least salvage what can be salvaged.