Telith ghost on the island?

I noticed that in the jorney step, I was supposed to meet Telith ghost:

In the north, men speak of ghosts in quiet whispers. Perhaps because they are surrounded by them – the armor-clad undead of the Silent Legion, the flickering Wights that haunt the mounds of the dead or the other, more regular ghosts that you have seen all across the Exiled Lands.The latter are more like memories than ghosts, spectral messages embedded in the universe for thousands of years. Apparently one of these ghosts haunts the Sanctuary Ruins – and has information about the Kinscourge. For those who are willing to listen.

Later on, the jorney says I’ve met a ghost. I decided to check if there WAS a ghost, and yes, it was.

“Telith’s ghost was definitely present after the game went live. Multiple players on an official PvE server were able to interact with her (including myself) back in August 2018. I’m sure Devs can confirm.” 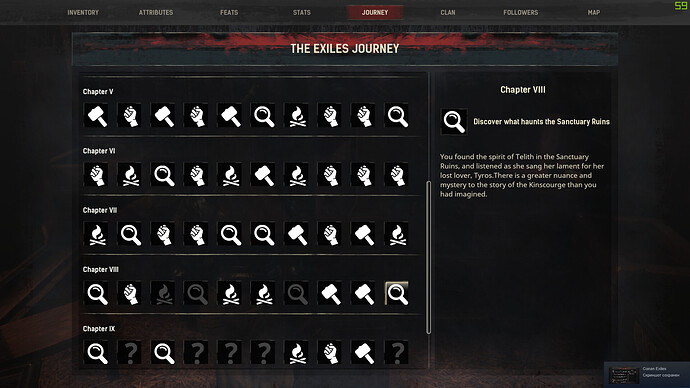 In this thread I’ve found that Telith’s missing ghost was reported YEAR ago.

She was never there, nor has she ever Song sadly. (it be nice of you could hear singing) There is small flower patch, that sticks out from rest. (WESTside) few short steps from beach. That is were main trigger point is. EDIT, West… I keep saying east when i mean west…LOL

Ignasis wrote:
"We’ll poke our team of ghost un-busters to see if they can bring back some of those melancholic spirits.
Thanks for the feedback."

So it has been almost a year and no fix. Shall I even waste my time describing bugs I’ve found in this forum section?.. A bunch of bugs that were reported on test server went to live version. Invisible sandstorms are not fixed. Khari armor still has wrong description: only one buff is guaranteed on 50% of armor. At least, weapon was fixed… ha-ha… That can be fixed in one day, for sake. But what I expect if there is the NPC missed for almost a year?..

I work in IT department, and you know, if I would do my job like that, I would be fired in no time. I just can’t understand WHY bug reports are ignored. Community is doing a great job saving a bunch of money on hiring some actual testers, but I don’t know any more if I should even bother to make topics here.

I raged at my server mates, I was like: “c’mon, stop whining in game chat, nobody reads that. You have forum with community managers, contact them, they’ll pass your bug reports to the devs, they’ll fix it, nobody will hear you here and fix something you don’t like”. Now I feel stupid because it seems that developers don’t care about forum reports passed to them by CMs, there is no difference between talking in game chat and reporting here

Forums are never an actual communications device from community to developer; they are simply a pressure safety valve so that the pissed off community can release some steam, and developers can get some feedback in aggregate (filtered and sanitized nicely by community managers, then safely ignored as the actual anger has by then been removed).

but I don’t know any more if I should even bother to make topics here.

Sadly I find myself feeling the same way.

We’ll poke the team again about this issue.
As per the rest of the post, it ranges from incorrect to mostly incorrect. Please, stop making assumptions. Many issues that have been reported have received a fix, but others have not yet. This is one of the later. Please let’s stop focusing only on those that haven’t been fixed when making a general assumption.
Once again, we have poked the team again about this issue and will report back once we hear back from it.

Thanks for the feedback and for your understanding.