We do have a few quick fixes for you on TestLive as we steer towards a more stable version of our new mechanics and addressing lingering issues as well. This will be deployed on all TestLive servers in about 30 minutes from now.

We’ve already put in Purge improvements with our previous TestLive update and more are coming. Even though there are no additional changes for this build we have more on the board for coming updates. Please let us know how the Purges feel going forward. Remember, just because your Purge Meter is full doesn’t mean you necessarily get chosen to get a Purge. It is still just a chance among all players/clans with a full Purge Meter.

We also reverted the server settings so we have each of the server types available for testing: PvP, PvE and PvE-C.

On to the fixes and improvements for this week:

We are constantly working on improving our patching process and are really thankful for your input and feedback. We do love working closely with you and thank you for the ongoing support

That is good to hear.as that could mean that Ymir will be a little less grindy for many players who want to try his religion out.

Dear lord. Have my prayers finally been answered. I avoid ymir like the plague cause of the 750 kills or so just to upgrade it!

Ummm… You might want to check into the server settings. Both PVP servers are at x1 xp multipliers, and the US_1 server says that it is in the EU region…

We will restart US1 to fix that serverregion, thank you for that catch

so they are not using the actual X1 multiplier you see listed. We will look into having that better clarified in the list though

Thanks for the patches and the feedback! That’s what I’m talkin’ about!

An observation about PVE-C: quite a few PVE players braved the kill climate and made homes on US1. I know it would mean a lot to them if you set it to PVE-C instead of PVP. On the server, as a minority PVPer I’m willing to move instead of them.

I love good people of the world and i don’t even play pvp-kinda making me change my mind that the pvp community is only 99% toxic.

FYI Dev’s,
I’m not sure if this has been caused by an passing angry Rhino, Decay or because of the update. It’s been a week since I last logged into my Testlive server, today, half the house is missing. 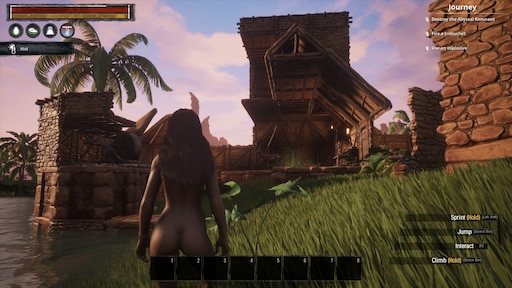 Looks more like an angry rhino or rhinos to me.

Nothing in the event log, just says Server Started, possibly the damage had been caused before the update.
Do Rhino’s ranndomly attack buildings?

I don’t mind that this has happened, just mentioned it in case others had been effected.

I dont think they randomly attack buildings. At least i’ve never had them do it unless provoked. Im about to swap back over from live to testlive and check my server to see if its all in tact.

Going from Live to Testlive today, I had to download 16GB !!.

oh dear god. hold on lemme log out of live and see

I’d also like to add to this:
I still have my wheel, yet the thrall is missing. It was in a sealed room.
Maybe the damage was caused whilst still in PvP mode, thrall stolen, then server restart to PvE.
Anyone else have missing workstation thralls since the patch?

I would bet on Decay, since it’s been a week. All of my benches were still in tact at the main base, and thralls in their stations.