Things that make you go Hmm

So yesterday while hunting down some new folk I went to some old haunts. Found a little tent with some books nearby.

E-Keying on the Relic Fragment said I earned one, but instead I received this scroll, I think. Pardon my noods. 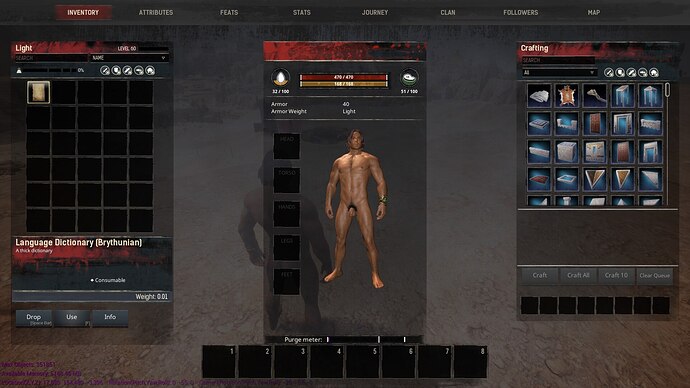 Instantly I said “Hmm.” @LostBrythunian is one of my very favorite people around here, so I was intrigued. Now I can leave notes in Brythunian, and no one on the server knows how to read them!

Maybe not new to you but new to this vagabond. Any of your own?

I’ve never known what the linguist stuff was for until now. Sweeeeeet

There are several language scrolls lying about. If I recall they make certain unintelligible writing in the world readable. Mostly for lore.

In concept they are excellent for leaving secret messages, but in practice, many people have discord or other messenger services to coordinate our of character for events.
Unfortunately adult language filters are still up when writing in the other languages (which now makes me wonder what the default language of the game is assumed to be) so no getting around the nannies by typing Hyborian equivalent of marde or scheisse.

As matters stand, there is a corner case where they may be utile. If one is coordinating with another clan to raid a mutual foe and do not want to share discord or other messaging services.

If we had dynamic/procedurally generated maps it would be excellent for marking resources or directions, even clues about puzzles (most of the puzzles in the game are fairly intuitive, but temperature warnings or notes to bring arrows for triggering panels might be nice). With maps as they are, they are quite well documented online.

As is, I think it’s a grand feature that lays the ground work for more development later.
One suggestion I might make is to have schematic fragments or recipe scrolls written in the language of the camp they are found in/dropped at.
Want to learn Stygian Invader armour or Stygian cooking (from a book), you need to have basic fluency in Stygian first.
But that’s just wishful thinking.

Oh, as for others, I think there are about two dozen.
Ranging from Stygian and Pictish to Khari and Acheronian. Living and (un)Dead languages are both available.

I can’t remember when exactly all those languages were added into the game but it was relatively recent. Primarily it’s just a flavor-thing for leaving notes, partially as a means of subterfuge as well as only people who know the language will be able to read it.

So far myself I’ve seen Hyrkanian, Ancient Stygian, and Khitani (though admittedly it doesn’t do much for me in single-player).

Primarily it’s just a flavor-thing for leaving notes, partially as a means of subterfuge as well as only people who know the language will be able to read it.

And also 100% worthless in single player. That’s part of the reason I still think they should have stuff written in those languages at least display as randomized hieroglyphics or whatever other text would be applicable with the translation underneath if you know the language. That way there would at least be some small RP value to be had from it.

In concept they are excellent for leaving secret messages, but in practice, many people have discord or other messenger services to coordinate our of character for events.

I think if I have a situation with a difficult slacker teammate, it might be interesting to passive-aggressively bag on him in Brythunian until he figured out where the “Magic Stool” is hid.

The other languages are neat, I have a couple screeds in various tongues with directions to free loot. It’s just this place on the map, I’ve never seen anything up there at all. The game delights, and because of a forum member I went Hmm.

It came about with Siptah. There are many about the map. Lots in various dungeons and places of interest.

That’s why I wasn’t certain and hedged my bet with ‘relatively.’ I couldn’t remember if it was part of siptah originally or if it got added in when they went through and added a buncha stuff to the island.

Well I guess Siptah is still relatively recent, especially for long time players. Theyre easy to miss if you are used to an area and dont expect to find them.

True dat. I thought it was a player tent and bedroll and I was about to be much happier. Instead I went Hmm. I didn’t even know Brythunian was a language.

Sorry, I cannot take responsibility for that bit of chicanery.

That said, (for anyone curious) in Howard lore, Byrthuians are the proto-Brythonic people. Ancestors of the people later known as Welsh (Cymric/Cymru), Cornish, or Breton. I always thought we were missing out not having them as a faction in game as we have Vanir and Stygians, ect…
So, the forum handle was sort of a what the cluck is a Brythunian doing here? This game doesn’t have Brythunians. Is he lost?

. I have it playing on my head now, omg I was a teenager back then watching MTV.
About the linguistic series, yes it started with the release of Siptah like all the fellow exiles mentioned above. We had it on exile lands at the same time but 2 languages were missing and @AstroPony fixed a thread asking for them. I tried to help searching all the map but I didn’t succeed. Finally @SirBowen informed us that they still didn’t include these 2 languages in exile lands map, but the magic part with Sir is that when these languages were added on the map he send a direct message to both of us informing us for it, this is Sir magical Bowen.
@LostBrythunian is a person with great value here for me too, his knowledge on the lore is great and educational so I always enjoy his threads, so +1 from me too for our fellow exile

If they are distinct enough to get a language book, they deserve a faction!
That’s a joke.
The argument to lump or split is always going to irk someone.
Are Bossonians their own people? Are they just a flavour of Aquilonian? Does Nemedia deserve a cultural pack while poor Ophir languishes? Is it wise to tell a person from the Upper Peninsula that they are just a part of Michigan?
While I am fond of Brythunians, I’m not campaigning for their distinct inclusion persay. A culture dlc would be nice. But not until the Hyrkanians and some of the Black Kingdoms get some love. No, I’m actively campaigning for beards for NPCs, but that’s only barely related… but does synchronize with the many “Hyborian” cultures.

Oh, on an aside, I am guessing that Aquilonian is the default language. I haven’t found a language dictionary for them and they strike me as one of the larger cultural foot prints in the greater (Hyborian) setting. I have found a book of their bedtime stories that didn’t require additional linguistic training to use.
I should crack open the admin panel and check.

Y’all gonna make me blush.
I’m just a grumpy ambiguously old man with a habit of reading far too deeply into most topics and insufficient propriety to keep my opinions to myself.

here is a little head up if needed.

Y’all gonna make me blush.
I’m just a grumpy ambiguously old man with a habit of reading far too deeply into most topics and insufficient propriety to keep my opinions to myself.

Yet without you, my discovery would’ve been a relative let-down. I thought I was getting a Relic Fragment, and instead it was a note scroll? What the deuce?

Here’s another one. Messenger’s Respite. Enter it before sunset on a perfect day, but north through The Crossway. Take along a beautiful person, and approach the scene right as the sun starts to wane, the cats, the pools, it’s so spectacular. You have these little quiescent moments in this game that make it such a valuable experience. Especially if shared.

It really is a beautiful setting and game.

I always assumed Aquilonian was a sort of Lingua Franca since they were the preeminent power in Hyboria. Part of the fun is trying to game out the little divisions and reasoning by Funcom - because you know that Joel knows his stuff so it’s not like choosing which peoples got their own categories would have been a fly-by-night operation. Like, Zingara is considered distinct enough to be a choice while Argos is still wrapped up in ‘Hyborian.’ Or that the inference I made of Ophirean (probably Kothian as well) being considered Shemite simply because of the Journals being labelled as such while Braga refers to Sanus as a Shemite.

That itself could be taken multiple ways. He could have simply been a shemite from Ophir. However, Ophir is considered a distinct culture from Hyborian as per Hour of the Dragon, they were already their own culture when Acheron was still around and overthrown so it wouldn’t be proper to lump them up with the others.

I found Atlantean the other day and was pretty stoked about that.