Sounds dumb. I’m talking about Kikomi (I call her Kiki as often as I call her Kiko) - not confused. Neither of us died. You did a bunch though - but again you’re massively exaggerating 8 or maybe 9 is nowhere near the 15 you’re trying to claim - your whole story here is like that - like only 2 of your low level thralls died and even then only because of pilot error. 80% of your base was not demolished… 10% maybe. And the base was whack - all open and unfinished with stairs and no doors or gates so the purge just poured in and choke points all over the place so indefensible - total n00b move.
I already know you level at the game. You know a lot of stuff as a collector (factoids). It’s great!

But if YOU would like to set up that purge in 3.0 (which if you were unaware is the subject here) and record it to prove some point you’re trying to make I’ll watch it. Sounds like fun.

geez i am talking about a different purge i spawned in private not the one i asked for help.

also that purge you helped was called with a convergence trap , and i build whatever, (was aiming for the beastmaster purge or the nordheimers , but got berserker purge.

all i can say about this nerf is that maybe this is the perfect opportunity to make purge thralls worth something again.
thralls should be as strong depending on how much difficult are to get.

this will help siptah be great again so surges are actually worth doing.

Specially figters since there is no real difference between a normal T4 crafter to a purge T4.

as for the rest of the changes i am fine with it, seemed dumb to me the teimos meta.

but really worried about the video of the sabertooth one shotting people again. its 2020 all over again.

Purge Fighters/Archers should be top tier for their respective regions. Hands down.

Looking at the Purge Map, which may not be wholly accurate still, but good as an example. 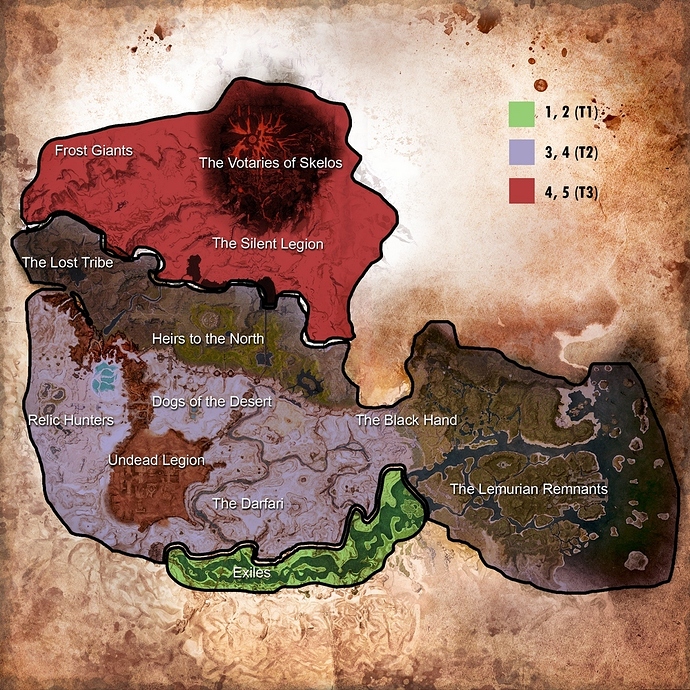 1000×1000 738 KB
A Relic Hunter purge thrall from the far west, should be the strongest thrall for that region. But not necessarily as strong as a Silent Legion or Votaries of Skelos one from farther north.

Or maybe this is a more up to date map:

The Purge is a PvE mechanic in Conan Exiles. It is a semi-random event that occurs based on players' actions throughout the Exiled Lands. The Purge involves an army of NPCs or creatures that randomly spawns on the map with the sole purpose of...

But overall, the principle remains the same. These are rare, so they should be the strongest possible for a given area, not necessarily all over the map however.

I never get why people act offended when someone suggests they are ignorant. All it means is that you don’t know something. And in this case I would say it’s very true. No biggy tho - you can learn it and then you will know. What, you’re expected to know everything??? I got news…

So… everybody should have to use the translator on an INTERNATIONAL site, just to figure out what you want. What if eventually everybody gets tired of this, and no one reads your comments, and IF you make an important comment, it will fade away without acknowledging.
YOU want to be noticed, to be helped, YOU have to translate what you want to say.
A lot of us use translator before/when commenting here, we don’t act (usually) like snowflakes. We know that people here understand english, and if one person (yes, the commenter) translates it and posts, is easier than everybody else having to translate themselves.
Do (almost) everybody a favor and just use that damned translator.

Ps.: do not tag the community in almost every of your comments, lot of the comments aren’t that important to have them tagged.

as a pve player you had the choice to take not the best t4 fighter from the best faction (because there is different faction having t4 from weak to strong fighters), so no nerf was needed, you want challenge, ok go in the wild with exiles faction fighter and problem solved.

i dont call you ignorant for not knowing something, (if that was the case, even when i know you dont know evertying there is to know about the game) no one knows, you can use so many words and expressions, instead of using one that is an offence. imagine if we start using words to describe others when there is a disagreement.

imho he got a very well deserved answer.

ie, i have told that thralls are not the thing you know the best, yet i have never called you an ignorant for it, you have provided information i was not aware (Such as the cook vs alchemist) same as i, the use of those words are totally unnecessary .

and as a pvp player you had the choice to… idk… not use thralls at all?.. not fight people or suck at it? simply throw loot at their feet?

All the choices were open for everyone…

Yes, people can play the game however they want to… WITHIN THE DESIGN BORDERS AND RULES OF THE GAME

and not based on their imagination… if those borders are moving because the developer and a very large portion of players all feel that they need to be moved, then that’s not called “removing a choice”… that’s called evolving the game… and in that context nobody cares about your choice, you do not have a “right” to it… this is not a freedom fighter coalition, it’s a game developer company trying to make a game

I will once again remind you that this game started out with NO FOLLOWERS at all… you only had crafter thralls… fighters and archers were merely static defense. So in order to get where we are and actually have OP followers… changes had to be made already… Now they’re simply trying to make changes again.

Make no mistake… I am not against thralls and followers, I also don’t want them to suck and be useless… But as long as they have more HP than me… deal more damage than me… I cannot call them “useless” and then think of myself as a reasonable person at the same time… Currently thralls are absolutely insane, every single picture, every single video I have seen of testlive indicates that they are still insane there, the change is not even remotely enough… but we’ll see I guess.

Jury is still out for me with regard to the thrall nerf but I am pretty sure I like it. I’m happy Teimos has been brought back to the pack, 100%. I’m enjoying the extra challenge and the extra caution with thralls in general - adds a bit of adrenalin. Have to say, used to be able to get a Cimmo Zerker at level 0 with average gear to easily solo spider boss south of the Sinkhole (before and after the Cimmo nerf). Not anymore. Level 13 Cimmo in legendary gear, just over 3000 hp… RIP. Is that too hard a nerf? Nah, just means I need better quality and tactics, can’t relax as much. That’s a good thing. But then I haven’t tried any of the harder bosses yet and not likely to till I get a RH Treasure Seeker or the Daicas I “violently befriended” today pretty well levelled and geared.

in all fairness. Those three zombies cost 3 RHTS and will be gone in a week but the point is very valid.

Why am undead zombie has more healrh than his leaving self ?

Why the do more damage than living one with a leg weapon ?

AM i the Only one seeing a problem with lógic here ?

The more health can be explained by being dead. The ability to stop a living person is dependent on just maiming/killing the person. With the dead, it’s not that simple. You have to hack at them to remove Newtonian Physics function which usually means destroying limbs and such (Deadspace is a game where this is actually done well)

As for the extra damage or for that matter the leveling experience…got me. Maybe because these reanimated have the souls of otherworldly soldiers that have the experience and the magical connection to another realm that enhances their power.

But requesting logic from a game with magic probably isn’t going to do well. If logic was to be used, your zombie would freeze up in the frozen north and decay rapidly in the jungle as it becomes maggot food…just saying.

Oh I know…I have already voiced my concern there and request a nerf of some sort because it will get ugly in PVP as 20 players all get their zombies up and running. worst case scenario if these players all soloed would be 1200 zombies on the server.

Oh I know…I have already voiced my concern there and request a nerf of some sort because it will get ugly in PVP as 20 players all get their zombies up and running. worst case scenario if these players all soloed would be 1200 zombies on the server.

well i play conan since early alpha, so yes i have known time where there was no thrall, i was even playing when npc thralls in camp had no ia and were not moving at all whatever you was doing to them. but again i simply point out that this is hard to consider thralls effective in pvp raiding system when you can kill them naked just in jumping on an obstacle and poison them. actually what i see with 3.0 is a very unbalanced gameplay for pvp siege raiding. but hopefully it s only on testlive for moment and is still time to make a balanced pvp game in siege system and sorcery because otherwise i cannot see how pvp gameplay can survive.