Can anyone point me in the direction of an easy to follow, accurate guide to what actually makes a difference ie food/armour etc when leveling up thralls. I’ve had a look at a few on YouTube and they are either outdated, or confusing (to me at least). Cheers in advance

I am interested in offering tavern quarrels by using my thralls with truncheons against any player who wants to have a fight w/o death for any of them (PVE-C RP server). I plan on leave truncheon and normal clothes for the player and its thrall, and place three thralls in same condition to fight. I do not want the player nor the thralls dead. Any suggestion on how to implement so? Thanks. 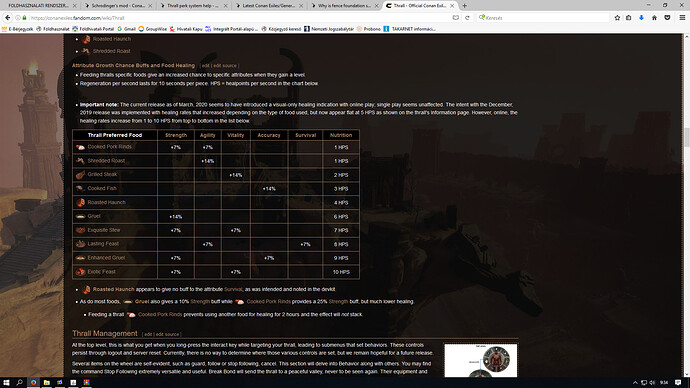 The buffs given by food should be visible in their inventory.

The other stats don’t do much, to be honest.

The other stats don’t do much, to be honest.

They’re not useless, but not worth raising in favor of the two you mentioned. Vitality seems to be the most important stat for thrall longevity.

Agility grants some extra armor, which is especially useful if you can’t afford the best armors for your thralls, and Survival protects against damage-over-time effects, which can otherwise be lethal. But if you have plenty of hitpoints, it kinda compensates for the lack of the other two.