Best advertisement for this Upgrade? Maybe Jens Erik frenetically yelling all features on stream while Tasche growling in the background.

Now we need the next DLC: Cosmetic gear for our pets to look even more cool and beeing distinguished by other players from normal mob! Like some harness out of bones, or bags.

Dear community. Please explain to everyone why so many changes are not displayed in the logs to the patch?
Just a quick example:

And there are no comments if this is a mistake. What’s wrong?

Will the event log be fixed anytime soon? It is still only showing server start messages on official 1504.

I recommend reading before asking about various fixes

it’s not in the patch notes we haven’t done any changes.

We all know that’s not true. There are changes that are not in patch notes, just as with the other update.

If it’s not in the patch notes we haven’t done any changes. Are they completely passive, even when attacked?

I think he was talking about the archers specifically, guys. Relax.

It would be nice to know if the harvesting tools are working as intended? For example, skinning knife is giving both hide and meat? It doesn’t seem like this was intentional.
Going on a hide or meat run leaves you with a bunch of extra stuff you don’t need.

DevKit update on the same day. A job well done Funcom. Thank you for actually listening to concerns. None of my mods have been updated since the latest release but many have been from last weeks part 1 update. Just to explain where I am standing. My game was unloadable even after disabling all mods. Server was in same boat. Today it is loadable. That being said, I have no idea if any of the many things I see wrong within the first 30 minutes of gameplay has anything to do with part 1 or part 2.

Cleavers are apparently random what it harvests nowadays. Using a cleaver on a shaleback the first time gave me hide, savory flesh, and feral flesh. I have never gotten feral flesh from a shaleback while using a cleaver. Never any hide from any animal from a cleaver. Skinning knives don’t seem to be affected. Still producing what it is meant to harvest. Hides. But the cleavers are all whacked up. No sense in having the cleavers in the game if they do the exact same thing as a hatchet or pick.
Character creation is smoother for controllers but jumping all around while trying to use mouse.
I saw right off the bat an exile npc that I have never seen before. A certain named one. Congrats on fixing a few things I suppose. Like bird heads. Working. Bravo.
Update: Skinning knives are NOT working as well. They are harvesting random meat. Something a skinning knife shouldn’t do because why then even have them. Just carry a freakin pick for everything because all tools now seem to do the same thing. Even getting heads from skinning knives.

Crafting multiple frontier building item stacks i notice the following:
I make 10 Frontier Foundations, 2 Frontier Fence Foundations, 1 Frontier Gate Frame and 10 Frontier Walls, and i see them in the crafting queue. After a while only the 10 foundations that i started with and the Gate are there. I test it again with Frontier Fence Foundations and Walls. When the fence foundations are build its no problem, they count down nicely to 0 in the amount i ordered. But the moment they switch to the next stack that whole stack disappears instead of that 1 is being made and the rest of the stack stays in the queue.

This was reported during testing as well and its working now as intended. It was weird that when you skin an animal that you dont get any meat.

My thrall deaths are not mentioned. I do get these messages now. 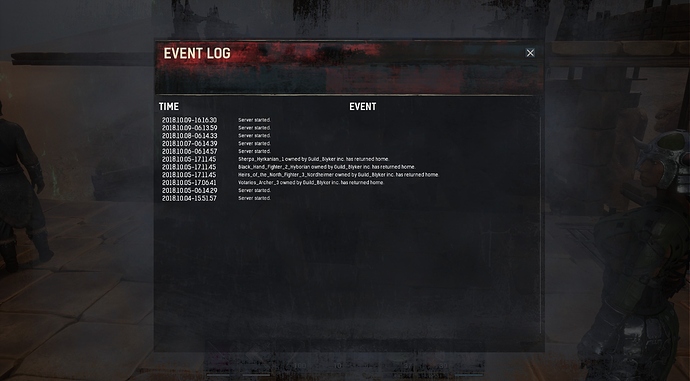 This is with all DLS. I mentioned this already 3 times. When crafting armor the same effect. The queue ends, if you create multiple items.
Apparently, they do not care.

Fantastic response to the Frozen North bug and release of dev kits for modders. I do have to concur with fellow community members that tools are not operating properly, to be specific the skinning knife and cleaner. This is an official server issue resulting in limited food portions to harvest and skinning gives less hide. Meant to be or a bug, not sure. This is a map issue, tested on PvP and PvE-C.

If it’s not in the patch notes we haven’t done any changes.

Come on now, we know from testing that stuff changes that are not in the patch notes posted here… right?

Awesome Pet System was my main DLC of all I wanted. Bought all DLC since other stuff this patch give free DLC goodies. YEA BABY!!!. I will not watch any video for Pet system Help at all since this I want to ENJOY! my way. I used to keep exotic pet my self real life. from Rattlesnakes to non Venomous type. Non the lethal creatures ever struck at me. Yea they knew I was Just a Beast as they are. So I will learned this my way or the Highway. Very excited to put my experiences of reality to see how close Funcom got to True Animal Care, husbandry. Unleash my Beast once again in my Soul. Enjoy everyone.

Feed Boxes - Currently, you can stash a pet cub in a pet or thrall feed box to increase decay time by 10x. 23.9 hours becomes 239 hours. Handy for when the pen is full if we’re going to be calling it a “feature”

Pens - Pet Cubs seem to be taming along nicely, but food in the pen appears to be unused over the course of several hours.

Well the system is out, no one has a clue how it works, and it doesn’t work, maybe do your jobs and explain how to make it work instead of not even announcing why it was updating on steam so I had to randomly stumble across the fact this came out. Oh wait you don’t care about customer service my bad.

instead of not even announcing why it was updating on steam so I had to randomly stumble across the fact this came out. Oh wait you don’t care about customer service my bad.

Really now? Okay then, guess these are just figments of my imagination.

Well the system is out, no one has a clue how it works

Explanation how to use the pet system on the Wiki