What's up with the fake errors? "pak file is corrupt", "game has crashed"

Also once a week or so the game loads fine, I see people moving about in the game world, but there’s a dialog in front of the game saying it has crashed. It didn’t crash, I can see things going along fine behind the dialog. But I close the dialog and it kills the game for me. Thanks.

for instance, if you are on an Official server experiencing this problem, it would be totally different than single player with mods.

Are you using mods?

Mods have pak files too, and not all mods are kept up to date.
If you are using mods try without them, then turn them back on one at a time to see which one is responsible.

Official PvE - when the game “crashes” I get the dialog to send the report to funcom, and I do that. Hope some good comes out of it.

Yeah, I get the fake pak file corruption error fairly often too. On official servers. I’m pretty sure the game doesn’t heal itself and just allowing it to crash out and then starting it again solves it 99% of the time. I guess it’s happened 20 to 30 times in past 6 months.

In my case it’s because I interrupted or paused the load sequence in some way. I dunno what else might cause it. I load the game from a very large and very slow HDD on a 5600X/2080Ti/64GB machine and play it in a 1440p window on a 4k HDR10+ 120Hz monitor. If I do something like try to move the game window at the wrong time during game load I will get that error.

Feel free to include this msg or a link to it if you do the bug report thing.

I’ve gotten this thing a few times since 2.8.1 but it’s something new to me: 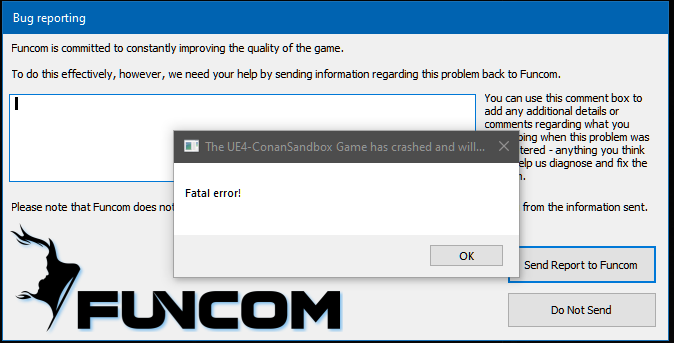 It happened 3 times right after or maybe even while the servers were updating to 2.8.1 - but then never saw it again since.

I’ve been getting this error too and made a thread about it. None of the fixes recommended by others has worked yet. I still get the error.

However, I posted the issue on steam as well around the same time. Someone mentioned disabling the “Virtual Technology” in the BIOS. Which is something you need for virtual machines. So if you don’t do that, you can just disable it with no issue. I’ve done that, but I haven’t played yet.

I’m going to be playing a little later today when the official servers are back up. So I’m going to see if that actually did fix it. The guy on Steam claims that it fixed his friend’s issues.

Also, make sure you report this issue to funcom and let them know all the fixes you’ve tried and how they don’t work. We need more people reporting this issue instead of just posting about it. because it’s been around since 2018 or 19 and still hasn’t been fixed. Hopefully this “Virtual Technology” thing is the answer. I wont know until I’ve played for a while and don’t get the error. But i’ve been able to play for few days before with no error, the out of no where it pops up again and then proceeds to happen over and over even after validating the files and completely reinstalling the game with no mods installed nor even subscribed to.

edit: Disabling Virtual Technologies in the BIOs did not help…I still get the same error. As before. I think this is something only Funcom can fix.