There have long been a issue with wheel of pain reseting on server restarts, making taming named thralls a pain in the butt.
But after the latest patch, it have been much worse. 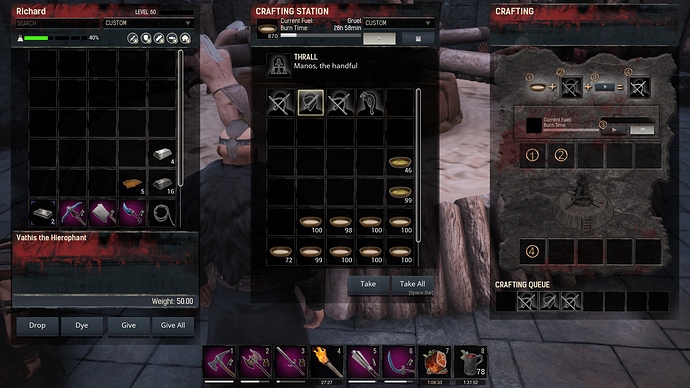 Not only do thralls reset, but even when done, the message that removing this thrall will destroy it comes up, and startng the wheel is not training all thralls in there…

This wheel consists of all named thralls that have been there all week… at this point in the game, all I do is collect named thralls, trying to “catch’em all” as they say in Pokemon, but… well…

Yep same issue here. These kinds of bugs are the stuff of an alpha/beta, not a fully released game. I am a patient person, but this game is train wreck. Don’t even get me started on the vanishing base bug. To keep losing so much work due to these types of bugs is beyond frustrating and after almost 2 years playing this game, at some point I just have to throw my hands up and walk away.

It is like every patch, you cringe at the idea of what they are going to break next and how much of your play time is just going to go poof.

And evidently others are having the same issue. Here is a steam forum post about it:

So I have my wheel of pain filled with thralls. They finished and no longer show in the queue on the bottom right. But when I try and remove them, I get the message, "Moving an unconverted thrall will destroy it, continue?" Is this a "new" bug after...

BTW I also posted about this yesterday here:

Game mode: [ (Online official) ] Type of issue: [ Bug ] Server type: [ PvP ] Region: [ USA ] Greater wheels of pain are broken and useless now. I’ve now lost about 6 thralls so far. Some come out converted but that is now rare. Most are not unconverted even after it shows them completed. They show completed in the bottom right of the queue but when you try and remove them into your inventory, you get the error message, “Moving an unconverted thrall will destroy it, continue?” I’d say out o…

Oh and one more thing. It isn’t just named thralls. I’ve had this happen with a tier 1 thrall as recently as yesterday. Most of my named thralls were not converting and I tried a tier 1 to test. It also did not convert.

So the question is, what is causing this? Is it the timer resetting after a server restart and that is bugging the thralls out?

The level 1 thrall was placed in the wheel long after the regularly scheduled morning server restart. However I have been noticing that they have been doing random server restarts periodically throughout the day for the last couple of days. So did the server reset while my tier 1 thrall was converting and that is why it bugged out?

Definitely something to test.

This is a horrible bug, virtually game-breaking as it means no thralls.

Is it just Greater Wheels of Pain? Every Greater WOP? Does it happen on new WOPs built after the patch?

Yeah excellent questions I’ve been wondering the same. Someone is just going to have to test those different scenarios.

The thing with bugs is they don’t always replicate for everyone, so even if a dev tries all the WOPS on the office pc, it may seem to work fine. It would be good if we could get more reports from people - if their WOPs are working or not etc. to help narrow it down.

I’m not able to say if mine are working as I’m taking a short break from playing while the update settles in. Gonna start a brand new game!

This is not an isolated report though, so someone will have to dive into the code at some point regardless.

Was your WOP placed after the patch? If no, have you tested things out on a new wheel? Just curious.

I have several WOP’s and all placed before the patch, and same problem on both medium as on large wheel.