Whole server on 1511 has been wiped

Not the WHOLE server but majority of it yes. Logged in to my house just a floating bunch of boxes and plants and thralls. Plus mounds was wiped , and all the portals , and other players some only been on there a few days some weeks some months. So random and a mess. Do they do Roll-Backs ? cause 1511 really needs it .

Server 1520 with same issue as well, many places are gone, everything floating with decay time still high

Do not tempt the gods or draw their ire. Nothing good comes from it.

huh guess they banned a lot of people that did nothing wrong now … so is just building and helping people and being creative and kind now against funcom’s ToS or some thing ? Banning and deleting peoples hard work that literally was not a issue , whole server we only had mostly one issue and that was at on 1511 at summoning area people were having a land claim war and splattering the whole area. Guess they just lost a lot of customers that are now wishing they didn’t bother to pay for battle passes and bazaar stuff. They didnt even bother sending a e-mail or any notice to any of the people.

Every time you log in the game tells you read the TOS. Try reading it.

On my server I swear it’s a contest to see who can set down the most blocks and cover the most area.
I think some one needs to make an instructional video on just what a path looks like and how mega builds effect server stability.
There is a difference between being artistic and just trying to turn a map square in to a plaza.

I’d like to see what people could do limited to 10K blocks.

And yes, i am all for setting block limits on official servers. You want to build Rome? Do it on your own server.

We only had a small area just by the aqueduct and it was all hollow since its not a PvP server and made a neat palace with books and a whole story people could come read , there was nothing wrong with it , and we been playing this since the game almost came out and pre-order. there was literally nothing wrong with our base, and one person had been there maybe 1 week and had a tiny sand stone hutt he definitely didn’t break any ToS . they just came in and whipped most all the server and benned half the people on it with no explanation. And this is the first time this type of thing has happened since day one atleast to us, or servers we are in , last time had issues with this some one had splattered T3 blocks all over springs so no one could make bombs much on a PvP server cause they did not want to be attacked. Took the admins months to come clear that out.

If you actually read the tos, They’re very vague. We’re a clan of 10 active users and our building block was at 16k. However, they’re still mass buildings causing issues. So i don’t appreciate the way you started the reply with such a condescending statement. 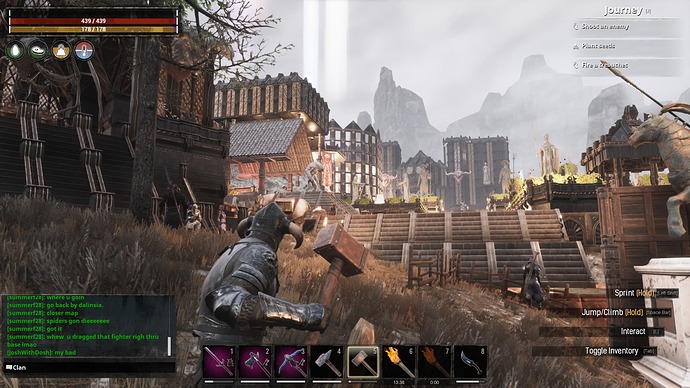 welcome to the wonderfull policy of funcom applied for now more than one year that make them lost 80% of their customers, but all is going well, those who hack and cheat run on all servers.

and i am still amazed that no executive at funcom realized what they are doing (excuse is that they do that to avoid lag on server, but bases, except if they are over 2map square never made lag server, at least on pc.

What numbers are you looking at for that %. Every one I look at show practically stable 7-10k players with bumps in for new content launches but levels back down to the 7-10k

what numbers simply all people i saw banned in reality of my gameplay when you are on a server with a 20+ community that is playing for serveral years on the server and that one day you see 3 hackers jumping on your server, using all thrrd party hack to raid everybody, and that a few days later you see admin of fc erasing ruins of raided bases and ban all the fair players that have been abused, except the guys who were using hack, you can may be think there is a problem.

I saw this happens 2 time on 2 differents servers,and i saw on this 2 servers 80% of cummuninty quit forever funcom games (and they were those who bought the game in early access and supported the company)

don’t know where you play, but state of pvp server is totally broken , and as indicated it this thread problem is here too on pve, you don’t see all videos on youtube of people saying the same stuff ? you want i help you with links ?

PVP was in trouble way before ToS enforcement. My servers went down from 10 to 5 actives back in 2020 with the only new folks being interserver raiders. When ToS enforcement came into full effect, the Siptah server i was active in that sat with that 5 active players jumped to 20+ within 2 weeks and has maintained this number for the past 8 months. The EL servers? Yeah still not great but I was in a dead server that go transfered to a semi-dead server with multiyear entrenched alphas that are still there and still out of compliance but since they only keep timers going and the server is low volume, I’m fine with these areas being “controlled” by these guys. But even this server is getting fresh action with NEW players that are doing typical noob stuff and a handful of older vets that came back (one gave away their experience level since they beelined to crevice but they are smart enough to level slowly to not be sus’ while the other one is completely advancing fast and I expect to see a base at the watcher of the passage during this weekend’s scouting rounds).

I see the people upset and the complaints …sure but the #'s that are playing is what I am talking about. If players are leaving in significant numbers, new players are filling in the voids. New players that weren’t coming in before. So even if your assumption is right and the vocal folks are representing a large amount of players that have fed up and left, their departure is not noticed because there is an influx of new players to fill in the void. So why weren’t we seeing new players coming on board before? My theory is that the established players push new players out that don’t subscribe to a certain way that Conan is played in the PVP world. With these toxic types of established players removed and/or neutered, the growth of the game should be seen.

I would like to share my experience till now. I started to play 2 years past pve-c, at least all regular players on my server was banned and leave the game, or return only time to time and leave again. There are almost only new players in the server, who never leave the server are an old group of trolls that gathered thogetter to mass report me to get me banned (had a base for almost two years and no lag, no other players complain, lag started on aug 22 on that server fc anounced ip change) so far so good, maybe my fault for failing to attend ToS in some point that still not knowing in what point i fell. A members of this group told me opnely in the chat that they report people to loot their bases when the ban is applied. The funny fact is that this group was banned in a range of private server, and only offical ones accept them. I think it is a cycle, you start the game play a little, start to suffer the lag and crappy performance, blame constructions (i was one that did it) so you reach end game buy some dlc and decorative stuff, add a nemedian room, add an argossean build near the water, build a sorcerer tower, when you see you grew a lot, get banned leave the game and other new player enters the cycle. Im trying it again with a base in circle with 20 foundations diameter and growing vertically. If even it was not allowed to do in officials so this game is not for building.

From what I’ve read on here @boobie was one of the main people sticking up for everyone to try and get answers. Think he got permanent banned on here however. Interesting

Ya our build was not nearly as big as the one in the pic too that is still there, it wasn’t tiny , AND we had a neighbor that had a small castle too that was quite tiny. When we hoped in the server was maybe 10 people or so more people came we helped them and it grew cause the nice community on the server 1511, then BAM ! randomly deleted and banned small through large not all large still ones WAY bigger around. Not even a email or word. Also dang that one by Crevice still there… that was bigger then the one we made and covered way more land.

yes i agree that pvp was in difficulty even before the tos, as the blatant hacking problem was already there and is the number 1 problem since beginning of conan. and that true that there is always new players that come to fill the void.

but the way tos was applied made think even worse, i mean serioulsy when you live several time an unfair ban, loosing all your hard work but in addition being treated like a cheater that you are not, there is more than a lot of probability that you become very upset. community that i see actually is may be 2%-5% of old players (those from early access that continue to play despite that) and the others are news players, they will stay in average 1 week or 2 weeks and leave. community that fc lost due to this policy were the one making servers alive, and newcomers are less and less. I mean with free week, pop of servers with 3.0 went to 5-15 players, now 3 weeks after, it’s 1-5 players (what i saw on 3 offi server). for the Tos applied one year ago, waht i saw it’s 2 servers alive with average 20 players that went to 1-5 players and never recovered population they had before ban of their players. they had become again around 15-20 players with 3.0. but now again they are 1-5. players average with a fast rotation of players.

unfair ban, loosing all your hard work but in addition being treated like a cheater that you are not, there is more than a lot of probability that you become very upset