Why in God's Name doesn't the Improved Armorer's Bench not Replace the Regular One?

Is this the same story with all the Improved Craft Benches?

I was hoping to replace the Regular ones with the Improved ones and be done with it.

because in order to improve something, you have to create that “something” before, so even being a bummer having to interact with the regular and improved station, it makes sense, build them next to each other and you’re good.

If all recipes could be make in one bench we would go crazy, too many icons.

but you do need a stove and a campfire… I can’t just cook meat on a stove. I can make spiced meat but not basic meat

Could have “drop down menu” for each category, for example, types of armour if scrolling is an issue

Improved Blacksmith’s Bench is fine as well, the only Improved thing I haven’t tried yet to see if it is different or requires both is the Preservation Box.

The only problem / issue is with the Armorer’s Bench needing both, everything else is working as you would assume / expect it would…

Improved preservation box just has double the space. I kept my original box to keep extra ice in.

Needing both a campfire and a stove makes sense because on a campfire you don’t choose recipes like you do on a stove, they function differently; this is not the case with smithing. The improved blacksmith’s bench completely replaces the original, there’s no reason the armorer’s bench shouldn’t do the same.

Having too many icons on the screen could easily be overcome by having a tab for each tier or type of weapon/armor.

I agree with CACO, you need both versions of the crafting stations in order to craft the higher level tools and armor.

came here to make a bug report, but now I am not sure.

You still have to scroll through them all, just in two workstations as you need to make half of the receipe in one, then finish the build in the other. Kinda “Developmentally Challenged”

Needing both a campfire and a stove makes sense

No it doesn’t. What can’t you cook on/in a stove at home that you can only do in a fire? We should be able to cook everything in the stove. Once we advance to a stove, we shouldn’t need to use a fire at all in our bases. A stove is meant to be an upgrade to a caveman’s fire else we would all have one in our gardens.
Kinda “Developmentally Challenged”

How silly is this: 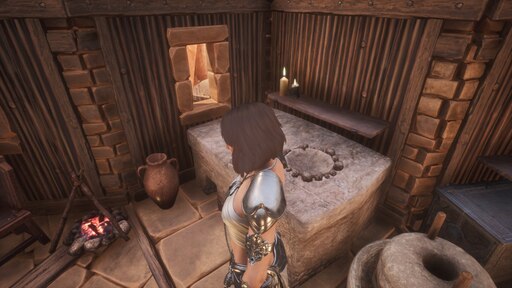 For now it does since they function differently, as mentioned above. If they functioned the same way and both used recipes from a list, then no, it wouldn’t make sense.

Comparing a fantasy world to reality is nonsensical. Can you craft a massive altar with your bare hands in a matter of seconds in real life?

Comparing a fantasy world to reality is nonsensical

You know that’s not what I was getting at.
There isn’t anything wrong with having all the fireplace recipes in the stove too.

There isn’t anything wrong with having all the fireplace recipes in the stove too.

I agree. I’d prefer if they did that as well.

I agree with CACO, you need both versions of the crafting stations in order to craft the higher level tools and armor.

Except that we do not actually need both versions of the blacksmith to make higher level tools (and weapons).

Whatever people think makes sense, the game follows no specific logic wrt improved crafting stations; with some you need both versions, with others you need only the improved version.
As far as i can tell only the armorer’s bench and cooking stations require both versions.

I think the more plausible explanation is that it was not well thought and/or poorly executed in terms of game design, just as the rare fish trophy requiring unappetizing fish to craft, and the ugly fish trophy requiring exotic fish. TL;DR: the devs messed it up, as they have messed up so many things.

Except that we do not actually need both versions of the blacksmith to make higher level tools (and weapons).

This.
The Armour Bench is the ONLY one that is different.

As to the Stove (and Improved Stove) not including ‘Grilling Meat’…that is bs. Also…that nice Fireplace ‘could’ also ‘Grill Meat’…just saying. Ohh…before the naysayers

I personally use a Fireplace with a Slide In Iron Arm for hanging over the fire to Roast/Grill Meat and cook stews when in the north…it is also the only heat in the small house.