WTF is happening to boss loot on isle of siptah?

IDk what happen this night… but from 7-10 boss kills i have got aways the same weapon…and 2-3 times nothing … but after all i am stuck with that weapon everytime. Is that a bug or ? 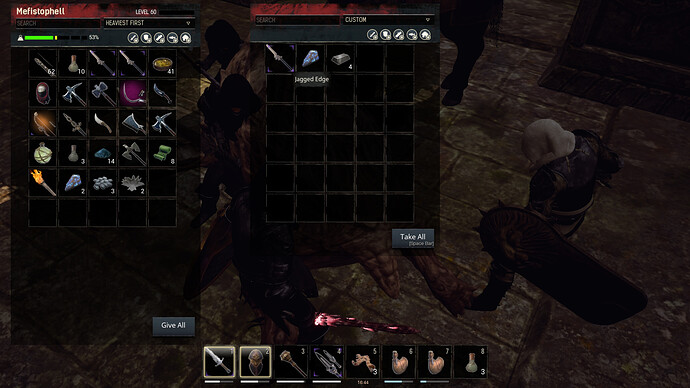 Helps to know what boss.

from everyone … the bouth skeleton close to the The tower , the one in Siptah Contemplation , and the bosses from Nex Luxur

I’d like to dig into the loot tables to help you with an answer, but can’t with the given information. I just need a name, or names.

i htink he is refering to the golden skeletons (there are 3 of them near the tower and one below siptah contemplation, (to be removed due to a upcoming camp)

the 3 golden skeleton bosses has different loot tables, the one that drops mastodon killer is near the tower and siptah contemplation.

None of the tower bosses drops Jagged Edge at least not on the current official live version of the game. I only know 1 boss that drops this specific weapon and that’s the turtle shown on the picture.

However, there are at least 2 more weapons that look similar. Curved Slayer and Graceful Night, they have different stats though. So my question to op is are you sure you are getting the same item and not 3 different ones that look alike?

There are a few bosses that drop only couple different things. A good example is the giant spider that drops either the akitiban blades or The Nemedian Helmet. No, I don’t think I spelled the blades correctly, no matter. I think the Undead Shaleback in New Luxor is similar, but someone needs to correct me on that. Also, the giant goblinoid that wanders around that other undead city in the West, seems to drop the same legendary ax most of the time. As far as other bosses, I don’t see a lot of replication in their drops, just my observation.

As far as I understand, the issue op is trying to get an answer to is why they are getting the same weapons from killing different bosses. I might be wrong though, either way they have now answers for both scenarios.

The issue is that i got same weapon 7 time in a roll from 10 bosses . I got not variation of some kind of wep . I have tog the same one , exactly the same one in a roll. End i have got the Jagged Edge from bouth tower skeletons aswell!

but did you read the name? because they look the same but they are not. did you get 7 times jagged edge from 10 different bosses because that is impossible according to the devkit

if you did get 7 times jagged edge from 10 different ones, then the next question is are you using any mods?

yes 7 Jagged edge weps …no i am on official server

Well, unless something changed. The golden skeleton does not drop that

Are we talking about the same skeleton?