I also saw that there was other stability was done. does that mean that some of the npcs camps are going to load better as sometimes they won’t load all the way or is that still being worked on

Hi!
Thank you for this update, and your work

I’m not sure if it’s just me, but I have no sounds in fight. Specially humans voices and animals, for the mob, thralls and my character. (when I fight and when I aggro)
I’m on xbox one x and it’s after update. Thank you per advance

Thank you so much for making my gaurds(Relic Hunters) useless so that my base could easy be looted on your official server. This may the final nail in the coffin

I have only came on the forums in the past to complain so here is my first well done. The update yesterday seems to have fixed the game crashing and has made it playable again. There seems to be a lot of people giving out about the relic hunters, the constant noise in bases and the armour heat resistance but none of this is as frustrating as the game constantly crashing. To celebrate im off to capture some more relic hunters

Dont even bother getting more relic hunters, they just change to performers after the server reset, Because funcom thought it was a good idea to break them, along with the armor disappearing on them, I know i said i wasnt going to be rude or anything but yes, goodjob funcom, you just killed your game by taking away everyones good thrall that werent too OP or broken or anything, they were fine just normal t4s that everyone liked, But if it is a permanent change even if you do give the armor back, your game is still going to lose a very very large amount of its players and it may die from this single update.

when is the dlc for xbox coming into the store? any new infos? still waiting

and second question: where are theese armors from? the one on the right is from the dlc, i can see it in the feats already but the others?? cant find those 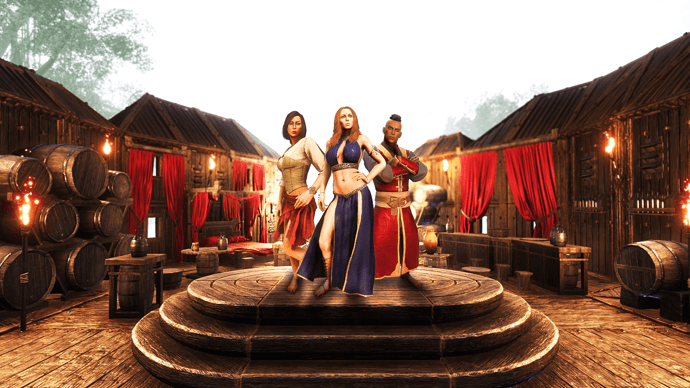 btw: the team which build those stage placeables - they missed the inverted staircase AGAIN… plsss somebody tell them that we need theese kind of objects - for EVERY building style not only for arena. cant be that hard not to forget those

I was able to buy mine finally about 20 minutes before the time stamp on this post.

Are you guys also going to fix banner being put down on pvp servers which causes the areas theyre placed near to become unraidable by bombs? because that also defeats the purpose of raiding if someone can throw a flag down on a pvp server whenever they want to stop their bases from being raided

I really dislike the new idle noises my thralls and character make - get a few together and it sounds like a hospital ward. Get rid of the noises. Also, why does my guy clutch at his gut when he stops running? Fix that, too.

Relic hunters placed after the update work fine. I had four in the wheel, I took them out and place them, they were the same as those before the update. Also a base defence should not be based upon one type of thrall. A variety of thrall types works best, mix in some cimmerian named thralls.

The work fine until the server resets, then they bug out again

Unless theyre cimmerian berserkers other players will pretty casually kill off cimmerian fighter 3s no problem, As i have done and also witnessed, Id have a better chance of using hyborians 3s over them which i do have but a majority of my thrall were relic hunters then i had friends who had their bases full of 200+ relic hunters which are now useless, And i know what a base defense needs so i kindly ask that you do not tell me that as if i dont know what im talking about, this is an issue that should not have even occured because in what part of this update did they even need to touch relic hunters or even break something unrelated to the new dungeon besides the what 9 new relic hunters that are not enthralled in the dungeon? captured thrall and wild/not captured thrall shouldnt be that close together on a list that they accidently break players thrall as a whole.

And yes they work fine until the next reset which was already stated, so it wouldnt be good to place any down right now unless you absolutely have to to defend against a raid or want to take one to a dungeon but youd lose that set of gear on the reset after until they fix it if you dont take the gear off first, And you also need to think about the players that lost multiple gear sets due to the thrall being killed off while in this state, Ive heard you cant even pick up the gear once theyre dead, And funcom wont be assisting players who lost gear to dead thrall they cant even loot it seems, Since they broke something they shouldnt have and wont compensate players for it even though there wouldnt be much of a way to do so in the game

Ty! We appreciate you!

New patch is out!

Hey everybody, We’re releasing an emergency hotfix to solve an issue that would cause thralls to revert to 100HP substitutes with no gear equipped. All previously equipped gear before the patch should still be there after the hotfix. We’re also aware of other issues introduced after the patch such as thrall idle noises being repeated too often. We’re working on those issues and a new hotfix will be released as soon as possible. Thanks for your feedback and support. [notes] [ai] Fixed an …